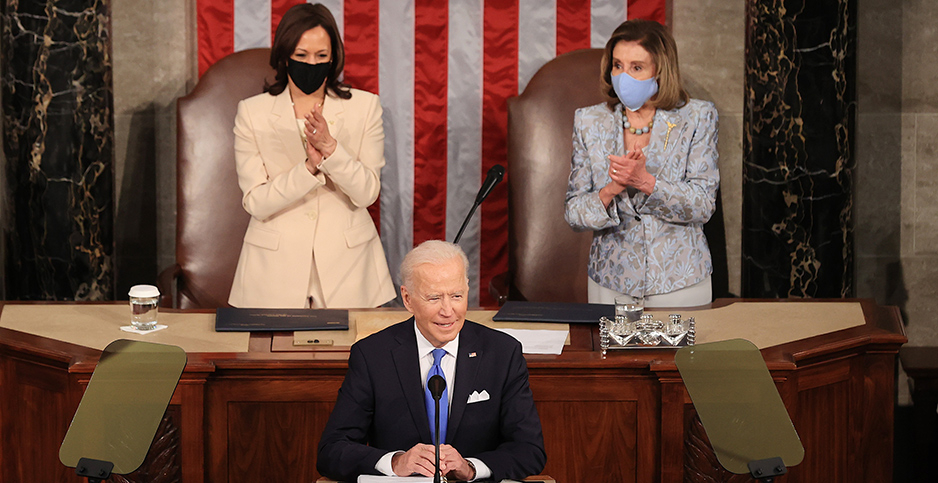 President Biden last night used his first address to Congress to deliver an unprecedented call for action on climate change as part of a sweeping infrastructure program while vowing global leadership from the United States in reducing carbon emission.

"For too long, we have failed to use the most important word when it comes to meeting the climate crisis: jobs. Jobs. For me, when I think about climate change, I think jobs," Biden said.

That proclamation was a marked contrast from his predecessor. In 2020, former President Trump not once mentioned climate change in his State of the Union address. Moreover, Trump’s reference to energy jobs was only to preserve those for fossil fuel companies.

Declaring "America is on the move again," Biden spent a large portion of his speech outlining how his $2.2 trillion "American Jobs Plan" would marry traditional infrastructure projects with new initiatives aimed at creating new jobs and greening the economy.

Unlike President Obama, who pushed for elements of the Clean Power Plan in his addresses to Congress, Biden did not discuss any regulatory schemes and instead stressed how climate action would spark employment.

That approach is a hallmark of Biden’s early presidency: tying nearly all government action to reviving the nation’s pandemic-damaged economy.

Biden said his proposed green-friendly efforts would use construction workers and engineers to design and build energy-efficient buildings, hire union-member electricians to install 500,000 charging stations for electrical vehicles across the country, and utilize tens of thousands of workers to build a modern electric grid.

"Our grids are vulnerable to storms, hacks and catastrophic failures, with tragic results as we saw in Texas and elsewhere during winter storms" Biden said. "The American Jobs Plan will create jobs to lay thousands of miles of transmission lines needed to build a resilient and fully clean grid."

Biden framed his infrastructure pitch as part of a broader push for environmental justice. At one point, he called for replacing all of the nation’s lead water pipes "so every child can turn on a faucet and be certain to drink clean water."

Many of Biden’s proposals drew applause from Democrats. His calls for ensuring that infrastructure efforts used American products drew members from both parties to their feet.

"There’s no reason the blades for wind turbines can’t be built in Pittsburgh instead of Beijing. No reason why American workers can’t lead the world in the production of electric vehicles and batteries," he said.

Biden reiterated his familiar refrain that infrastructure is a "bipartisan issue" and welcomed to the table Republicans who have recently been drawing up their own plan — albeit one that is far smaller at $568 billion. He said he would continue to negotiate with the GOP but warned that his patience was limited.

"Doing nothing is not an option, the rest of the world isn’t waiting for us," said Biden, his clearest sign yet that he may be open to moving an infrastructure bill under budget reconciliation rules that would allow it to pass the Senate with only Democratic votes.

Biden outlined several plans to raise taxes on the wealthy and corporations to pay for infrastructure as well as other domestic initiatives. He did not, however, mention a proposal floated earlier by the White House to crack down on tax breaks for fossil fuel companies.

In a clear break with the Trump administration, Biden emphasized the importance of the United States rejoining the Paris climate accord, one of his first acts after taking office.

"The climate crisis is not our fight alone. It’s global fight," he said.

Biden noted only 15% of carbon emissions are created by the United States with the rest coming from other countries. He said that if the U.S. keeps it commitments to reducing greenhouse gases, it would set a tone for other nations like Russia and China to follow suit and build a consensus to "save the planet."

Unlike past addresses, which are often raucous affairs filled with cheering and the occasional booing from lawmakers, last evening’s address was more subdued, with only 200 members allowed in the chamber amid the COVID-19 pandemic.

All who attended wore masks. Most Cabinet members, including the EPA and Energy and Interior department chiefs, skipped the speech in a nod to safety.

Lawmakers were spaced out one or two members to a row on the floor; senators and representatives sat in the otherwise empty visitors’ galleries. Their applause was quickly lost in the partially filled chamber. Many of Biden’s sharpest GOP critics were not in attendance.

Biden himself did not invite any guests and offered few of the personal anecdotes that presidents often utilize in their addresses to appeal to voters watching at home.

Instead, his remarks were serious in tone, none more so than when addressing the riots of Jan. 6.

"The insurrection was an existential crisis, a test of whether our democracy could survive. It did," said Biden, referring to the riots that shook the Capitol less than four months ago.

"We have to prove democracy still works, that our government still works and can deliver for the people," he added.