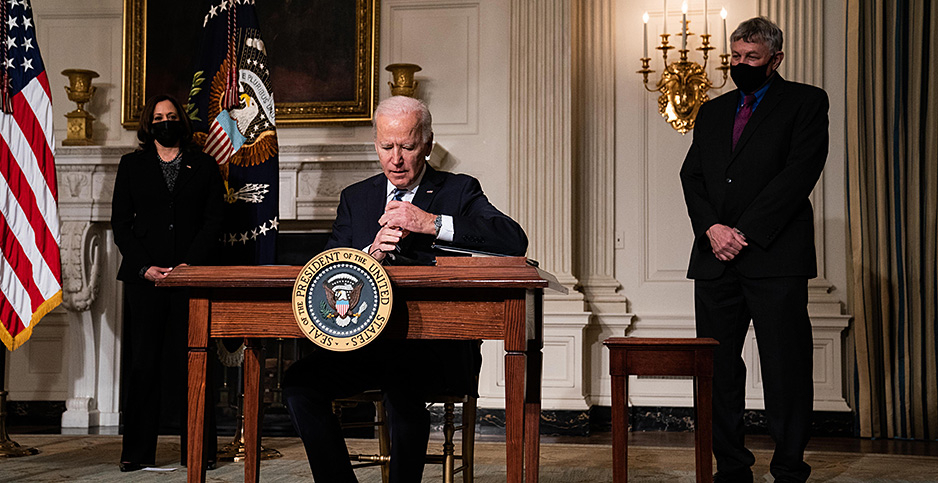 With the stroke of a pen, President Biden brought nearly half a century of environmental justice activism to its culmination yesterday.

Biden signed an executive order that promises a governmentwide approach to the disproportionate pollution burdens faced by many communities of color. But many advocates say Biden’s success on confronting environmental justice will be judged on how the order is implemented.

"As we framed it more than four decades ago, it deals with how these various issues intersect and how policy really needs to be formulated that shows that connectivity — where we live, work, play and learn, as well as the physical world," said Robert Bullard, a professor at Texas Southern University who is widely regarded as the father of the EJ movement.

"It’s very refreshing to see the work we’ve done on the ground … to see it writ large," he said.

Biden’s executive order seeks to put the country on a path to net-zero carbon emissions by 2050. But in a first for the federal government, the order identifies environmental justice as central to that work.

"We must deliver environmental justice in communities all across America," it says. "To secure an equitable economic future, the United States must ensure that environmental and economic justice are key considerations in how we govern."

To that end, the order makes significant changes to the federal bureaucracy.

It creates a White House interagency council on environmental justice, as well as a new branch of the Department of Health and Human Services. It refocuses the Justice Department, asking it to consider renaming its environmental division and establishing a new one dedicated to EJ issues.

And it sets a goal that 40% of funds the government spends on meeting its climate goals should flow to disadvantaged communities or programs that serve them.

WE ACT, an EJ advocacy group, found that more than 70% of Black Americans live in areas failing to meet EPA air quality standards.

That problem has been exacerbated by the COVID-19 pandemic, which has struck communities of color particularly hard (Greenwire, Sept. 30, 2020).

Interagency coordination has long been a goal of EJ advocates. Those communities face not only pollution burdens, but also housing, transportation and other socioeconomic hardships.

Environmental justice advocate and former EPA official Mustafa Santiago Ali said the multilayered coordination could be "transformational" in providing assistance for disadvantaged communities that have faced the brunt of pollution and poverty, made worse by the ongoing pandemic. But Ali also said it will be critical for the Biden administration to connect federal efforts with state and local government where the "rubber hits the road."

Historically, those issued have been siloed in the federal government within their respective agencies, making it nearly impossible for an assessment of the cumulative problems weighing on disadvantaged communities.

"This executive order is so much better than we’ve ever had," said Marva King, an EPA veteran and longtime EJ advocate. "But they have to look at it as how do all of the things impact a community that has been inundated with environmental, economic and social injustice forever."

Identifying all of those burdens has always been a problem for EPA and other agencies.

For that reason, the order requires the creation of a "climate and economic justice screening tool," which appears to build on a tool developed during the Obama administration — the EJSCREEN mapping program — that largely sat dormant during the Trump years.

EPA’s tool played a pivotal role in a Louisiana state court ruling last year in which a judge chastised regulators for failing to analyze how a massive petrochemical complex could harm the health of Black residents who live near the site (Greenwire, Nov. 20, 2020).

The approach is "all in one," Bullard said, "as opposed to somehow segmenting it, or placing it in a way that compartmentalizes it. That’s a very good advancement in accepting what environmental justice really is."

Activists will be watching closely to see how the order is implemented.

In some ways, they’ve been burned before.

In 1994, President Clinton signed an executive order that established an EJ office in EPA, following advocacy from Bullard and others.

But that office fell short of achieving some of its lofty goals. It lacked enforcement authority, and Congress never passed any legislation codifying Clinton’s goals.

Parts of Biden’s order directly amend Clinton’s, and there are some signs that Democrats on Capitol Hill will make another push for legislation.

Correctly implementing Biden’s orders would generate jobs, tackle climate change and ensure equality, which would in turn result in reforms that would survive should the White House change hands in four years, added Ali.

"If you do the work properly, it can not only be embedded, but people can see value, detractors will see value in this work," he said. "It makes it much more difficult and less likely that you will see folks moving back to an antiquated positioning."

The president directed DOJ to consider a number of options to prioritize environmental justice work — including creating a new office dedicated to protecting low-income communities and communities of color.

The president asked the attorney general — Biden has tapped Judge Merrick Garland of the U.S. Court of Appeals for the District of Columbia Circuit for the role — to consider establishing an Office of Environmental Justice within the department.

That office would "coordinate environmental justice activities among Department of Justice components and United States Attorneys’ Offices nationwide," Biden wrote in his order.

The language of yesterday’s directive appears to provide greater leeway for DOJ to structure its environmental justice efforts than did Biden’s campaign platform, which said the then-president-elect would establish an Environmental and Climate Justice Division within DOJ.

"What I think would make the most sense is if there is an office of environmental justice created up in the associate AG’s office," said Kelly Johnson, a partner at Holland & Hart LLP who worked at DOJ during the George W. Bush administration. "I think that makes it clear that while the Environment and Natural Resources Division obviously has environment in its name, there are other components in DOJ that can contribute to these efforts."

Those components include DOJ’s Civil Division and Civil Rights Division, she added.

"The Secretary of Health and Human Services shall, consistent with applicable law and within existing appropriations … establish an Office of Climate Change and Health Equity to address the impact of climate change on the health of the American people," Biden’s order says.

The executive order also includes new programs that caught the eyes of activists.

There is a "Justice40" initiative, which sets a goal of 40% of all governmentwide sustainability spending going into disadvantaged communities.

That can include investments in clean energy, efficiency, clean transit, affordable housing, clean water infrastructure, the remediation of polluted areas — among others.

Michelle Romero, national director of Dream Corps Green for All program, said Justice40 hits directly at a key theme of Biden’s announcement: that addressing climate change must include jobs and economic growth.

"He understands something that a lot of leaders have yet to understand," she said. "The only way to get out of this crisis we are in is to build an economy that is inclusive."

That idea is central to Romero’s work, and, she noted, other states have already enacted similar programs. California, for example, gives at least 35% of its revenues from its carbon cap-and-trade program to programs serving disadvantaged communities. New York gives 40% of its climate investments to EJ communities, and last December, Massachusetts, Connecticut and Rhode Island made similar commitments.

"It builds off of what other states across the country have begun to figure out," Romero said.

One program in California, for example, provides an electric ride-share program in the state’s agricultural center so farmworkers and others have access to health care. Another is an urban forestry program called Planting Justice in Oakland, Calif., that employs individuals who were recently released from prison.

The job opportunities are there, Romero said, if the right infrastructure is put in place.

Bullard, the veteran EJ advocate, said Biden’s order "sends a clear message that at the highest level of government that these actions will be taken seriously."

"The job ahead is to make sure we follow through," he said. "It won’t be easy. There is always resistance to change. We just have to keep working."

"It’s the answering of a prayer for those who gave their lives for this issue and those who are still continuing to be in the fight, folks gave blood, sweat and tears and watched so many people in communities fight diligently to have some basic protections in place, a set of resources and a true voice in the process," he said. "And we’re finally seeing those seeds that so many incredible early environmental justice leaders plant now bearing fruit."