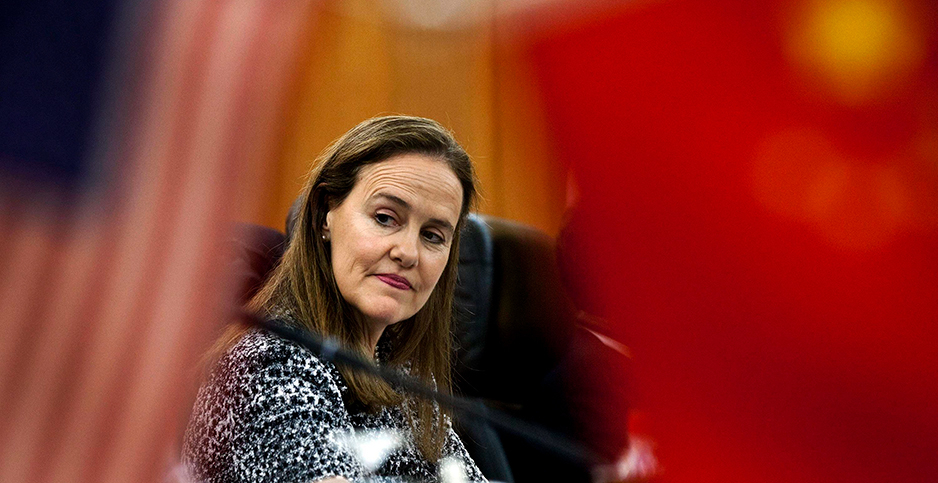 Michèle Flournoy, former undersecretary of Defense, is a contender for Defense secretary in the Biden administration. She's pictured during a bilateral meeting with Chinese officials in 2011. Andy Wong/Pool/Reuters/Newscom

A top choice to lead the Defense Department under President-elect Joe Biden is a climate hawk who would make the military an unlikely but powerful driver of his carbon reduction policies.

Michèle Flournoy, a former undersecretary of Defense in the Obama administration, views the Pentagon as a first responder to the effects of climate change. Flournoy has said the military can be an essential part of Biden’s climate policy by decreasing its significant carbon emissions and by being a large investor in clean energy.

"Over the long run, a greener Defense Department won’t just be more cost-effective — it will play an important role in addressing the climate crisis while also advancing U.S. economic competitiveness as a leader in green technologies," Flournoy wrote in a CNN opinion piece last month.

As Biden pencils in his Cabinet, climate advocates have focused on EPA, the Interior Department and obvious places where environmental policy is crafted. Far less attention has been paid to the Department of Defense, which has a massive budget and a large appetite for fossil fuels, observers said.

Flournoy, who’s among the contenders for Defense secretary, would likely reprioritize Pentagon spending to buttress climate-friendly purchases and policies, according to observers.

Biden’s transition team is a signal that his administration is moving toward an entire leadership team that takes efforts to address climate change seriously, said Francesco Femia, co-founder of the Center for Climate and Security and director of the International Military Council on Climate and Security.

"She has made it really clear in the past year that climate change is a really serious issue in terms of national security, and when assistant secretaries, deputy secretaries are being considered, the Biden team is actively looking for people who have demonstrated that they take climate change very seriously," he said.

If appointed, Flournoy would helm the Defense Department at a time when its budget is expected to shrink. The department, which accounts for about one-sixth of U.S. government spending, had a budget of $740 billion in fiscal 2020.

The Pentagon is the largest single consumer of petroleum in the world and the top consumer of energy in the United States. It provides housing and transportation for hundreds of thousands of people and could fuel a boom in both the electric vehicle market as well as energy efficiency.

That means changes to military operations can play a direct and powerful role in cutting fossil fuel consumption in the U.S.

Flournoy knows how to engage the Pentagon on the issue of climate from her previous stints, starting in the 1990s, when she served as President Clinton’s deputy assistant secretary of Defense for strategy, observers said.

Flournoy, 59, is a political moderate who might avoid Republican antipathy during a Senate confirmation process. She is on the board of Booz Allen Hamilton, a defense contractor, and she views China as a primary threat to U.S. dominance on the global stage. She has said that climate change is one area where the two countries can work together.

"There are a whole set of threats, whether it’s preventing the next pandemic, or dealing with climate change, or dealing with North Korean nuclear proliferation where, like it or not, we have to deal with China as a partner or we cannot solve the problem," she told the publication Defense One recently.

It’s unclear how much, if any, of Biden’s $2 trillion climate plan can get through Congress if Republicans remain in control of the Senate. It is certain that Biden will use executive orders, at least in part, to reverse President Trump’s attacks on climate rules and move forward on reducing carbon emissions.

The Pentagon offers one of the surest paths toward reducing the country’s reliance on fossil fuels, said Timothy Male, executive director of the Environmental Policy Innovation Center.

The military could set a net-zero carbon goal for its operations, other than active deployments, he said. Military spending can be pushed toward retrofits of military housing to make it more energy efficient and to purchase electric vehicles.

The military has long been a place for technological development, and money can be put toward the renewable energy industry such as advancing battery storage, Male added. Because military spending is one place where Republican lawmakers are less likely to seek budget cuts, the Pentagon may present one of the best opportunities for bipartisan agreement on climate policy, Male said.

"There’s less division over DOD’s budget than there is in other departments, and so I see that as being more likely to win in some of the stuff they ask for in the appropriations process," he said. "A lot of this work is through process and purchase."

Flournoy, who would be the first woman to hold the top civilian job in the Defense Department, noted in her CNN essay that the military operates thousands of cars, SUVs, vans and shuttle buses to move people throughout its properties. Replacing those with electric vehicles would not just cut emissions, it would save on fuel costs and give a boost to the auto industry, she wrote.

The military is responsible for powering and heating more than a half-million buildings and providing housing and workspace for hundreds of thousands of people. Retrofitting older buildings to be more reliant on renewable energy and more energy efficient would create construction jobs and yield savings, she noted.

"Greening the DoD enterprise isn’t just good for the environment and the economy — as many other large enterprises have learned, energy efficiency ultimately saves money and benefits local communities," Flournoy wrote.

Flournoy also wants the military to be able to respond more often to climate disasters such as extreme weather events. She said she wants to prioritize the way the Pentagon deals with climate change as a threat multiplier.

"Climate change is an existential threat to the species and to the planet, and so we need to think of it as part of our national security rubric and part of our national security priorities," Flournoy said at a June forum at the Center for Strategic and International Studies. "I do think that, you know, when the Pentagon has been allowed to sort of lean forward on this issue, in many areas it has."

The Biden transition teams are seeking Defense Department veterans with previous climate experience to round out leadership at the Pentagon, according to two sources familiar with the talks.

One of the challenges Flournoy could face if she’s selected to lead the department is to go beyond the climate focus established during the Obama administration, said Femia of the Center for Climate and Security. Using the military as a climate responder will help show the world that the U.S. is serious about cutting carbon emissions as it tries to revitalize its leadership on the global stage.

"The Biden administration is going to want to demonstrate to the world that they’re taking climate change seriously on all levels, on the diplomatic level, domestically in terms of reducing emissions and using their regulatory power, but also in the defense side," Femia said. "The Paris commitments are not enough, the voluntary structure there is not enough, and so the DOD can actually be helpful diplomatically in demonstrating this issue is seriously urgent on a security level."