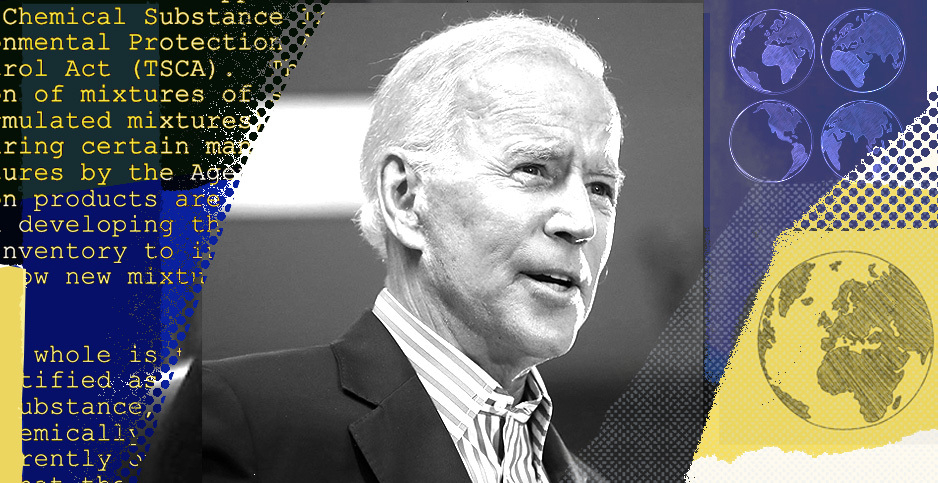 Some of the most significant environmental justice actions taken early under President Biden could run through a major toxic chemicals law.

Experts say they expect Biden to lean on the Toxic Substances Control Act (TSCA) to achieve important environmental pledges. That could include action on per- and polyfluoroalkyl substances (PFAS) and other high-profile chemicals, as well as revisiting some risk assessments made under the Trump administration.

Environmental advocates and experts see TSCA as a key mechanism for addressing and reversing work done by President Trump’s EPA, which took a deregulatory approach to evaluations and rulemaking. They view TSCA as a useful tool, one that could help the Biden administration make good on promises to vulnerable populations.

In 2016, Congress updated TSCA for the first time in decades in an effort to better regulate and assess toxic substances in the marketplace. One provision requires EPA to account for "potentially exposed and susceptible subpopulations" in its assessments. Experts say the Biden administration could use that consideration to help fence-line communities.

"EPA has to identify people who are going to be at a different level of risk," said Liz Hitchcock, director of Safer Chemicals, Healthy Families. "We’re not all starting from zero. Workers, people who live in communities on the fence line are at a greater risk because they have already been exposed."

Daniel Rosenberg, a toxics expert and director with the Natural Resources Defense Council, expressed similar thoughts and cited TSCA as a key environmental justice tool the Biden administration could use. Several prominent industry attorneys and consultants have also indicated they anticipate the Biden administration to heighten scrutiny of both the effects of toxic substances and the ways in which communities are exposed to them. Lawrence Culleen, a partner with Arnold & Porter LLP, and Jeffery Morris, former director of the Office of Pollution Prevention and Toxics, are among those who have highlighted the issue.

Morris wrote in late 2020 that TSCA "has powerful tools to identify people who may be disproportionately affected by exposure to chemicals, and if risks are found, to mitigate those risks." He said fence-line and Indigenous communities should be priorities for the incoming administration.

Groups including Earthjustice and Gulf Coast community representatives have submitted comments to EPA maintaining that the agency has an obligation to account for the risks chemical plants pose to people nearby. A major source of concern are chemical facilities in Texas and Louisiana, including those in areas like St. James Parish, La. (Greenwire, Oct. 29, 2020).

"The revised TSCA offers EPA an unprecedented opportunity to protect vulnerable and chemically over-burdened populations," the groups wrote in their comments to EPA.

Risk assessments: ‘A mountain to climb’

"We’re lucky with TSCA," said Betsy Southerland, former director of the Office of Science and Technology in EPA’s Office of Water, who now works with the Environmental Protection Network (EPN). "[Many things] can be fixed on day one."

One priority is risk assessments, as EPA has just wrapped its schedule of evaluations starting with the first 10 chemicals chosen from its preexisting work plan (E&E News PM, Jan. 14). In 2021, EPA is set to evaluate a new batch of chemicals.

Environmental groups were critical of the assessments completed under the Trump administration, and several said EPA will be under some pressure to reevaluate those. In its final risk evaluation for trichloroethylene, for example, EPA found the carcinogen poses a threat to workers. But some advocates and scientists said the agency understated the toxic substance’s risks and ignored multiple exposure pathways (Greenwire, Nov. 24, 2020).

Southerland said the evaluations are structured to be done once, increasing the pressure to potentially redo those issued under Trump. "It’s the last shot at getting workers and the consumer public protected," she said.

FTI Consulting, which works with industry groups, advised the regulated community that under Biden, there are likely to be expanded data submission requirements through TSCA. Longer review and approval processes are also anticipated, as well as reprioritization of certain chemicals. An evaluation of Trump-era reviews is expected, expanding beyond the "intended use" emphasis EPA has taken.

Substances under scrutiny include asbestos, the subject of a draft risk assessment that environmental groups called flawed (Greenwire, Nov. 18, 2020). EPA has been ordered to do a supplemental analysis of legacy asbestos uses following a court ruling from the 9th U.S. Circuit Court of Appeals in November.

Reevaluations would place some strain on EPA staff, who will also be turning to the next chemicals set for assessment. An analysis by the Environmental Data & Governance Initiative released in May found that EPA headquarters and laboratories that provide analytical capacity for TSCA have lost 13.1% of total staff.

Hitchcock of Safer Chemicals, Healthy Families said the agency is faced with challenges.

"Obviously, we’ve been critical of what we’ve seen," she said, referencing the issued final risk assessments. But she underscored the need for making progress on future assessments. "They need to keep moving forward; there’s a mountain to climb," she said.

All eyes on PFAS

Industry sources and advocates alike agree that regulating PFAS will be a priority for the Biden administration. While some actions could come under other statutes, like Superfund, the Clean Water Act or the Clean Air Act, Hitchcock said TSCA contains a number of tools the administration could use to address PFAS.

PFAS "have become the poster child and really illustrated what’s wrong with chemical policy," she said.

Some findings have shown PFAS exposure could hinder the effectiveness of vaccines, including for COVID-19, with outsize implications for low-income communities and people of color.

The chemical industry has criticized those findings, while advocates have said they underscore the need for action on PFAS (Greenwire, Nov. 19, 2020). In his environmental justice plan released over the summer, Biden committed to regulating PFAS as part of efforts to protect vulnerable communities (Greenwire, Nov. 10, 2020).

EPA could put a moratorium on approvals of new PFAS, in addition to giving the public more information about the PFAS currently in use. The agency, Hitchcock said, could use its authority to ask industry to conduct tests on particular chemicals. EPA could also rein in any new uses of PFAS through significant new use rules.

EPN’s Southerland said that how the Biden administration handles PFAS policy will help set the tone for its overall approach to chemicals. While other levers like Superfund law could be used to address contamination, she advised that TSCA’s major role is likely to be preemptive in protecting the public.

"What you want the TSCA program to be is the one that keeps it from getting out in the environment to begin with," Southerland said.