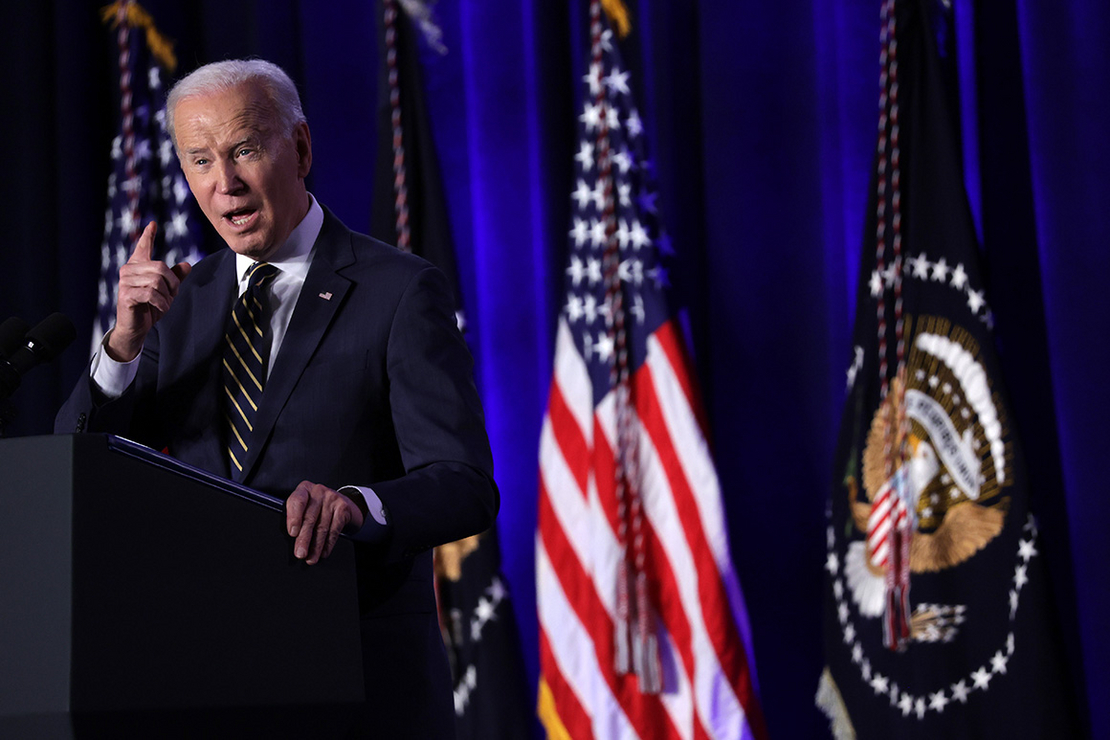 PHILADELPHIA — President Biden once again blamed Russian President Vladimir Putin for soaring gas prices and pushed back against claims from Republicans that his energy policies are harming the economy.

“Democrats didn’t cause this problem, Vladimir Putin did and we are working to fix it,” Biden said in the closing address here at the House Democrats’ annual retreat, where lawmakers sought to hone their messaging and legislative agenda ahead of this fall’s midterm elections.

Biden and top Democrats have taken to blaming Russia’s invasion of Ukraine for rising prices. Earlier this week, the U.S. benchmark price of crude hit $130 per barrel, though it has since dropped to around $109. Prices, however, had been rising for months even ahead of the Ukraine situation.

House Minority Leader Kevin McCarthy (R-Calif.) scoffed at Biden’s effort to pin the blame on Russia. “These are not Putin gas prices. They are President Biden gas prices,” he wrote on Twitter.

On Wednesday, the administration announced it would ban the import of Russian energy (Energywire, March 10). Polls have shown that wide majorities of Americans support the ban, even if that meant higher prices.

In his speech today, Biden noted average gas prices have gone up 75 cents a gallon since Putin began massing troops on the Ukraine border in January ahead of the invasion in late February. The national average is now over $4.33 per gallon, a record high, according to AAA.

Biden added that in his first year in office American oil production grew from 9.7 million barrels annually to 11 million barrels. He also said oil companies could do more to pump oil domestically, noting they have more than 7,000 outstanding permits to pump that are unused. He argued they were not pumping because they were instead looking to maximize their bottom lines.

Oil companies “would rather take those profits and buy back their own stock rather than take that money and invest in pumping new oil,” he said.

Biden also sought to buoy his party’s prospects by telling Democrats they needed to push back against false claims against his and their energy policies. Specifically, he blasted Republicans who have argued repeatedly in recent weeks that the administration’s decision to block the Keystone XL pipeline led to a spike in gas prices.

“Let’s get something straight here: The Keystone pipeline was two years away, it had been 2 percent finished. Give me a break!” the president said to chuckles and some applause from Democrats.

Biden acknowledged some lawmakers were frustrated that he had waited until this week to announce a ban on Russian energy imports, an idea that some Democrats have pushed for weeks. He said he delayed the announcement to build support for the move among NATO allies, whose energy prices will rise even faster under the sanctions than those in the United States.

Like in his State of the Union address, Biden sidestepped any mention of passing his $1.7 trillion “Build Back Better” climate and social spending plan, which has stalled in the Senate.

Biden praised Democrats for passing last year’s $1.2 trillion dollar infrastructure law, arguing it would “transform America” with 4,000 projects expected this year alone. He also mocked Republicans for now taking credit for the new infrastructure spending, despite voting against it.

Biden did not mention any plans for executive orders in the coming months, an idea House Democrats have repeatedly floated at the retreat this week as a way around an evenly divided Senate (E&E Daily, March 11).

House Speaker Nancy Pelosi (D-Calif.) did not rule out executive orders in remarks to reporters this morning. “It’s very important for the executive to act if you cannot get legislative action immediately. But there’s nothing in my view, there is no substitute for legislating.”