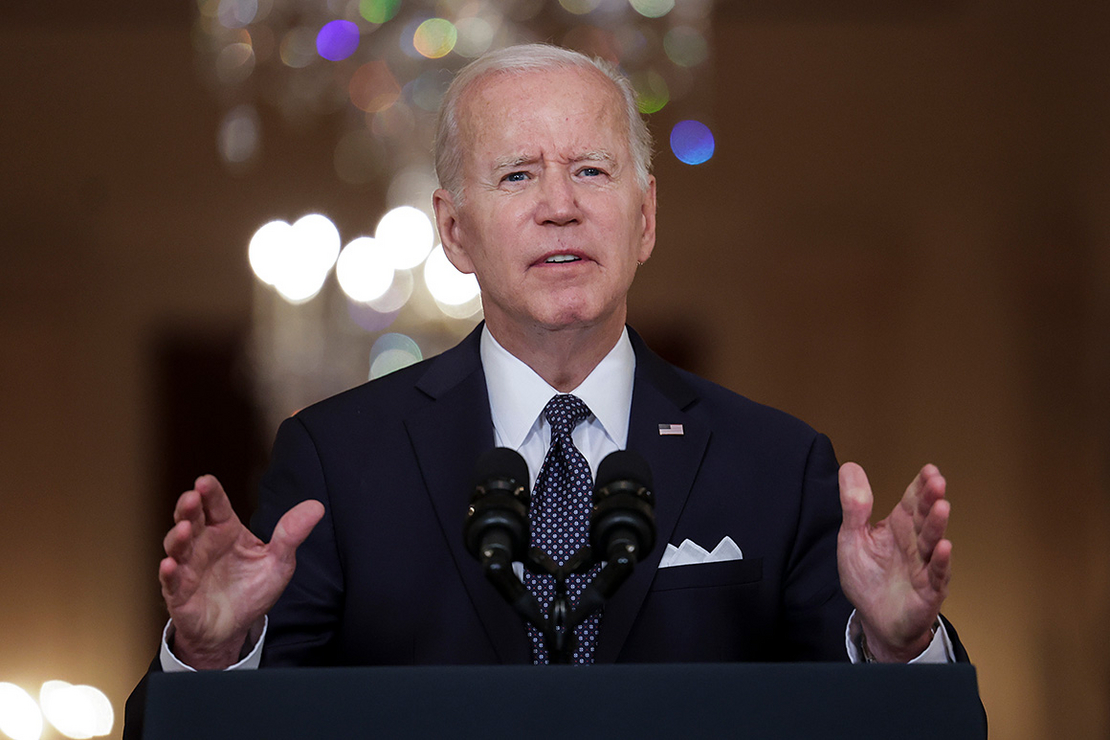 In a series of executive actions, Biden issued a preemptive, two-year waiver on solar tariffs that could emerge from an ongoing Commerce Department probe. That largely placated solar developers and trade groups, who have for months expressed outrage over the Commerce review and claimed it would wipe out the United States’ chance to meet climate goals.

The president also authorized the Energy Department to invoke Defense Production Act (DPA) powers to help scale up domestic manufacturing of solar panels and other clean energy technologies ranging from electric heat pumps to hydrogen electrolyzers (Greenwire, June 6). Two new federal strategies will speed up government contracts for solar electricity produced with made-in-America equipment — a move that a White House fact sheet predicted would result in 10 new gigawatts of U.S.-made solar panels over the next decade, more than the country’s entire current capacity.

“It takes time [for solar manufacturers] to come online, and we’re building a bridge to get us there,” said one senior administration official on a background press call yesterday.

The comments prompted some energy analysts and environmentalists to speculate that the Biden administration could be taking a turn toward a more aggressive use of executive power for climate policy.

“Now that it has arrived, we would not rule out a still-bigger assertion of fiat powers, including a climate emergency itself (although perhaps not until after mid-term elections),” they wrote.

Jean Su, director of energy justice at the Center for Biological Diversity, said the actions signaled the president was “willing and able to use his broad executive powers on climate.”

“This is a tremendous sea change in the Biden administration’s approach to climate action,” she said in a statement.

Pol Lezcano, a solar analyst at BloombergNEF, said the two-year tariff waiver would prove to be “a victory for both solar developers and manufacturers based in Southeast Asia” as well as U.S. utilities and system operators that had counted on solar installations coming online.

“This would solve the biggest problem for developers, which has been module availability,” wrote Lezcano in an email.

But other solar supply-chain issues, like shipping delays and inflation, may grind on, he noted. “[T]he reality is that shipping delays are still a problem and that developers and module makers will probably review their agreements for any potential threat of the exemption failing.”

That point seemed underscored by an annual survey with renewable investors and developers released by the American Council on Renewable Energy (ACORE) this morning.

Before the Commerce inquiry was announced, more than half of renewable developers were already planning to delay projects that were supposed to come online in 2022, due to supply chain issues unrelated to the inquiry, the survey found.

Lezcano added that the importance of Biden’s Defense Production Act move could have limited effects for solar manufacturing.

BNEF projects U.S. demand for solar to be around 23 gigawatts to 39 gigawatts over the rest of the decade — considerably more than the 10 gigawatts of solar panel manufacturing capacity targeted by the White House for 2030, he said. That would still leave a supply-demand gap. And the new actions would not appear to help U.S. production of upstream components like cells, ingots and wafers.

“What’s really needed is help from Congress with support for manufacturing,” Lezcano wrote.

Still, the presidential proclamations come after months of conflict within the solar industry over the Commerce probe.

Auxin Solar, a California panel-maker, had asked Commerce in February to investigate whether to slap new tariffs on solar panels and parts from four Southeast Asian countries, arguing the measure was necessary to combat trade-law circumvention by Chinese manufacturers.

Its CEO, Mamun Rashid, argued that if such “cheating” by Chinese companies was indeed occurring, the tariffs would prove to be “good for America.”

“It would allow us to be energy-independent,” he told E&E News in an April interview, while dismissing solar trade groups’ warnings as “fearmongering” (Energywire, April 29).

Rashid criticized Biden’s move in a statement yesterday, accusing the president of “significantly interfering” in the Commerce Department’s investigation.

“By taking this unprecedented — and potentially illegal — action, he has opened the door wide for Chinese-funded special interests to defeat the fair application of U.S. trade law,” said Rashid.

ClearView analysts, in their research note, raised the prospect of a legal challenge to Biden’s two-year waiver.

“[W]e anticipate legal challenges by domestic solar manufacturers and like-minded parties,” they wrote, while cautioning that the authors were not “legal practitioners” or judging the legality of the move itself.

Samantha Sloan, First Solar’s vice president of policy, said the use of the Defense Production Act was “an ineffective use of taxpayer dollars and falls well short of a durable industrial policy,” such as the tax credits for domestic manufacturing being debated in Congress. “Quite simply, the administration cannot stick a band-aid on the issue and hope that it goes away,” she said in a statement.

SEIA and other renewable groups, like the American Clean Power Association (ACP), had blamed the probe for causing “the most serious crisis” ever faced by the solar industry, given that the majority of panel imports come from four Southeast Asian countries.

When Commerce announced it would open the probe in March, SEIA warned that as much as two-thirds of all utility-scale solar projects could evaporate. And the ACP accused Biden of “empty rhetoric” on climate (Energywire, March 29).

Those trade advocates subsequently marshaled support from some Democratic lawmakers, who called for a quick end to Commerce’s investigation. Many of those lawmakers, such as Delaware Sen. Tom Carper and Florida Rep. Kathy Castor, issued statements yesterday cheering the president’s proclamations. Some Democrats in Congress like Sen. Sherrod Brown of Ohio and Rep. Bob Casey of Pennsylvania had backed Auxin’s tariff petition.

Senior Biden administration officials said yesterday during the press call that the the executive actions did not mean Commerce would necessarily conclude new tariffs were unwarranted.

“This administration is steadfast in support of the integrity of the processes of the people involved in carrying that out, including the civil servants at the Department of Commerce,” said one official.

Biden’s Defense Production Act authorization — the second major piece of yesterday’s White House plan — will set in motion a planning process led by the White House and Energy Department, which has previously concluded that a carbon-free goal in 2035 would require anywhere from 37 percent to 44 percent of the grid’s power would need to come from solar.

Under the plan, the Energy Department needs to define exactly how the DPA will be used to accelerate clean energy manufacturing. DOE and the White House will be convening members of industry, labor unions and environmental justice groups to inform that definition, according to a White House fact sheet.

The importance of that process may reach well beyond the solar sector, however. Several of the technologies the White House said would be subject to the DPA are not directly tied to the solar industry fight.

Building electrification advocates, for example, have spent months pushing for the administration to invoke DPA powers and guarantee contracts for electric heat pumps, a technology considered a chief alternative to gas boilers.

That campaign was originally conceived as a response to the war in Ukraine, as a way to encourage U.S. manufacturers to produce heat pumps and ship them to Europe, where they could displace Russian gas as a source of building heat (Energywire, April 1)

Ari Matusiak, CEO of Rewiring America, praised Biden’s DPA authorization as “directly in line” with what his group had sought in its earlier plan and said it could create a half-million U.S. jobs in installation and maintenance.

Bill McKibben, an environmentalist and co-founder of 350.org who was an early proponent of invoking the DPA as a response to Russia’s invasion, called it “a big heat pump victory” in a newsletter and credited the president with doing “something admirable.”

“This single measure obviously doesn’t solve our problems, in Russia or in the atmosphere. But it’s a hopeful sign that we can still get something done,” he wrote.

Advocates of low-carbon hydrogen were similarly supportive, saying they expected the DPA backing to help scale up U.S. production of equipment that is essential to diminishing hydrogen’s carbon footprint, such as fuel cells, electrolyzers and platinum-grade metals.

Traci Kraus, director of government relations at Cummins Inc., said her company — a producer of fuel cells and hydrogen electrolyzers — would actively provide input as the Energy Department creates labor provisions and domestic content requirements along with the DPA backing.

“If there are labor requirements or domestic content requirements associated, sometimes that might offset the cost — the savings you get in scale,” she said.

But she lauded the administration’s idea of linking solar power supports with other technologies that rely on clean power resources, such as electrolyzers, which can separate hydrogen from water using wind or solar electricity.

“The solar tariff actions impact all of these technologies by having access to affordable renewables,” said Kraus.