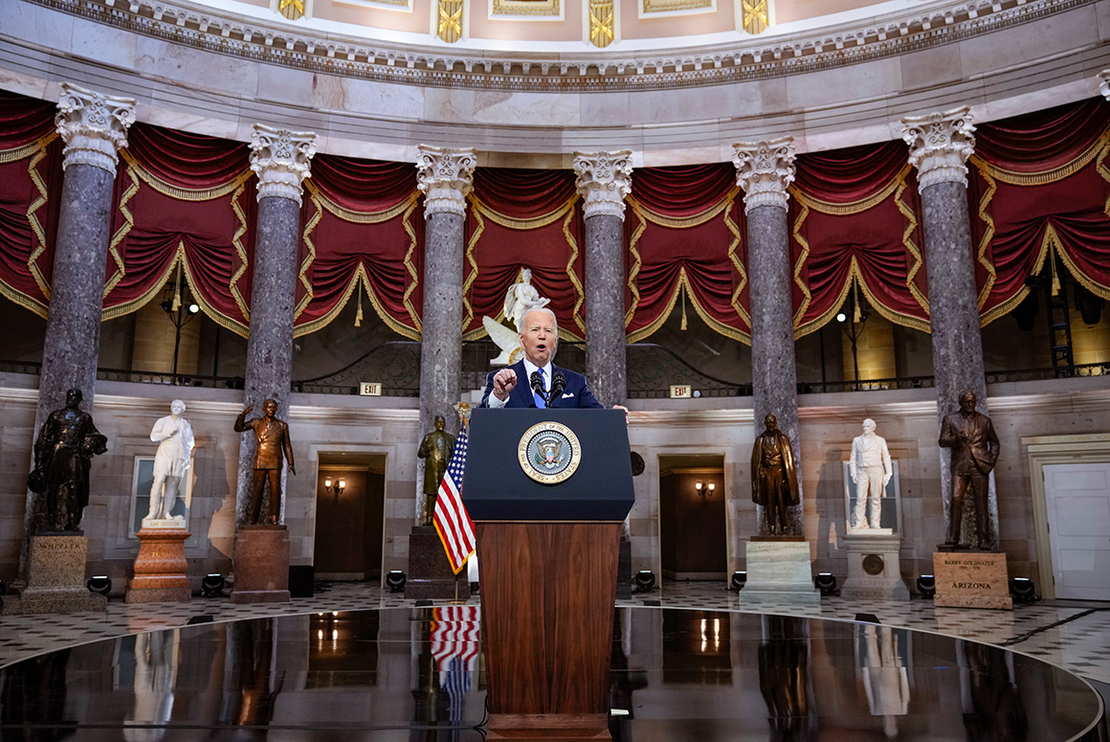 President Biden delivered a blistering speech this morning to mark the first anniversary of the Capitol assault, accusing former President Trump of spreading a “web of lies” about the 2020 election and vowing to “stand in the breach” to defend the nation’s soul.

Speaking from the National Statuary Hall in the Capitol, which was ransacked by Trump supporters a year ago, Biden spent much of his 25-minute speech denouncing and condemning his former election opponent without once naming him.

The remarks are the strongest comments Biden has made yet in the wake of attempts by Trump and his supporters to overturn the election and rewrite state election laws, a sign that the White House continues to see those efforts as a threat to democracy.

“I did not seek this fight brought to this Capitol one year ago today. But I will not shrink from it, either. I will stand in this breach. I will defend this nation, and I will allow no one to place a dagger at the throat of democracy,” he said.

The president added, “We are in a battle for the soul of America,” echoing what was perhaps his top 2020 campaign theme.

Biden said Trump was acting out of selfish interests, saying the former president could not see beyond his own loss. Biden labeled Trump the first president in the nation’s history who tried to subvert the peaceful transfer of power.

“Here is the truth: The former president of the United States of America has created and spread a web of lies about the 2020 election,” Biden said. “He’s done so because he values power over principle … because he sees his own interest as more important than his country’s interest and America’s interest, and because his bruised ego matters more to him than our democracy or our Constitution. He can’t accept he lost.”

Vice President Kamala Harris, in remarks ahead of Biden’s, called for the Senate to pass voting rights legislation. She did not explicitly say, however, whether Democrats should alter the chamber’s rules to eliminate the prospect of a Republican filibuster.

Speaking to reporters as he left the Capitol, Biden stressed that he was seeking to heal the nation, not engage in a running feud with Trump.

“The way you have to heal [is] you have to recognize the extent of the wound. You can’t pretend. This is serious stuff. And a lot of people — understandably — want to … just as soon not face it. You gotta face it. That’s what great nations do. They face the truth, deal with it, and move on,” Biden said.

In a series of tweets, Sen. Lindsey Graham (R-S.C.), one of Trump’s strongest allies on Capitol Hill, called Biden’s speech a brazen politicization of the Jan. 6, 2021, events.

"The Biden Administration seems to be incapable of dealing with the challenges America faces, and their efforts to politicize January 6 will fall flat," Graham wrote.

“The only way we’ll truly move forward from Jan. 6 is by speaking truth to power,” said Senate Majority Leader Chuck Schumer (D-N.Y.). “We cannot avoid it — the truth about what happened that day, about what led to the violence, about what it means for democracy moving forward."

Schumer said he “was within 30 feet of these nasty, racist, bigoted insurrectionists” as he was rushed out of the chamber by his security detail.

Schumer said that if one of them had a weapon, they could have easily attacked him or impeded his escape. The fear was compounded, he continued, when he learned after the fact “that one of them reportedly said, ‘There’s the big Jew; let’s get him.’"

Schumer, like Harris, used his remarks to pitch Democrats’ voting rights legislation as a policy solution to help fortify Democracy against “the violent whims of lies and even mob rule.”

That does not include, he argued, measures circulating around Capitol Hill to tweak the Electoral College vote-counting process without larger voting reforms. He dubbed such efforts a “cynical idea” for their ability to embolden partisan state legislatures to “say which ballots count and which do not.”

“I call on all Americans — Democrats, Republicans, independents — to rise to the occasion and assure that the mob violence, the lies do not win the day,” Schumer said.

Numerous Democrats followed Schumer to make remarks about the anniversary and share recollections. Many Republicans are in Georgia today for the funeral of former Republican Sen. Johnny Isakson.

Senate Minority Leader Mitch McConnell (R-Ky.) said in a statement, “January 6th, 2021 was a dark day for Congress and our country. The United States Capitol, the seat of the first branch of our federal government, was stormed by criminals who brutalized police officers and used force to try to stop Congress from doing its job."

He added, “As I said yesterday, it has been stunning to see some Washington Democrats try to exploit this anniversary to advance partisan policy goals that long predated this event. It is especially jaw-dropping to hear some Senate Democrats invoke the mob’s attempt to disrupt our country’s norms, rules, and institutions as a justification to discard our norms, rules, and institutions themselves."

‘Defenders of our democracy’

At noon, roughly 30 members gathered on the floor of the House to hear from Speaker Nancy Pelosi (D-Calif.) and observe a moment of silence in honor of three police officers who died as a result of the Jan. 6 riots: Brian Sicknick, of the Capitol Police, who sustained attacks from the violent mob, and Howard Liebengood of the Capitol Police and Jeffrey Smith of the Metropolitan Police Department, both of whom died by suicide.

Lawmakers also bowed their heads in remembrance of Billy Evans, a Capitol Police officer who died months later in a vehicular attack outside the Capitol on April 2.

Pelosi called them — along with other law enforcement officials, employees of the Capitol complex and aides to members and committees — “defenders of our democracy” whose “courage and … patriotism remain an inspiration.”

“Because of them,” she continued, “Congress was able to defeat the insurrection, to return to the Capitol that same night” to certify the results of the 2020 election.

She also exhorted members to "remember the words of another president — our patriarch, President George Washington — when he delivered the Constitution to Congress. He said this: He said, ‘This Constitution represents the creation of a government which would allow for the continuation of rigorous debate but relies upon the common sense and good faith of the American people to find the better angels of our nature.’"

While Pelosi’s speech made no reference to Trump or his Republican followers, the only Republicans who participated in the House floor memorial today were Rep. Liz Cheney of Wyoming — who lost her party leadership position for continuing to criticize Trump’s role in the Capitol attack — and her father, the former congressman and vice president, Dick Cheney. The two Cheneys stood in the front row on the Republican side of the aisle for the brief gathering. 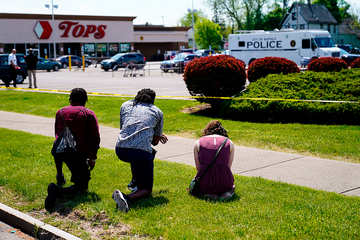