Biden digs in on climate: ‘Save the planet’ 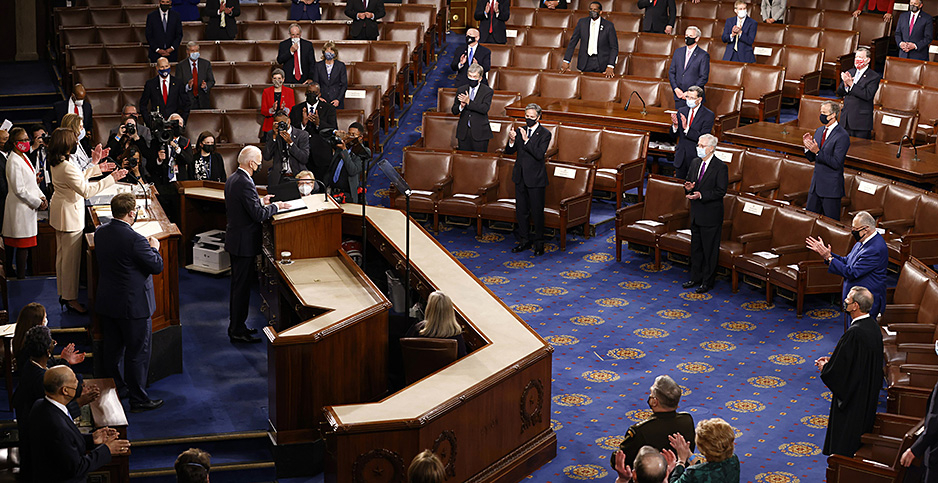 In his first joint address to Congress, Biden last night outlined a transformative vision of muscular government, with climate policy driving both domestic and international affairs. He cast decarbonization as an engine of his economic plans. And he framed competition with China as a struggle over the future of clean energy.

"We are at an inflection point in history," Biden said. "If we act to save the planet, we can create millions of jobs and economic growth and opportunity."

Those words carried extra weight because Biden is facing a choice between fighting for his climate agenda or reaching a bipartisan infrastructure agreement with Republicans, who consider his clean energy proposals a deal breaker.

Biden’s decision to emphasize climate during such a high-profile speech could make it harder for him to trade those policies away. Biden also rolled out a $1.8 trillion plan for education and family programs — ratcheting up the kind of spending proposals Republicans are already trying to strip from his infrastructure package.

Even as the two political parties seemed to move apart, Biden called for bipartisanship. He reiterated his opposition to increasing the deficit for infrastructure. And he nodded to the Republican senators who countered his $2.2 trillion infrastructure plan with a $570 billion proposal that doesn’t include investments in clean energy and climate mitigation.

"I applaud a group of Republican senators who just put forward their own proposal. So let’s get to work," Biden said, adding that he wanted to present lawmakers with his plans and hear their feedback before starting negotiations.

"But the rest of the world is not waiting for us," Biden said. "I just want to be clear. From my perspective, doing nothing is not an option."

The unity in Biden’s rhetoric belied the potential threat his plan poses to the Republican coalition. Business groups have already distanced themselves from the GOP’s hostility to climate policy, instead opting for a middle ground with market-based policies.

In his speech, Biden tried to assure a pillar of the Republican Party — blue-collar, white men — that his energy policies would not leave them behind.

He uttered the word "job" 43 times. And he addressed the social tensions that have turned climate politics into a culture war, promising to help workers who have been squeezed by market-driven decarbonization.

"I know some of you at home are wondering whether some of these jobs are for you," Biden said. "So many of you, the folks I grew up with, feel left behind, forgotten in an economy that’s so rapidly changing. It’s frightening. Let me speak directly to you."

He cited economic analyses that predict his plan would spur massive job growth over eight years, naming engineers, farmers and lineworkers as the beneficiaries.

"These are good-paying jobs that can’t be outsourced," he said. "Nearly 90% of the infrastructure jobs created in the American Jobs Plan do not require a college degree, 75% don’t require an associate’s degree.

"The American Jobs Plan is a blue-collar blueprint to build America," the president said.

Biden never uttered his predecessor’s name, but former President Trump loomed over his speech — both for what he’d done and what he symbolizes.

Trump was the only world leader to quit the Paris climate agreement, making the U.S. something of a rogue state on climate even before Trump started curtailing environmental regulations. Biden rejoined the Paris Agreement and held a climate summit last week where he increased the United States’ climate goals.

But he said other countries still doubt U.S. commitment.

"The comments I hear most of all," Biden said, "is they say ‘We see America is back, but for how long?’"

Trump has floated the possibility of running again for the White House, and the former president continues to exert an isolationist and anti-environmental influence on the party.

Even now, Trump’s legacy is one of the obstacles to a bipartisan infrastructure deal. Biden wants to pay for his package by undoing some of Trump’s corporate tax cuts. That’s out of the question for Republicans, who see that as their signature accomplishment under the last administration.

Speaking about immigration, Biden acknowledged that last year’s record hurricanes were among the reasons people were fleeing Central America. He pointed to extreme weather causing electrical grid failures, like the historic winter storm that plunged Texas into deadly blackouts in February.

And on the international stage, he said, the energy transition and climate diplomacy are becoming integral to U.S. leadership.

"The climate crisis isn’t our fight alone; it’s a global fight," Biden said, adding that the U.S. accounts for 15% of emissions worldwide. "That’s why I kept my promise to rejoin the Paris accord, because if we do everything perfectly it’s not going to ultimately matter."

Biden also framed climate change as a moral call to action — and a chance for the U.S. to maintain economic dominance.

"We can own the electric car market," he said. "There is simply no reason why the blades for wind turbines can’t be built in Pittsburgh instead of Beijing. No reason."

In a way, climate is what unified Biden’s domestic, international and political visions. His decarbonization plan calls for muscular government action that the U.S. hasn’t seen in decades — and that action, in turn, could reshape the public’s attitudes around the role of government.

"We’re creating hundreds of thousands of new jobs," he said. "We’re delivering real results to people. They can see it and feel it in their own lives, opening doors of opportunity, guaranteeing some more fairness and justice. That’s the essence of America."