Biden disrupts detractors with war on warming, not on coal 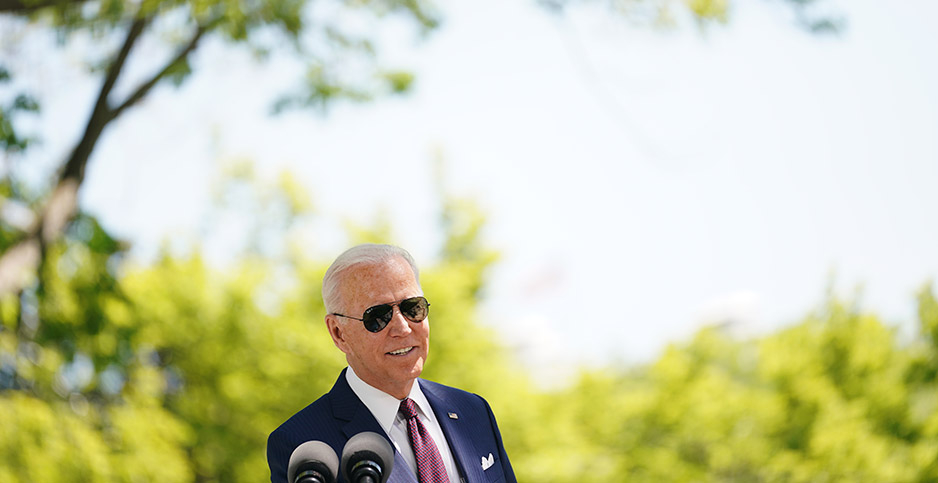 President Biden speaks to the press yesterday on the North Lawn of the White House. Biden has focused on multiple priorities in addition to climate change during his first 100 days in office. Stefani Reynolds/Pool via CNP/SplashNews/Newscom

Joe Biden won the presidency with a call to treat climate change as "the existential challenge that’s going to determine our future."

"The cry for survival comes from the planet itself," President Biden said in his inaugural speech, "a cry that can’t be any more desperate or any more clear."

Now, nearing the hundredth day of his presidency, Biden has recast climate change as just one of several challenges. Depending on the day or the audience, global warming can be an "existential threat" — or up for negotiation.

The White House’s on-again, off-again emphasis on climate policy is one reason Biden’s early tenure has defied easy narratives. The president has set new, ambitious goals like cutting greenhouse gas emissions in half by 2030. He’s also backed off some of his more aggressive promises, and some progressives worry that climate could get left behind in his quest for a bipartisan infrastructure bill.

"The president’s only red line [on infrastructure] is inaction," White House press secretary Jen Psaki said last week at the close of a virtual climate summit attended by three dozen world leaders. Biden wants his plan to pass, she said, but his new climate pledge doesn’t depend on it: "We have several paths toward achieving that objective and that goal."

Now, with his climate summit behind him and a ferocious legislative battle ahead, Biden confronts a historic juncture that could determine whether the world’s largest all-time emitter can lead the energy transition. If he fails, the United States might not have another chance to change trajectory before humans lock in catastrophic changes in temperature and sea-level rise.

Democrats have failed before, first with the 2009 Waxman-Markey carbon cap-and-trade bill that died in the Senate and later through EPA’s Clean Power Plan regulations that never went into effect. So now Democrats are trying something different.

Although he has tried to avoid the Green New Deal label, Biden based his climate plan on a similar theory of politics. The old model of climate policy, which looked for ways to restrict fossil fuels through regulating and the market, imposed too many costs on too many groups. Instead, the government could essentially throw money at the problem. Massive federal investments could both accelerate decarbonization and cushion the transition.

Julian Brave NoiseCat, vice president of policy and strategy at Data for Progress, a progressive public policy group, said the administration is emphasizing the investments and incentives that can boost clean energy. "Biden and his team seem to have the view that carrots buy sticks," he said.

"The main subtractive politics that they’re interested in, like the clean electricity standard, are going to ride along with that. But [those policies] also depend on the broader investments and incentives package being successful," NoiseCat said.

The promised benefits of Biden’s plan have equipped Democrats to answer criticism from almost every angle. Even the American Petroleum Institute has praised portions of the plan, like boosting hydrogen power and carbon capture — two lifelines for the fossil fuel industry.

"We are asking people to actually look at the technologies of today," she said. "We’ll advance them. We’ll deploy them. We’ll start getting them cheaper by investing in manufacturing and getting those jobs back here in the United States."

Biden, though, still has to deliver those investments. Without them, his climate agenda more closely resembles the old model of regulating coal, oil and gas out of existence — a political hazard the administration faced in its opening days.

He rejoined the Paris climate accord, which brought the United States back into the global climate fight after former President Trump abandoned years of climate diplomacy and exited the world stage.

The move did little on its own, but it was the first step to ratcheting up U.S. commitments, eventually leading to Biden’s new goal of cutting greenhouse gas emissions in half by 2030.

He also blocked the Keystone XL pipeline project. Over the past three administrations, the proposed pipeline from Canada’s oil sands has morphed into an icon of the future of energy. The move signaled Biden’s commitment to the environmental left, but it attracted blowback from Biden’s other key ally: organized labor.

About 1,000 union workers were laid off from the job. Labor leaders blasted the administration’s decision. Republicans hoped it was the beginning of a schism between Biden and working-class voters.

"For union members affected by this decision, there are no renewable energy jobs that come even close to replacing the wages and benefits the Keystone XL project would have provided," said Terry O’Sullivan, president of the Laborers’ International Union of North America (LIUNA).

"Hopefully, the Biden administration will not continue to allow environmental extremists to control our country’s energy agenda," O’Sullivan said at the time.

Progressives have never held so much sway over a national climate strategy being forged out of the West Wing. Early on, the White House stacked the administration with people from the climate movement — activists, policy experts, bureaucratic infighters and scientists and economists who have specialized in emissions.

Many of them subscribed to the new theory of climate politics. They knew they had to demonstrate the benefits of their agenda.

So even as Biden put restrictions on fossil fuels such as pausing new leases on public lands, the administration redoubled its outreach to labor. In public, the Biden team focused on passing his COVID-19 pandemic relief bill. But privately, the president was also preparing to deliver on some of labor’s top priorities. Those included supporting new protections around union organizing and an infrastructure build-out. Those steps could swell union ranks.

Biden released a video endorsing an Amazon.com union drive. It was the boldest demonstration of pro-labor politics by a president in recent years. And he invited union leaders to the White House, where he assured them he would defend natural gas, a major source of union employment, and solicited their infrastructure priorities.

The union schism that Republicans had egged on didn’t materialize. Instead, Biden’s new model of climate politics seemed to bind the Democratic coalition tighter.

Biden’s emphasis on creating union jobs is "a refreshing change," O’Sullivan said after union leaders huddled with Biden in the Oval Office.

LIUNA represents workers on pipelines and other fossil fuel infrastructure construction. The renewables sector has been hostile to unionization, leading to lower wages and flimsier protections. Biden’s climate and infrastructure plan aims to reverse that trend and sweep unions into clean energy. That, O’Sullivan said, could be "transformational."

"LIUNA is honored to work with this White House on what is arguably one of the most ambitious jobs plans in our nation’s history," he said in a statement to E&E News. "We are determined to see [it] through to the finish line with this Congress."

Unions have served as a leading indicator of the resilience of Biden’s climate agenda.

Republicans have struggled to redefine Biden beyond his moderate "Uncle Joe" image. Even as the president charts the most expansive climate program in U.S. history, Republicans have instead focused their attacks on immigration, taxes and "cancel culture."

If anything, Biden has refashioned climate into a wedge issue between conservative lawmakers and business groups, dividing his opposition and rendering their criticisms more diffuse. That’s far different from their unified opposition to virtually every aspect of former President Obama’s climate agenda.

Republican lawmakers have attacked the full breadth of Biden’s proposal, from its corporate tax increases to its electric vehicle subsidies. They pointed to electric vehicles subsidies as an example of Democrats torturing the definition of infrastructure. And invoking China, they’ve questioned the need to decarbonize at all.

"Your background raises, I think, reasonable concerns about why you have in the past and some cases now seem to be echoing the Chinese Communist Party line on the climate crisis — that the West and only the West needs to rapidly decarbonize based on doomsday projections," Perry said at Buttigieg’s first House hearing.

Republicans have also reprised the lifestyle attacks that characterized their response to the Green New Deal. In the wake of Biden’s climate summit, conservative media was churning over false reports that the White House was moving to limit people to 4 pounds of meat a year.

Not gonna happen in Texas! pic.twitter.com/zqYS9kH8CU

That has left the true substance of Biden’s climate plan out of sight for many independent and conservative-leaning voters.

Business groups, meanwhile, have offered ambivalent praise for Biden’s climate moves. Facing the combined pressures of consumer sentiment, climate impacts on operations and the threat of heavier regulations, businesses have spent the early days of the Biden administration trying to reshape decarbonization on their terms.

That’s been little help to Republicans, because many businesses’ preferred solution — a carbon price — is a non-starter among GOP lawmakers.

Although the U.S. Chamber of Commerce has aggressively pushed back on Biden’s corporate tax plan, it said the president was right to focus on a "big and bold program to modernize our nation’s crumbling infrastructure."

Likewise, API has supported Biden’s reentry into the Paris Agreement. The trade group gave a muted reaction to Biden’s new decarbonization goals, and instead emphasized its support for carbon pricing.

Some progressives fear that climate policy’s popularity might inadvertently undercut it.

Biden and key Democrats, like West Virginia Sen. Joe Manchin, have pushed the White House to look for ways to win over Republicans when its infrastructure plan goes to Capitol Hill. One possibility under consideration would be to split off the noncontroversial infrastructure, like roads and bridges, into one package while saving climate and other Democratic priorities for a second round.

If Republicans’ midterm performance rests on Biden’s record, and if economic stimulus and climate policy boost his popularity, then Republicans have every incentive to strip out those measures, NoiseCat said.

Biden has already strayed somewhat from his initial climate agenda.

After campaigning on a climate plan to spend $2 trillion over four years, the White House now proposes a timeline of at least eight years and diverting about half the money to other issues, like caregivers and broadband.

Biden also walked back his pledge, reiterated during the autumn presidential debates, of "no fracking and/or oil [drilling] on federal land." The administration has paused new oil and gas leasing pending a review, but officials say that is only temporary. Meanwhile, the Interior Department is still issuing new drilling permits for existing leases.

Those moves reflect the push and pull of the Democratic coalition. Those same internal dynamics are already shaping the congressional process on infrastructure.

For instance, the Problem Solvers Caucus, a bipartisan coalition in the House, released an infrastructure framework last week that included none of Biden’s climate priorities.

After getting left behind on the pandemic bill, Republicans looking to make a deal with Biden have been wary that he might be using them for bipartisan photo-ops without budging on policy. But as the weeks go on, some progressives have started to worry about what Biden might be willing to trade away.

The answer could decide Biden’s legacy and the future of U.S. decarbonization.

"No more empty promises. Legislate like our lives depend on it," said Zina Precht-Rodriguez, the communications director for the Sunrise Movement.