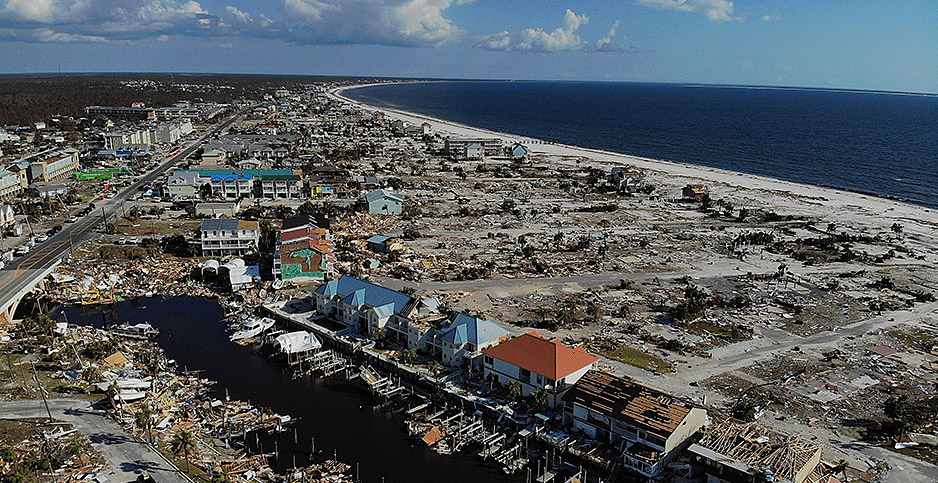 President Biden’s decision yesterday to double the amount of climate-mitigation money the federal government gives states and communities drew praise from advocates but also warnings that the extra $500 million is not enough.

Biden announced that the Federal Emergency Management Agency would distribute $1 billion next year through a grant program that helps state and local governments pay for projects to reduce their vulnerability to disasters such as floodwaters, tornados and wildfires.

Although the $1 billion marks a sharp increase in FEMA spending on disaster mitigation, it still falls well short of the demand for the agency’s new program, called Building Resilient Infrastructure and Communities, or BRIC.

FEMA received 991 applications earlier this year from states, counties, municipalities and tribes seeking a combined total of $3.6 billion from BRIC. Applicants came from every state except Mississippi as well as three U.S. territories, 73 tribes and the District of Columbia.

"Clearly the demand outstrips the amount of funding so any movement to increase the funding is welcome," said Sarah Murdock, director of U.S. climate resilience and water policy for the Nature Conservancy.

Thanu Yakupitiyage of the environmental group 350.org said in a statement that the increased BRIC allocation "is like trying to repair a house’s crumbling foundation with poles. We support investing in pre-disaster preparation, but it must be at the scale of the climate crisis."

The funding increase is not a complete surprise. FEMA hinted in recent months that it might increase BRIC spending above the $500 million it will allocate this year through the program.

The agency faced pressure from state and local officials, advocates and a bipartisan group of lawmakers led by House Transportation and Infrastructure Chair Peter DeFazio (D-Ore.) and the committee’s ranking Republican, Rep. Sam Graves of Missouri.

Biden announced the increase yesterday as he visited FEMA’s Washington headquarters to show support for the agency one week before the official start of the Atlantic hurricane season.

The BRIC funding "is going to help communities, including those too often overlooked," Biden said, referring to his pledge to spend a significant portion of climate resources on disadvantaged communities. "And it’s going to invest in resilience and better protect themselves to serve for other climate events that we’re going to be facing."

Under the BRIC program, FEMA will pay at least 75% of mitigation projects such as relocating or elevating flood-prone homes, fortifying utilities and infrastructure, and building hardened shelters in areas exposed to tornados or hurricanes. The money is separate from the billions of dollars FEMA gives states each year to rebuild from disasters.

Several advocates said yesterday that FEMA needs to make it easier for communities to spend the BRIC money on so-called natural infrastructure projects, such as preserving wetlands as a buffer against increasing storm surge and sea-level rise.

"There are a whole bunch of challenges to doing that under the current rules of the program," Murdock of the Nature Conservancy said.

Communities must show FEMA that the economic benefits of a proposed mitigation project would exceed its costs — a process that can be costly and time-consuming for projects that involve restoring natural systems as opposed to building structures.

"If you’re doing floodplain restoration, you have to do a hydrological analysis to show flood risk reduction for downstream property. That gets pretty expensive," Murdock said.

Marla Stelk, executive director of the Association of State Wetland Managers, said nature-based projects can provide "co-benefits" such as wildlife habitat and green spaces for communities, "particularly those that are traditionally underserved."

Created by Congress in 2018, BRIC differs from most FEMA grant programs, which rely on an annual appropriation from lawmakers. BRIC is funded automatically each year through a mechanism that sets aside a small percentage of FEMA’s disaster aid for the program.

FEMA officials had expected the funding mechanism would generate about $500 million a year for BRIC. But that changed last year after former President Trump authorized every state to use FEMA disaster funds for costs related to the coronavirus pandemic.

With FEMA allocating tens of billions of dollars of disaster aid for the pandemic, the BRIC account ballooned to $3.7 billion for the fiscal year that ended Sept. 30. FEMA decided nevertheless to limit BRIC spending to $500 million because the program is in its first year and involves new procedures and selection criteria.

FEMA has said it would announce grant recipients this summer.

Correction: An earlier version of this story said incorrectly that President Biden’s increase in BRIC funding will take effect this year. The funding increase applies to the fiscal year that begins Oct. 1.