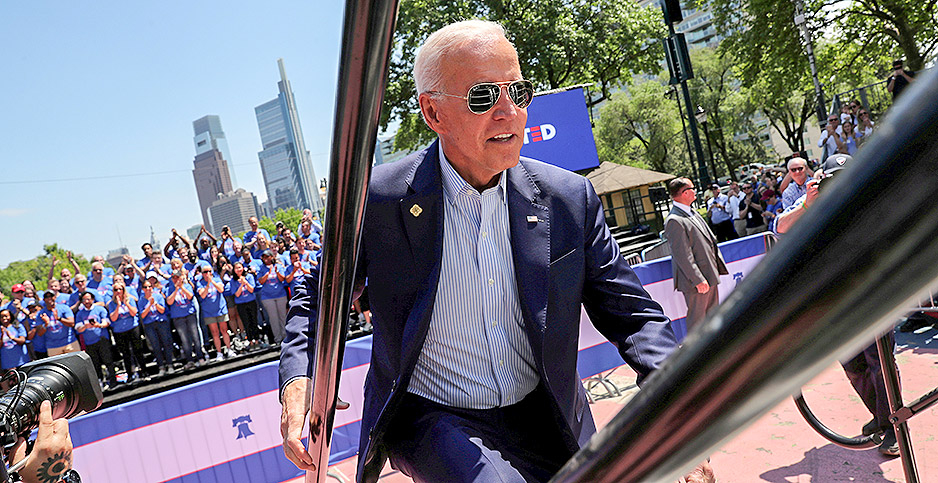 Joe Biden released a climate plan this morning that confronts the narrative around his candidacy that the former vice president is an outlying moderate in a Democratic Party that’s been electrified by its wing of progressives.

The 22-page proposal calls for a ban on new oil and gas permits on public lands. It lauds the Green New Deal as a "crucial framework for meeting the climate challenges we face." And it lays out plans for a $1.7 trillion federal investment in clean energy, infrastructure and public health.

"Science tells us that how we act or fail to act in the next 12 years will determine the very livability of our planet," Biden said in a statement.

All of this comes just weeks after a campaign adviser suggested to Reuters that Biden might take a more moderate approach to climate change. The ensuing article triggered a wave of criticism from liberal environmentalists and politicians, and it raised questions about how aggressive a posture Biden would take on climate change (Climatewire, May 13).

Today’s proposal answers some — but not all — of those questions.

Broadly, it’s clear Biden is taking cues from his primary rivals in the race for president and from the Democratic electorate. Recent polls have shown that climate change has risen in importance among Democratic voters, and many of the two dozen Democrats pursuing their party’s nomination have laid out plans in response.

Biden isn’t alone, for example, in wanting to ban new drilling on public lands. Sen. Elizabeth Warren (D-Mass.) called for something similar weeks ago. His desire to steer $1.7 trillion in federal funding toward clean energy and infrastructure bears a resemblance to a plan outlined in late April by former Rep. Beto O’Rourke (D-Texas). And his aim to get the United States to net-zero emissions by 2050 is the same timetable that Sen. Michael Bennet (D-Colo.) put forward last month.

He also vowed to refuse campaign contributions from "oil, gas and coal corporations or executives."

Then there’s the Green New Deal.

Developed by environmentalists but derided by congressional Republicans, the plan would have the United States fight climate change with a government-led jobs program. Several of Biden’s Democratic rivals, including six senators, have embraced the concept.

Biden makes only one direct reference to the Green New Deal in his 22-page proposal, but hallmarks of the proposal are scattered throughout the document.

Much of it is contained in Biden’s desire to invest heavily in U.S. infrastructure to prepare for the damaging effects of climate change. For example, his plan would use the federal procurement system, which spends about $500 billion annually, to "drive towards 100% clean energy and zero-emissions vehicles."

It also would add climate change impact to the criteria of federal permitting decisions.

"On day one, Biden will make smart infrastructure investments to rebuild the nation and to ensure that our buildings, water, transportation and energy infrastructure can withstand the impacts of climate change," wrote the authors of the plan. "Every dollar spent toward rebuilding our roads, bridges, buildings, the electric grid, and our water infrastructure will be used to prevent, reduce, and withstand a changing climate."

There’s also a nod to railroads, long a passion for Biden, a former senator from Delaware who routinely commuted home from Washington on Amtrak. The plan envisions a "second great railroad revolution" that would cut "the travel time from D.C. to New York by half."

Shadings of the Green New Deal can be seen, too, in Biden’s calls for environmental justice — a hallmark of the youth-led Sunrise Movement, which has championed the idea. For Biden, that includes stepping up the number of criminal pollution cases that EPA refers to the Justice Department.

"We cannot turn a blind eye to the way in which environmental burdens and benefits have been and will continue to be distributed unevenly along racial and socioeconomic lines — not just with respect to climate change, but also pollution of our air, water, and land," noted the report.

Biden’s climate proposal, however, isn’t just a facsimile of the Green New Deal. It also contains ideas that have found support among centrists and even conservatives — such as carbon taxes, nuclear energy and carbon capture technology.

Especially notable is Biden’s support of a tax on carbon emissions.

The policy once enjoyed broad public support on the left, but it since has faded in popularity, as evidenced by Sen. Bernie Sanders’ (I-Vt.) recent retreat on the issue. One concern from the left is that carbon taxes, by themselves, won’t do enough to stop climate change (Climatewire, June 3).

In his plan, Biden argues that "polluters must bear the full cost of the carbon pollution they are emitting." While the wording is unclear, a Biden campaign aide confirmed that the passage referred to a tax on carbon emissions.

Another pillar of Biden’s plan is the creation of a new federal research project that would focus on climate-saving technologies.

It’s here where Biden said he’s open to the idea of nuclear energy and another potential fix — known as carbon capture — that could grab carbon dioxide from facilities such as power plants before it reaches the atmosphere.

Both ideas face skepticism from the environmental community. In the case of carbon capture, it’s because of fears that it would only encourage the continued use of fossil fuels.