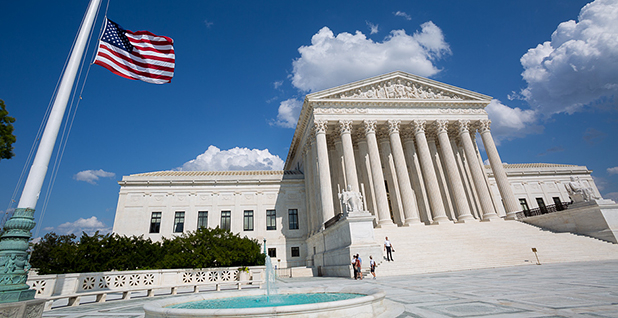 The Biden administration is backing a pipeline developer’s high court fight to use eminent domain to build a 116-mile natural gas project across state-controlled land in New Jersey.

Acting Solicitor General Elizabeth Prelogar this week reiterated arguments made by her predecessor that PennEast Pipeline Co. LLC had acted within its authority under the Natural Gas Act to take 42 parcels of land in the project’s path.

The pipeline company is seeking to overturn a 2019 3rd U.S. Circuit Court of Appeals decision that found that the use of eminent domain against the will of the state violated its constitutionally protected sovereign immunity.

Prelogar argued that the 3rd Circuit decision went against a "long unbroken history" of the government delegating eminent domain authority, dating back to the nation’s founding. In this case, the Federal Energy Regulatory Commission had properly used that authority after it granted PennEast a certificate of public convenience and necessity for its project, she said.

"[T]he NGA authorizes certificate holders to condemn State-owned property that FERC has determined is necessary for the construction of an interstate pipeline," Prelogar wrote in a friend of the court brief this week.

"The text of Section 717f(h) authorizes certificate holders to acquire all property necessary for the federally approved project, without exception for property in which a State may claim an interest," she added.

Prelogar also said that the case should have been brought instead to the U.S. Court of Appeals for the District of Columbia Circuit. States, just like other landowners, have an opportunity to raise concerns about the siting of the project before FERC as part of the certification process, she said.

"A certificate of public convenience and necessity issued by FERC is reviewable only on direct review in a court of appeals," she added.

The Biden team’s support for PennEast came after legal experts had predicted the new administration was likely to stand behind the executive authority over states under the Natural Gas Act (Energywire, Feb. 4).

Another company to face a sovereign immunity challenge to its natural gas project in recent years was also quick to join the Biden administration to call for the Supreme Court to take action on the PennEast case.

"The Court should put a stop to state obstructionism by making clear the Natural Gas Act delegates all the United States’ eminent-domain powers to pipeline companies, including the United States’ power to condemn state owned land," Columbia Gas Transmission LLC wrote in its Supreme Court brief.

The U.S. District Court for the District of Maryland had blocked its Eastern Panhandle Expansion Project on very similar grounds to the PennEast challenge. An appeal of the ruling has been stalled in the 4th U.S. Circuit Court of Appeals.

Trade associations representing the natural gas industry and manufacturers also voiced support for overturning the 3rd Circuit ruling, which they said would give states veto power over projects and overturned almost 80 years of interpretation of the Natural Gas Act.

"[F]or the next decade and beyond, domestic natural gas supplies are expected to be sufficient to meet growth in demand across all sectors," the industry groups wrote in their Supreme Court brief.

"But, if the natural gas industry were to become wracked by upheaval and uncertainty, the gap between supply and demand would be virtually guaranteed to grow."

A lack of sufficient pipelines will in turn hurt upstream exploration production, with impacts cascading through Pennsylvania’s economy from the loss of stable jobs and fossil fuel royalties, said industry and worker groups.

In PennEast’s case, almost all of the parcels had conservation, recreation or agricultural easements.

Since states claimed "vast and varied interests" in real estate, they could make it "virtually impossible" to find a route for an interstate pipeline if they wanted to block eminent domain, the Marcellus Shale Coalition and Pennsylvania Independent Oil & Gas Association added in their brief.

Allowing the 3rd Circuit ruling to stand would put new barriers on a well-established eminent domain practice, wrote the U.S. Chamber of Commerce and the Pennsylvania Chamber of Business and Industry.

"This Court’s acceptance of that proposition would severely hamper Congress’s ability to spur the development of infrastructure needed to sustain and promote economic growth," the groups wrote in their brief.