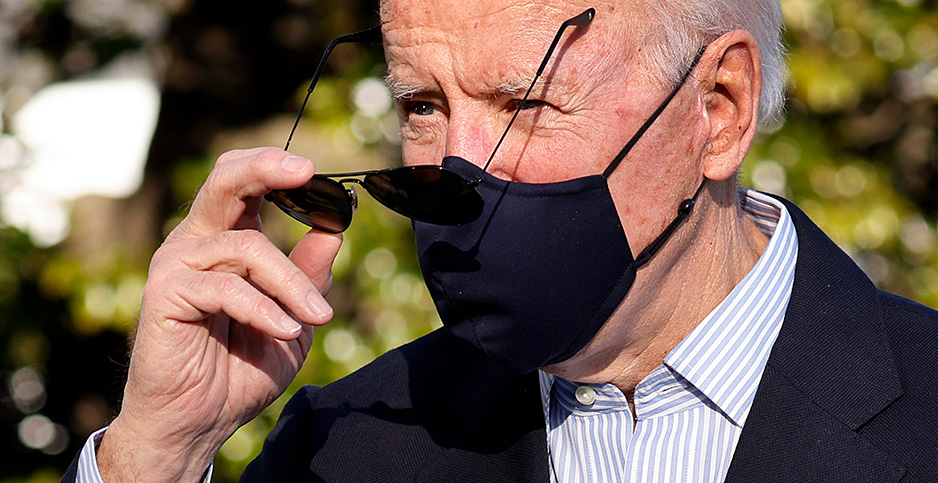 President Biden and his advisers are racing to develop aggressive climate goals ahead of his global summit next month. CNP / Polaris/Newscom

The Biden administration is facing pressure to announce a climate goal next month to slash U.S. carbon emissions in half by 2030.

The aggressive commitment would propel the United States into a global leadership role on climate change and trigger seismic shifts away from the use of fossil fuels in energy generation and transportation.

Anything short of that goal threatens to undermine President Biden’s promise to prevent temperatures from rising more than 1.5 degrees Celsius, while likely instigating a political rebellion among foreign allies and domestic supporters.

The move could come within 30 days. The White House climate team led by Gina McCarthy is racing to develop U.S. climate commitments for 2030 before Biden convenes a virtual global climate summit on Earth Day, April 22. Those goals, known as a nationally determined contribution, are the cornerstone of the United States’ commitment to the Paris Agreement.

John Kerry, the president’s top climate diplomat, signed a joint statement with the United Kingdom earlier this month urging countries to "take the steps needed to keep a 1.5C temperature limit within reach, including through ambitious and long-term strategies to cut emissions and reach net zero."

Only a 50% reduction in greenhouse gas emissions by 2030 would put the United States on a glide path to get there.

"It’s a little hard to imagine that the U.S. would push other countries to commit to 50% without making that level of commitment itself," said Robbie Orvis, director of energy policy design at Energy Innovation: Policy and Technology LLC, a consulting group with connections to the White House.

Falling short of 50% would also frustrate U.S. green groups and environmental think tanks that spent the Trump years churning out analyses on policy options — including federal regulation and procurement as well as legislation and state action.

There are at least 10 such analyses that have been made public or are due to be released in the next few weeks by groups like America Is All In, Energy Innovation and the Environmental Defense Fund. All of them focus on the same goal — a 50% emissions cut by 2030.

"They’re showing different pathways to roughly similar numbers," said Nathan Hultman of the University of Maryland, a White House official under President Obama who wrote two of the analyses.

"We’re all pushing for high ambition," said Rachel Cleetus, international climate director for the Union of Concerned Scientists. "We think at least 50% below 2005 is possible, and that’s the kind of number the world’s going to be looking for after these five years of rolling back action, stepping away from the Paris Agreement."

But while expert opinion coalesces around a 50% carbon reduction, there are questions about how close the Biden team will come to matching that target — and when it will be released.

Sources briefed by the White House say the Biden team might only float top-line figures for its 2030 commitment, leaving the details for later about how the United States will achieve those reductions.

She and her team could offer some details behind the target — perhaps by announcing new policies or agreements with some of the industry groups McCarthy has met with in recent weeks. They have ranged from car manufacturers to aviation to the oil industry (Climatewire, March 23).

The administration might also point to the extensive analyses by outside experts to support a hypothetical 50% target even if the White House doesn’t provide a road map of its own for how it will deliver the commitment.

Hultman, the former White House adviser who helped devise Obama’s climate goal in 2015, said outside climate analyses should give the administration confidence that a 50% reduction can be achieved, even if some policy levers — like a carbon tax — remain out of reach.

The interagency climate task force McCarthy oversees met virtually for the second time last week, with Kerry in attendance. The Earth Day summit was on the agenda, the White House said, as were "opportunities for each agency to reduce emissions while supporting good-paying, union jobs, improve health in our communities, and ensure America leads the industries that will power the future."

It’s unclear how far in advance of the summit the White House might release its 2030 climate commitment. Biden has long billed the gathering as a way to leverage U.S. commitments to increase the ambition of other nations before a U.N. climate summit in Glasgow, Scotland, in November.

Publicizing the U.S. commitment early might push other countries to release their own goals, some observers said. But others said the White House might wait to unveil its carbon commitment immediately prior to the April summit with other countries — a format that the Obama administration used in 2014 when it released its Paris goals with China.

Alden Meyer, a senior associate with the think tank E3G, said that Kerry and his team are working with about 10 or 12 countries to try to get 2030 climate agreements, 2050 decarbonization commitments or other deliverables ready for the summit.

There have been news reports that India might announce plans to zero out its emissions by 2050 — a decade earlier than China pledged to do last year. The Biden administration is expected to formally commit to U.S. carbon neutrality by 2050 by the summit.

The 2030 and midcentury strategies aren’t the only thing McCarthy and Kerry are readying for April 22, according to sources.

While the greenhouse gas abatement pledges are an important signal to other major emitters, vulnerable countries also want to know how the United States plans to revive the climate finance pledges it abandoned.

"Developing countries are looking for a signal that the U.S. understands its obligations and needs to recommit to Paris on all fronts, and that includes finance as well as an ambitious NDC," said Joe Thwaites, who works on sustainable finance at the World Resources Institute, referring to the nationally determined contribution.

The United States has yet to deliver $2 billion in Obama-era pledges to the United Nations’ Green Climate Fund, even as some other major contributors doubled their commitments to the next funding cycle two years ago. WRI has recommended that the White House commit to provide $8 billion to the fund over the next four years.

Thwaites said other developed countries would also be looking to the United States to make good on past promises.

"Many of them feel like they spent the last few years carrying a lot of the climate finance effort without the U.S. doing its fair share," he said.

Kerry has spoken repeatedly about the need to deliver the $2 billion that President Trump refused to give to the Green Climate Fund, and there’s little doubt that the administration’s "skinny budget" for fiscal 2022 will propose at least some funding to make up the shortfall.

A long-term plan for climate finance is likely to appear in the "climate finance plan" that Biden tasked the State and Treasury departments with writing.

Biden’s climate executive order in January set a deadline of April 27 for State and Treasury to complete their work, but it’s likely to come out before the Earth Day summit.

"I would be astronomically surprised if they do not announce it by April 22 because there’s going to be a session on April 22 on finance, and the U.S. can’t host a session and say, ‘Sorry, we don’t have our plan done,’" said Jake Schmidt, international climate director for the Natural Resources Defense Council.

The plan may include commitments from the private sector. Kerry and Wall Street veteran Mark Gallogly, a Kerry adviser, have been pressing Wall Street firms to adopt 2030 commitments in advance of the summit.

Steven Rothstein, founding managing director of the Ceres Accelerator for Sustainable Capital Markets, said he hopes an effort to align the way firms disclose their climate risks will be part of the administration’s plans.

Uniform disclosure practices would "be more consistent for the marketplace and ultimately would save money because we could identify issues sooner," he said.

The finance plan will also include new commitments from a full range of internationally focused government agencies, offices and finance institutions.

The U.S. International Development Finance Corp., for example, is looking into ways to free up more lending for climate projects.

"If they’re going to have the so-called whole-of-government approach that was called for and that they’re promising, it should not be sort of narrowly defined to what [U.S. Agency for International Development] and the State Department can do," said Schmidt of NRDC.

Multilateral development banks are also expected to release new commitments before the summit for how to increase lending that goes to low-carbon projects or reduce their support for fossil fuels.