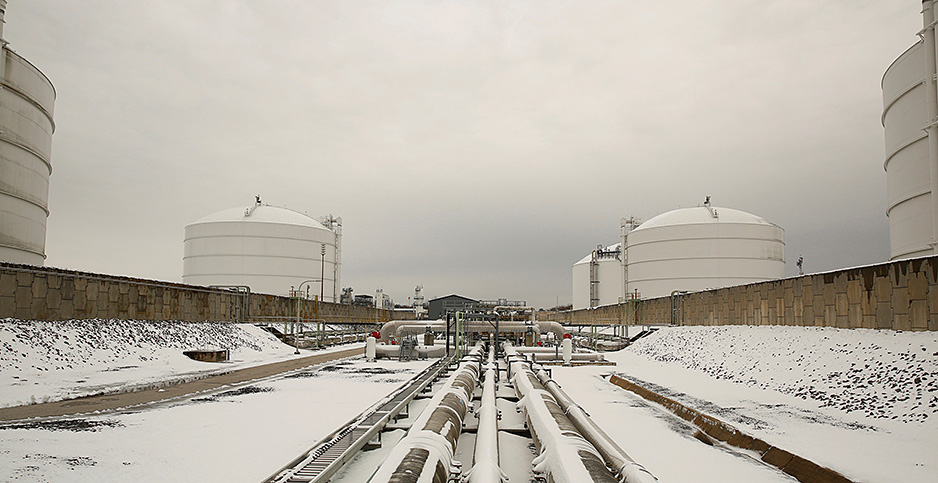 Dominion Energy's Cove Point liquefied natural gas terminal along the Chesapeake Bay in Maryland is pictured in this 2014 file photo. The U.S. Energy Information Administration says it expects U.S. LNG exports to "more than double" between 2020 and 2029. Gary Cameron/Reuters/Newscom

The Biden administration has yet to fully delineate its position on liquefied natural gas, prompting cautious optimism from industry but spurring pushback from groups that want to phase out the fuel.

LNG shipments are often bound for "countries that would otherwise be using very carbon-intensive fuels," Granholm said, adding that "it does have the impact of reducing internationally carbon emissions."

"However, I will say there is an opportunity here, as well, to really start to deploy some [carbon capture, use and storage] technologies with respect to natural gas in the Gulf [of Mexico] and other places that we are siting these facilities for that we are obligated to do under the law," Granholm said.

The comments highlight a dilemma the Biden administration is facing on LNG: How will the fuel coexist with aggressive climate targets without infuriating a core of the Democratic base? President Biden has vowed to tackle climate change by transitioning to a net-zero-emissions economy by 2050.

It’s currently unclear how Biden might differ on the issue from the previous two administrations. President Obama got many LNG export projects off the ground, and both Trump administration Energy secretaries were enthusiastic supporters. Former Energy Secretary Rick Perry’s DOE dubbed it "freedom gas" at one point, boasting that it provided U.S. allies with a cleaner source of energy.

Biden officials have, however, made comments that mirror those from industry and some analysts about the role LNG exports can play in offsetting the continued growth of coal, particularly in China and Southeast Asia.

"We’re a democracy; we’re the leader of the free world. I think it’s a much better outcome for Japan or others to get their energy supplies from the U.S. than to get it from Russia or other countries," Turk said amid Republican questioning at his confirmation hearing before the Senate Energy and Natural Resources Committee.

Still, Turk said, the United States needs to do a "better job" of capping methane emissions of natural gas, a chief criticism of LNG opponents. In a December report, for instance, the Natural Resources Defense Council said increased LNG exports are in conflict with efforts to contain global temperature rise to 1.5 degrees Celsius (Energywire, Dec. 8, 2020).

Under questioning from Sens. John Barrasso (R-Wyo.) and Mike Lee (R-Utah), who asked about the potential of sending LNG to coal-burning countries, Turk declined to detail how the department would determine whether new LNG projects would be approved, saying that it would follow the law.

While the Federal Energy Regulatory Commission oversees siting and permitting of LNG export terminals, DOE under the Natural Gas Act is tasked with determining whether exports to countries that do not have free-trade agreements with the United States are in the public interest.

"I certainly wouldn’t want to prejudge any particular circumstances coming before the department," Turk said.

He did say one factor would be the energy source that LNG would replace, adding that if it were going to a country using coal, "then you would have net positive in terms of the climate benefit."

Environmentalists, meanwhile, pointed to White House climate envoy John Kerry’s comments last week at the CERAWeek by IHS Markit energy conference as evidence that the Biden administration’s stance on LNG is still up for debate. Kerry warned energy companies that they risk losing assets if they don’t adapt faster.

However, Charlie Riedl, executive director of the Center for LNG, said that Kerry’s remarks about stranded assets didn’t mention LNG by name and that the group — a committee of the Natural Gas Supply Association — would work with the Biden administration "on continuing to unlock the benefits of increased global LNG use in place of dirtier fuels."

"The LNG industry continues to work with the natural gas industry as a whole to produce the cleanest energy possible to help create a clean energy future," Riedl said in a statement. The center in January released a set of principles to address methane emissions.

U.S. LNG exports are expected to more than double between 2020 and 2029, according to projections in the U.S. Energy Information Administration’s most recent annual energy outlook. Exports could increase even more with "higher oil prices or lower U.S. natural gas domestic prices," the report said.

As of September 2020, there are seven LNG export terminals in the United States, according to FERC, and nearly two dozen that are approved.

At least six other projects also have been proposed or are in pre-filing, a process that occurs before the project goes to FERC for approval, according to the latest list on the agency’s website.

The Biden administration is wading into the issue as recent events underscore how different the political and industry dynamic is from when Obama took office more than a decade ago.

In November, a French company pulled out of a $7 billion deal in November to import U.S. LNG due to reported concerns over methane emissions (Energywire, Nov. 4, 2020).

The withdrawal by Engie SA was sharply criticized by the Trump administration’s Energy Department and raised questions about whether stronger regulations could allay concerns over the emissions footprint of U.S. natural gas.

Last month, Houston-based Cheniere Energy Inc. announced it will provide emissions data for the LNG cargoes it produces in a bid to improve the company’s environmental performance.

Christopher Smith, Cheniere’s senior vice president of policy, government and public affairs, said the announcement is about the company "trying to skate to where the puck is going."

"Transparency is about getting information out, and we’re trying to take steps not only to be more transparent, but also to work with our suppliers to make some of these measures even better and more positive," said Smith, speaking at a virtual discussion last month hosted by the Payne Institute for Public Policy at the Colorado School of Mines.

While he did not comment directly on Engie’s withdrawal when asked, Smith said trends reflect "a desire for transparency and good data," noting that the company did not support the rollback of Obama-era methane regulations under the Trump administration.

Clark Williams-Derry, an energy finance analyst at the Institute for Energy Economics and Financial Analysis, said that for U.S. firms looking to export LNG to Europe in particular, "emissions are going to become an increasingly potent political issue."

While Williams-Derry said he did not know whether other U.S. LNG exporters would follow Cheniere’s lead, he said the sector’s "major image problem" is grounded in reality because of the level of flaring and venting happening in places like the Permian Basin.

Williams-Derry said tackling U.S. emissions will likely require a combination of state and federal regulations and the construction of more pipelines to move gas to market that otherwise might have been flared or vented.

Steven Miles, a nonresident fellow at Rice University’s Center for Energy Studies, said the Biden administration needs to spell out its position in more detail, warning that not doing so could jeopardize the United States’ competitive edge.

"Addressing methane emissions and flaring would help set the tone that the U.S. is here to play," said Miles, adding that those steps would give greater confidence to overseas buyers looking to negotiate and finalize agreements with U.S. producers.

In a policy brief last month, Miles outlined several actions the Biden administration could take to make U.S. LNG cleaner, including the adoption of "EPA methane emissions rules that reflect our climate obligations."

Making LNG exports cleaner isn’t enough for some opponents, who argue that the United States should be more focused on reducing fossil fuels overall in the energy system.

"While they will not disappear overnight, and it would certainly help to reduce methane emissions and other impacts of oil and gas, cleaner fossil fuels cannot substitute for aggressive actions to reduce all fossil fuel activity as soon as possible," said Lorne Stockman, a senior research analyst with Oil Change International, in an email.

Melinda Pierce, the Sierra Club’s legislative director, added last week after Granholm’s confirmation: "The Department of Energy can and must focus on growing clean energy, not locking the country into decades of fossil fuel development by supporting infrastructure such as LNG terminals."

Yet the American Petroleum Institute, which represents more than 600 members, seized on comments last week from Granholm at an appearance at CERAWeek.

Alex Munton, a Wood Mackenzie principal analyst for LNG in the Americas, said "there is no realistic sense" that the administration would raise environmental objections to scrap already approved projects, which are on pace to make the United States the No. 1 exporter of LNG worldwide within the next few years.

Still, he noted that Richard Glick, who recently became FERC chairman under Biden, has dissented in the past on a number of LNG projects.

Glick has repeatedly issued extensive dissents and opposed LNG projects and pipelines, emphasizing FERC’s reversal in May 2017 of a practice in which the commission accounted for greenhouse gas impacts (Energywire, July 19, 2019). In 2019, for example, Glick dissented on FERC’s approval of the Gulf LNG Liquefaction project, saying the commission’s order approving the project violated both the Natural Gas Act and the National Environmental Policy Act.

Munton said Wood Mackenzie is bullish about LNG demand in the long term and noted that "there will need to be future supply to ensure demand is met."

"We think the market will continue to grow, that LNG will continue to increase in demand in major economies and markets," Munton said, citing increasing demand in China, India and other parts of Asia. "The big question is where the LNG is, where’s the LNG going to come from? This is all future demand growth."

At CERAWeek, some executives also contrasted LNG’s climate impacts with those of coal.

Michael Sabel, the founder and CEO of Venture Global LNG, said inexpensive LNG exports are probably in a position to have the biggest impact on emissions "by reducing adoption of new or development of new coal plants and encouraging conversion from coal to gas."

China "is continuing to … develop new coal plants, and so the cheaper we can make the gas, the more we can encourage China and other countries to not choose coal," he added.