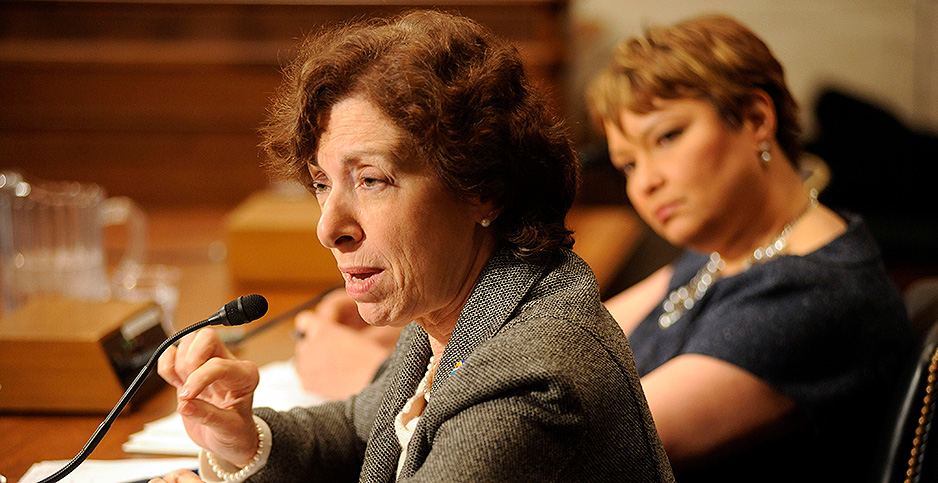 Linda Birnbaum (left) left her job leading the National Institute of Environmental Health Sciences during the Trump administration. The Biden administration faces the challenge of refilling the ranks of scientists, like her, who left the federal government during the Trump era. Birnbaum is pictured in this 2011 file photo next to then-EPA Administrator Lisa Jackson (right) at a Senate Environment and Public Works Committee hearing. Louie Palu/ZUMAPRESS/Newscom

Linda Birnbaum would have continued to direct the National Institute of Environmental Health Sciences, but she says she was "tired of being so tightly controlled."

"It became difficult for scientists to do the work," the former government microbiologist and toxicologist said in a recent interview.

Birnbaum — who left the NIH center in 2019 after about 40 years in the federal government — was one of more than 1,000 scientists who retired or quit from a science-based federal agency during the Trump administration, according to public records obtained by the Union of Concerned Scientists, which were reported earlier by the Associated Press.

While a decline in scientific experts was part of a downward trend that has been happening for nearly two decades as federal workers near retirement age, critics say, President Trump made the situation worse.

"I knew quite a number of people who retired right at the beginning of [the Trump] administration and got very involved in NGOs or consulting," Birnbaum said. "I think it’s not only the people who left — it’s the morale of where people are."

The Union of Concerned Scientists says the Trump attack on evidence-based policies and climate research propelled experts to leave. And now it’s just one of a long list of challenges Biden faces.

"Right now, it’s a foxhole mentality," said Dan Costa, an EPA scientist who retired as director of climate and air in the research office. "It’s going to take a while to rebuild that security."

Taryn MacKinney, an investigative researcher at UCS, explained the group filed public records requests across the agencies and is in the process of analyzing the data.

The group defined "scientist" as any position that involves some level of scientific training or expertise, including research, operations, modeling, inspection and oversight, and science policy.

The data isn’t perfect, MacKinney noted. It doesn’t tell the story of who is coming and going for what reason. And it doesn’t capture the loss in institutional knowledge, she said.

An EPA spokesperson said its Office of Research and Development, or ORD, underwent a reorganization a year and a half ago that reduced management overhead and put more full-time employees toward conducting science.

"As a result, ORD remained successful in meeting its research commitments. In the last year, ORD was able to hire 200 individuals, 76% of which were in science or science support positions," the spokesperson said.

While EPA saw increases in some job areas, MacKinney said, there were significant losses in far more.

"I think a lot of people sort of cashed in," Costa said. "I thought I could be more effective on the outside and keep the issues alive."

That’s been true for Marcy Rockman, a climate change coordinator for cultural resources at the National Park Service. In an interview, she explained there were deliberate efforts to dismantle her position, even as she fought for it.

"There was no value placed on my position," she said. "I was the only person championing cultural heritage and climate change. I was the lead person fighting for this."

She also stressed the loss of institutional expertise. "When you do have some of the expertise walk out the door, it’s hard to get that back," she said.

Matt Herrick, a USDA spokesperson, said in a statement the agency "lost too many of the nation’s best economists and agricultural scientists over the past few years." He said it would take time to fill open positions and build a scientific and research workforce.

The trend was not consistent across the federal government. The National Science Foundation, for example, gained 79 scientists. And NASA grew by 91.

That jibes with what watchdogs like MacKinney have heard anecdotally. The Trump EPA’s attack on science was much clearer, she said. The same was not necessarily true at NSF, where there are fewer political appointees and the director serves a six-year term.

Similarly, Birnbaum noted that National Institutes of Health Director Francis Collins continues to successfully secure more funding for the institute. "NIH there is this kind of a protected thing," she said. "If you go to a number of other agencies, their budgets were decreased."

There are smaller examples, too.

And Rockman stressed the time can’t be regained, adding: "It’s going to take a while to realize what those losses are."