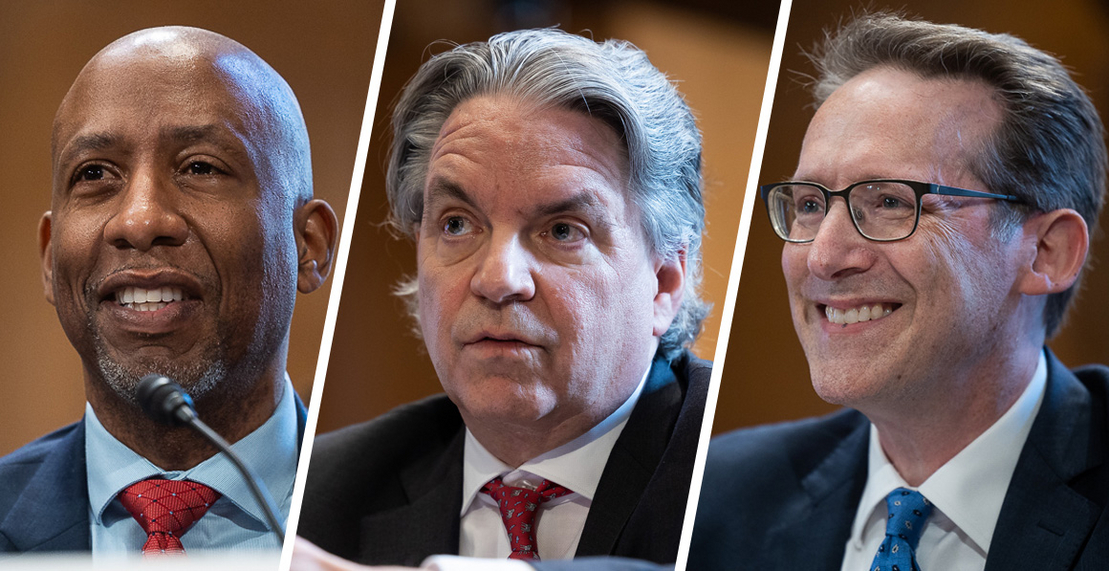 President Joe Biden’s window of opportunity to fill out EPA’s political leadership is shortening, and he trails behind many of his White House predecessors as a trio of his agency nominees still wait for confirmation.

In the mix are appointees key to the Biden administration’s agenda for tackling climate change, addressing environmental justice and boosting enforcement against polluters.

The Senate adjourned earlier this week for its August recess, punting consideration of the nominees to lead air, enforcement and solid waste programs at EPA. If the EPA picks are not confirmed by the end of this Congress, they will have to be renominated and start their confirmation process again. Further, the coming midterm elections could flip control of the Senate and make confirmation even more difficult if Republicans control the chamber next year.

“You just can’t guarantee the future,” Stan Meiburg, formerly acting deputy administrator for the Obama EPA and now the executive director of the Center for Energy, Environment and Sustainability at Wake Forest University, said. “For good government’s sake, these nominees should be acted upon.”

Doug Benevento, who was EPA’s acting deputy head during the Trump administration and is now counsel at Faegre Drinker Biddle & Reath LLP, said, “If you look at the actual legislative days they have left, it’s not a lot,” adding, “The question is, where do you slide in the nominations?”

So far, eight of Biden’s EPA nominees have been confirmed. Several past presidents had more nominees approved at the agency at this point of their time in office, with some having all of EPA’s senior posts filled with their appointees.

At this stage, Barack Obama had 14 EPA nominees confirmed, including his pick for the agency’s inspector general. George W. Bush had 13. Bill Clinton and George H.W. Bush both had 11 agency positions filled with their appointees. Donald Trump had seven EPA nominees confirmed at this point in his term — although one, former Administrator Scott Pruitt, had resigned under a crush of ethics troubles by then.

Nonetheless, the work continues at the agency with or without confirmed political leadership.

“At the 10,000-foot level, you want your people confirmed, but now 18 months into the administration, they probably have found a rhythm and are getting done what they want to get done,” Benevento said, referring to the Biden EPA.

Another Biden EPA nomination — for Amanda Howe, who was tapped in June 2021 to lead the mission support office — was withdrawn in April.

Last weekend, the Senate discharged Uhlmann’s nomination on a 51-39 vote. Only one Republican, Sen. Susan Collins of Maine, voted for him.

The former federal prosecutor and University of Michigan law professor was nominated more than a year ago. The Senate Environment and Public Works Committee deadlocked on his nomination, requiring the discharge vote. Uhlmann will need more floor votes in the fall to be confirmed.

Progress in his confirmation battle came after a blitz of letters supporting Uhlmann blanketed Senate offices in recent months.

“The nation has rarely needed strong and fair enforcement of our environmental laws as much as it does today. Protecting our water, air and land, and confronting climate change, has never been more important,” a group of environmental lawyers, including some of Uhlmann’s former Justice Department colleagues, said in one letter sent last week.

Christine Todd Whitman, who led EPA during the George W. Bush administration, was among those urging senators to confirm Uhlmann. She too signed onto a letter backing him along with four other ex-EPA administrators.

“Right now, enforcement is critical for the regulations they have got that are in place to protect human health and enforcement,” Whitman, also a former New Jersey governor, told E&E News last month.

More broadly, she lamented how politics has held things up.

“In general, we have got to stop this ability to put people’s lives on hold forever,” Whitman said. “There should be a reasonable time period to be brought to the floor.”

Uhlmann is not alone in seeing delays.

Waterhouse, a Howard University law professor who helped build its environmental justice center, was nominated more than a year ago. The EPW panel tied on advancing his nomination, so he will require a discharge vote.

Waterhouse is serving at EPA as a deputy assistant administrator in its solid waste office. Yet he doesn’t have the same power if he was confirmed, according to Mathy Stanislaus, who led the office during the Obama administration.

EPA’s land office has a huge role to play in infrastructure spending, running the Superfund and brownfield programs, as well as responding to natural disasters, like flooding and hurricanes.

“There is the basic of having the political leadership reacting to those climate-fueled events with state and local leadership,” Stanislaus, now vice provost and executive director of the Environmental Collaboratory at Drexel University, said. “It’s helpful having him there being engaged in those conversations, but he is not clothed in Senate confirmation that gives him the authority.”

Benevento noted EPA has an experienced career official — Barry Breen, principal deputy assistant administrator — heading the waste office on an acting basis, a role he had for months during the Trump administration.

“Barry is very good, and from what I can see, he is doing a great job. He had that experience with us,” Benevento said. “The program is in good shape with Barry leading it.”

“President Biden has had fewer EPA nominees at this point in his administration because of a combination of delay in nominating them in the first place — most obviously with Goffman — and picking people with extreme political views or who have a track record of overreach from the Obama administration and therefore face hurdles in clearing a 50-50 Senate,” Peter Hoffman, a Capito spokesperson, told E&E News.

Hoffman added, “More moderate nominees made in a more timely fashion would have gone a long way toward addressing this, especially if the EPA and administration were more responsive to oversight and requests from senators, who may feel their only recourse to get answers is delaying nominees.”

Representatives for Sen. Tom Carper (D-Del.), the committee chair, or Senate Majority Leader Chuck Schumer (D-N.Y.) did not respond to E&E News’ requests for comment for this story. Neither did a White House press official.

Sen. Cynthia Lummis (R-Wyo.) placed holds on EPA nominees after the agency rejected her state’s regional haze plan for a coal-fired power plant. She lifted her hold on Uhlmann in a show of good faith for negotiations between EPA and Wyoming but not yet for the two other nominees.

“Sen. Lummis still has the holds in place for those nominees,” Stacey Daniels, a Lummis spokesperson, told E&E News.

Other obstacles remain. In February this year, Sen. Bill Cassidy (R-La.) vowed to block Biden’s EPA nominees over the agency’s delay in approving Louisiana’s application to regulate carbon capture projects in the state.

Not ‘easier’ under a Republican Senate

Across agencies, Biden has struggled to have his nominees confirmed. The Senate has confirmed 442 of his picks so far, according to positions tracked by the Partnership for Public Service, a good government group.

That count again lags behind Obama, who had 517 confirmed, and George W. Bush, who had 531, by Aug. 8 of their second year in office.

Not included in the partnership’s figures are judges, marshals and part-time positions to boards and commissions.

“Over the past couple of decades, it has become a longer and a more difficult process to bring in appointees,” Mustafa Santiago Ali, once an EPA environmental justice adviser, told E&E News.

Ali added that Senate-confirmed appointees oversee the budget and personnel as well as finalize rules and strategic plans.

“We need to have the individuals with the authority and the expertise to make sure all of those elements are in place,” Ali, now an executive vice president at the National Wildlife Federation, said. “There has to be someone who the buck stops with.”

Republicans could take control of the Senate after the upcoming midterm elections. If so, Biden’s EPA nominees would have a more difficult path to confirmation.

Meiburg said a Republican-led Senate could hold confirmation hearings again for Biden’s EPA picks, which could focus on administration policies rather than on the nominees’ qualifications.

“I think it wouldn’t make it any easier,” Meiburg said.