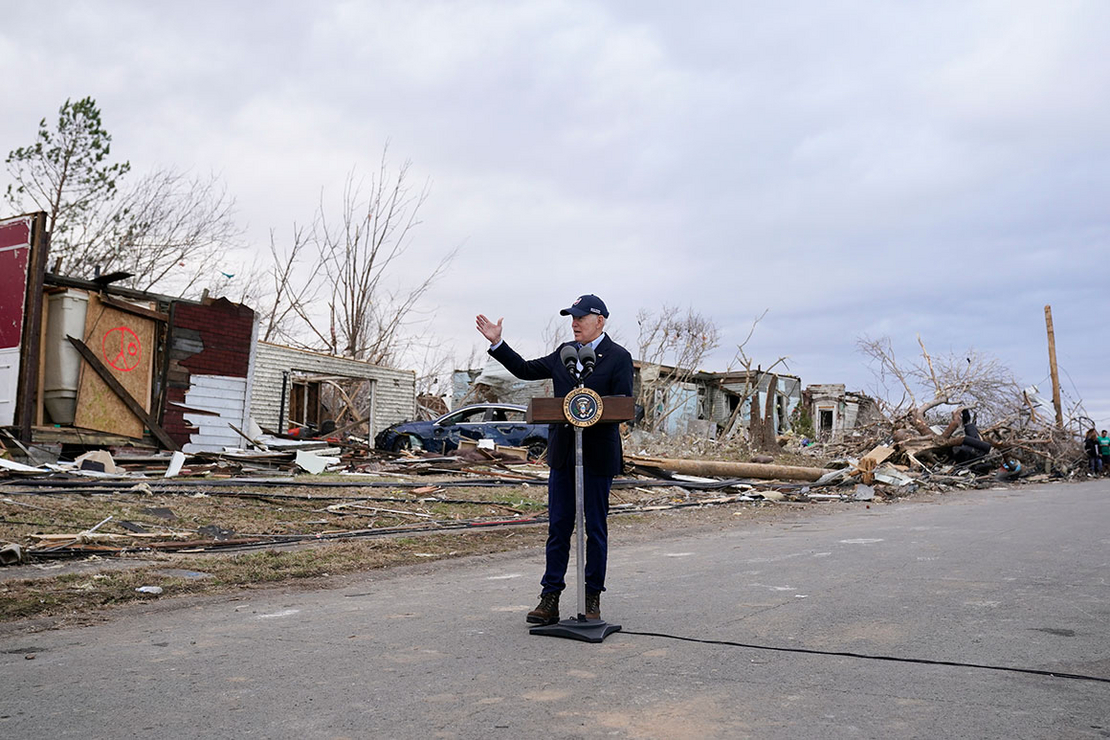 President Biden promised on the campaign trail that he would urge his Department of Justice to “strategically support” climate change-related lawsuits against polluters.

But as Biden marks one year in office tomorrow, Attorney General Merrick Garland has not — as of yet — waded into the legal battle, despite repeated entreaties from Senate Democrats and the chief lawyers in a half-dozen blue states that are pursuing claims against the oil and gas industry.

The lack of intervention is alarming to advocates for the climate liability lawsuits, which aim to hold Exxon Mobil Corp., Chevron Corp. and other energy firms financially accountable for their contributions to erosion, wildfires and other consequences of a changing climate.

“I await any sign that is actually happening,” Rhode Island Sen. Sheldon Whitehouse told E&E News of DOJ intervention. Whitehouse last year joined eight other Senate Democrats in a letter urging Garland to get involved in the massive set of climate liability lawsuits from state and local governments across the country (Climatewire, May 12, 2021).

A DOJ spokesperson said it had "taken a wide variety of actions that address the climate crisis and will continue to look for ways to do so, including opportunities" to participate in the cases. "While we can’t comment on the deliberative process, climate change and environmental justice remain among the department’s top priorities," spokesperson Wyn Hornbuckle said.

Biden’s pledge to get involved in the climate fight came as part of his environmental justice plan, which emphasized the need to reduce pollution in low-income neighborhoods and communities of color.

During her own presidential campaign, Vice President Kamala Harris called for oil companies to be “held accountable,” saying they are “causing harm and death in communities."

Climate lawyers had expected the Biden administration to stand in contrast to Trump’s DOJ, which filed a half-dozen "friend of the court" briefs in support of the oil industry’s arguments in a procedural battle that has stalled the climate liability lawsuits.

While state and local governments have filed the cases in state courts, industry attorneys have tried to get the challenges bumped to federal courts, where the companies may stand a better chance of winning. The Supreme Court last year allowed federal appeals courts to consider a broader set of arguments in favor of federal jurisdiction, further delaying the climate cases (Greenwire, May 24, 2021).

“The president pledged that they would ‘strategically support’ the cases, and they have failed to do that,” said Richard Wiles, president of the Center for Climate Integrity. “And that’s significant. The Department of Justice is an important voice on the legal landscape, and its absence is conspicuous.”

Wiles said the department under Biden has not submitted briefs “or offered any support” for any of the cases — most of which are currently entangled in disputes over whether the cases should be heard in state or federal court.

Wiles said it’s possible that DOJ lawyers don’t believe state courts are the proper venue but noted that federal appeals courts have mostly ruled in favor of keeping the lawsuits in front of state judges.

“You would think that the DOJ would not hesitate to concur with what the courts have said,” Wiles said. “But they’re not doing that.”

Taking on the oil industry

Wiles said the U.S. government has historically been reluctant to confront the oil and gas industry.

Biden’s political fortunes have been hurt by rising gas prices, and the president was forced to defend himself last fall against charges of hypocrisy for calling on the world’s largest oil producers to increase output, even as he called for the world to slash emissions and move beyond fossil fuels.

His administration last year opened up more than 80 million acres of the Gulf of Mexico for auction after a court ruling, despite a campaign pledge to ban new oil and natural gas leasing on public lands and waters (Greenwire, Nov. 17, 2021).

“In the broader context, this just continues a very sad trend of administration after administration failing to take on the industry in any meaningful way,” Wiles said.

Donald Kochan, a professor and deputy executive director of the Law & Economics Center at George Mason University’s Antonin Scalia Law School, suggested that the administration could be waiting for its proposed climate legislation to succeed — or fail — before it engages with the judicial branch.

If Biden is unable to land his ambitious climate spending package, its collapse could “add fuel” to the plaintiffs’ argument that legislative gridlock has made it impossible to achieve climate gains in Congress, Kochan said.

“It could give them the ammunition to say, ‘Once again, we tried to go the legislative route, and again it failed. The court is the last and only hope,’“ he said.

Yet Kochan said he believes intervention by the judicial branch would be a mistake.

“It’s not a legitimate argument to say that because the Legislature is not producing, that it’s a legitimate claim for expanding the constitutional powers of the courts,” he said. “The courts are limited and should stay in their own lane. Congress and the administrative agencies are the best suited to resolve complex issues of policy and science that require expert analysis.”

He added, “If the executive branch becomes a cheerleader for judicial encroachment into their own sphere of authority, then one of the primary constitutional checks breaks down.”

Democratic state attorneys, who have used congressional hearings and letters to urge Garland and DOJ to intervene in the climate liability litigation, were largely silent on the Biden administration’s lack of action.

Minnesota Attorney General Keith Ellison, who wrote a March editorial calling Biden’s pledge to back the lawsuits a “vitally important part of the new administration’s broader effort to restore trust in government,” declined through a spokesperson to comment.

Ellison in June 2020 filed a lawsuit against Exxon; Koch Industries Inc.; and the American Petroleum Institute, an oil and gas trade group, accusing the industry of misleading Minnesotans about climate change.

He and five other Democratic state attorneys involved in the climate liability fight last year urged DOJ to disavow the amicus briefs that the Trump administration had filed on behalf of the fossil fuel industry in some of the cases (Climatewire, April 7, 2021).

A spokesperson for D.C. Attorney General Karl Racine, who led that missive, declined comment but pointed to the letter, which cited Biden’s campaign pledge and argued that intervention by Trump’s DOJ had undermined their efforts.

Sara Gross, chief of the Affirmative Litigation Division at the Baltimore City Law Department, said the city would “certainly welcome the administration’s support” in its efforts “to hold fossil fuel companies accountable for their deception about their products and climate change and the costs that their actions are imposing on our residents, workers and businesses.”

The 4th U.S. Circuit Court of Appeals will take a fresh look next week at Baltimore’s lawsuit against BP PLC for flooding and other climate-related damages.

Although the administration hasn’t intervened in the climate liability suits, Biden’s campaign promise has come up in at least one other case.

Energy Policy Advocates, a conservative research group, pointed to the pledge in a brief it filed last February in the U.S. Court of Appeals for the District of Columbia Circuit in defense of the Trump administration’s decision to leave ozone standards unchanged.

The group’s attorney — Christopher Horner, who in a Washington Times column called Biden’s pledge an effort to “weaponize the DOJ” — warned in the brief that if the states that had sued over the ozone standards were unsuccessful in challenging the government, they might try to pursue public nuisance litigation.

“Further troubling and adding to concerns … is that the new administration ran for office vowing to deploy its Department of Justice to assist the same plaintiffs in private litigation,” Horner wrote.

The American Petroleum Institute, the oil and natural gas industry trade group that has been named as a defendant in several of the climate liability lawsuits, criticized Biden for issuing the pledge when he released his environmental justice plan in July 2020.

Paul Afonso, API’s senior vice president and chief legal officer, said at the time that “rather than wasting taxpayer resources endlessly litigating,” the focus should be on industry innovation and emissions reduction.

While API did not directly address the administration’s role in the litigation, the group pointed to a statement from Afonso in which he said, “The record of the past two decades demonstrates that the industry has achieved its goal of providing affordable, reliable American energy to U.S. consumers while substantially reducing emissions and our environmental footprint. Any suggestion to the contrary is false.”

Karen Sokol, a law professor at Loyola University, said Biden’s DOJ likely has limited bandwidth as it prepares for what she called a “coming wave of anti-climate lawsuits” challenging the steps it has taken to address emissions. Opponents have sued over the administration’s pause on oil and gas leasing and are mounting challenges to Biden’s bid to raise the cost of carbon.

And Solicitor General Elizabeth Prelogar is getting ready to defend EPA’s ability to regulate greenhouse gases from power plants before the Supreme Court next month in a case that could have major implications for Biden’s climate agenda (Climatewire, Nov. 1, 2021).

But Sokol said she had expected the administration to at least counter the Trump DOJ argument that the climate liability cases should be heard in federal court.

“I know the DOJ has a lot on its plate, but that would seem to be something that is pretty easy for them,” she said. “This is not strategic support in terms of weighing in on the merits of these claims. This is just based on a federal/state jurisdictional matter, and the executive has something to say about that.”