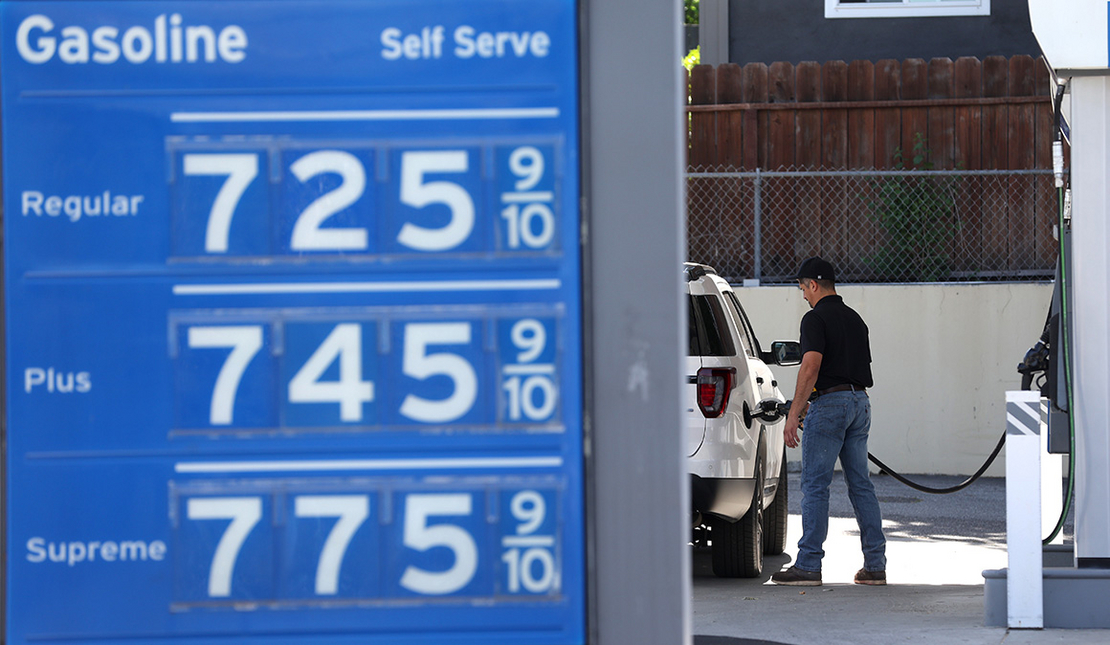 The twin threats of inflation and high gasoline prices continued to drag on the Biden administration this week, and analysts were beginning to predict that it will take strong economic medicine to deal with the malaise.

The price of regular U.S. gasoline hit yet another record yesterday, averaging about $4.67 per gallon, according to AAA. Prices typically climb during the summer driving season, but 75 percent of drivers told the automobile association in a recent survey that they’d change their driving habits if the price hit $5 a gallon.

That phenomenon — which economists call demand destruction — will ultimately lead to lower prices, but high prices will be a brutal reality in the meantime for people who have to drive to work in person, Kevin Book, managing director at ClearView Energy Partners LLC, said in an interview. There’s also a historic correlation between high gasoline prices and recessions, Book said. The implications could stretch from pocketbooks to election results.

The last time gasoline averaged more than $4 a gallon was in 2008, just before the housing crisis overturned the U.S. economy.

“There is a way out of this mess, but nobody likes it,” Book said.

To be sure, $4.67 for regular gasoline did not surpass an earlier AAA record from July 2008, if adjusted for inflation. That $4.11 average would be more than $5 a gallon today.

High energy prices have contributed to U.S. price inflation, which averaged 8.3 percent in April, down from the previous month but still near a 40-year high, according to the Bureau of Labor Statistics. Treasury Secretary Janet Yellen said Tuesday she had been wrong about the direction that inflation would take, and she said the Biden administration supports the idea of raising interest rates to cool down the economy and dampen inflation.

President Joe Biden said in an opinion piece published this week by The Wall Street Journal that the economy was transitioning from rapid growth as it recovered from the recession that the Covid-19 pandemic caused.

“During this transition, growth will look different,” he wrote.

Many of the drivers of inflation, including the Russia-Ukraine war and Covid variants, have been outside the administration’s control, White House press secretary Karine Jean-Pierre said yesterday.

“If we have learned anything in the past two years, it’s that our globalized economy is tied to the world around us,” she said.

Biden announced the largest-ever release from the Strategic Petroleum Reserve in March, and worked with other countries to release oil from their own stocks. The administration has also taken other price-fighting steps, including waiving some requirements for summer-blend gasoline and has approached energy companies about reopening refineries that closed during the pandemic, Bloomberg reported.

But energy prices have stayed stubbornly high. The Russian invasion of Ukraine sent prices spiking in February and March, and prices spiked again this week when the European Union moved to ban most Russian oil imports by the end of the year. The E.U. also moved to prevent companies from insuring cargoes of Russian oil at sea (Climatewire, June 1).

The White House is weighing a visit to Saudi Arabia that would also include a meeting of other leaders in the Middle East, the Associated Press reported yesterday, citing a person familiar with White House planning. The person spoke on the condition of anonymity to discuss the yet-to-be finalized plans.

Any meeting between Biden and de facto Saudi ruler Prince Mohammed bin Salman during a Biden visit to the region could offer hope of some relief for U.S. gasoline consumers, as Saudi Arabia is a major oil producer. But it also risks a public humbling for the U.S. leader, who in 2019 pledged to make a “pariah” of the Saudi royal family over the 2018 killing and dismemberment of U.S.-based journalist Jamal Khashoggi, a newspaper critic of many of the brutal ways that Prince Mohammed operates.

Jean-Pierre declined yesterday to comment on whether Biden will travel to Saudi Arabia.

Russian oil will eventually find its way to China and other Asian markets, analysts at JPMorgan Chase & Co. said in a research note yesterday. That’ll help relieve some of the pressure on world prices. International oil prices have been trading for more than $110 a barrel recently.

But it’ll create a bifurcated market where Western consumers pay higher energy prices, the analysts’ note said. One potential upside could come from Saudi Arabia and other OPEC members, who are meeting today to discuss their production plans.

The Middle Eastern countries have worked with Russia for the last few years to set production levels and control prices. The OPEC members are considering excluding Russia from future production quotas, which could allow them to ramp up their own production and help alleviate prices, the research note said.

“While there is still no indication that OPEC plans to increase output following this potential decision … making the separation of Russia from OPEC+ quotas opens up that possibility,” the note said, using the shorthand to refer to a coalition of OPEC countries and their allies.

American producers could fill some of the production shortfall, but they’ve been under pressure from bankers and shareholders to avoid overspending on new drilling projects. That could change as production from the Permian Basin in Texas and New Mexico continues to climb, the data firm Rystad Energy said in a recent research note.

The sprawling oil field could add 1 million barrels of output a day by 2023, supplying half of U.S. crude, Rystad said.

“The Permian has become the hot spot for US oil production thanks to significant resources, low breakeven costs and high oil content,” Espen Erlingsen, head of upstream research at Rystad, wrote. “This trend is only likely to continue as global oil markets struggle with supply constraints and the demand for oil shows little sign of easing.”

But there’s been no action to tackle a major driver of high fuel prices — the high margins that refining companies are seeing for each barrel of crude they process into gasoline and diesel (Energywire, May 5).

The margins jumped at a number of independent refiners, along with integrated companies like BP PLC, during the first three months of the year. The spread is likely to pump up profits again during the three-month period that ends June 30, analysts at Tudor, Pickering, Holt & Co. wrote in a research note this week.

“Refiners are looking at an absolutely unreal” quarter, the note said.