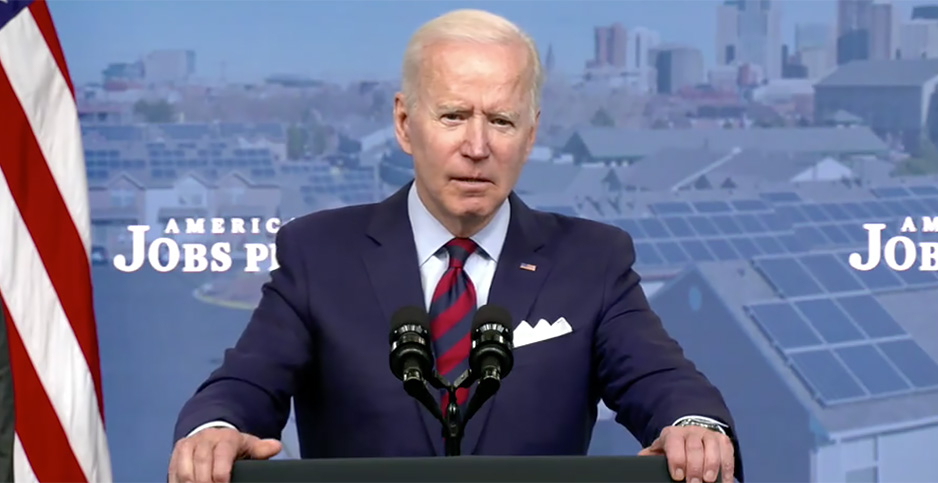 The Treasury Department’s Office of Tax Analysis estimated in the report that eliminating subsidies for fossil fuel companies would increase government tax receipts by more than $35 billion in the next decade. The chief effect would be on oil and gas company profits, it said, adding that "research suggests little impact on gasoline or energy prices for U.S. consumers and little impact on our energy security."

The tax plan, a follow on Biden’s $2.2 trillion infrastructure package last week, calls for a 10-year extension of the production tax credit and investment tax credit for clean energy generation and storage. It would also create a tax incentive for long-distance transmission lines considered critical for renewable expansion and further expand tax incentives for electricity storage projects. It outlines international tax policy changes, including eliminating deductions for corporations for offshoring jobs and a hike in the corporate tax rate to pay for Biden’s plan.

The proposal came as President Biden gave a speech at the White House pitching his American Jobs Plan, saying he’d be open to compromises, even as he cited fossil fuel "giveaways of $40 billion" as one of the "tax breaks that I find difficult to explain."

The Treasury report did not name any fossil fuel tax breaks that would be targeted but argued that tax preferences for oil, gas and coal producers shift energy production away from cleaner alternatives and undermine efforts to contain climate change.

"Subsidized fossil fuels have also negatively impacted air and water quality in U.S. communities — especially in communities of color," Treasury said. It added that fossil fuel companies receive an additional benefit because they sell products that create problems but "do not have to pay for the damages caused by these externalities."

It also pointed to a recent paper from the National Academy of Sciences finding "a significant portion of these benefits accrue to relatively few companies."

Treasury said that incentives for clean energy production and investments are "insufficient to match the massive scope of our environmental and climate problems," noting that the production tax credit for renewable electricity producers lapsed and was retroactively extended five times between 1999 and 2015, "leading to significant policy uncertainty for renewable producers."

ClearView Energy Partners LLC noted that although the Treasury did not spell out any fossil provisions, the $35 billion in tax breaks it mentioned suggests an effort to eliminate direct incentives such as deductions for intangible drilling costs. The fossil fuel industry also enjoys master limited partnerships, a deduction for domestic manufacturing and clean coal investment credits, among others.

In a note to clients, ClearView said that Democrats could have difficulty finding enough support to eliminate all fossil energy tax provisions, "but we reiterate that direct and indirect provisions that primarily affect international supermajors remain at risk."

Some environmentalists said the administration’s target of $35 billion over 10 years is not enough and that Congress should go further.

"Fossil fuel corporations receive $15 billion in direct subsidies from the federal government every year," said Greenpeace USA’s senior climate campaigner, John Noël. "Not a dime of our tax dollars should go toward corporations that poison our communities and wreck our climate."

In his speech, Biden took issue with Republican opposition to his vision of "infrastructure" in the package, arguing that preparing the U.S. to better withstand more intense storms propelled by climate change should be included. Republicans have panned the proposal as a grab bag of Democratic wishes.

"Ask all those farmers and small-business owners and homeowners whether investing in clean energy to fight the effects of climate change is part of infrastructure," said Biden, who stood before screens displaying various projects, including buildings topped with solar panels.

Infrastructure in the 21st century depends on traditional projects such as roads and bridges, but also on an electric grid "that won’t collapse in a winter storm or be compromised by hackers at home or abroad," he said.