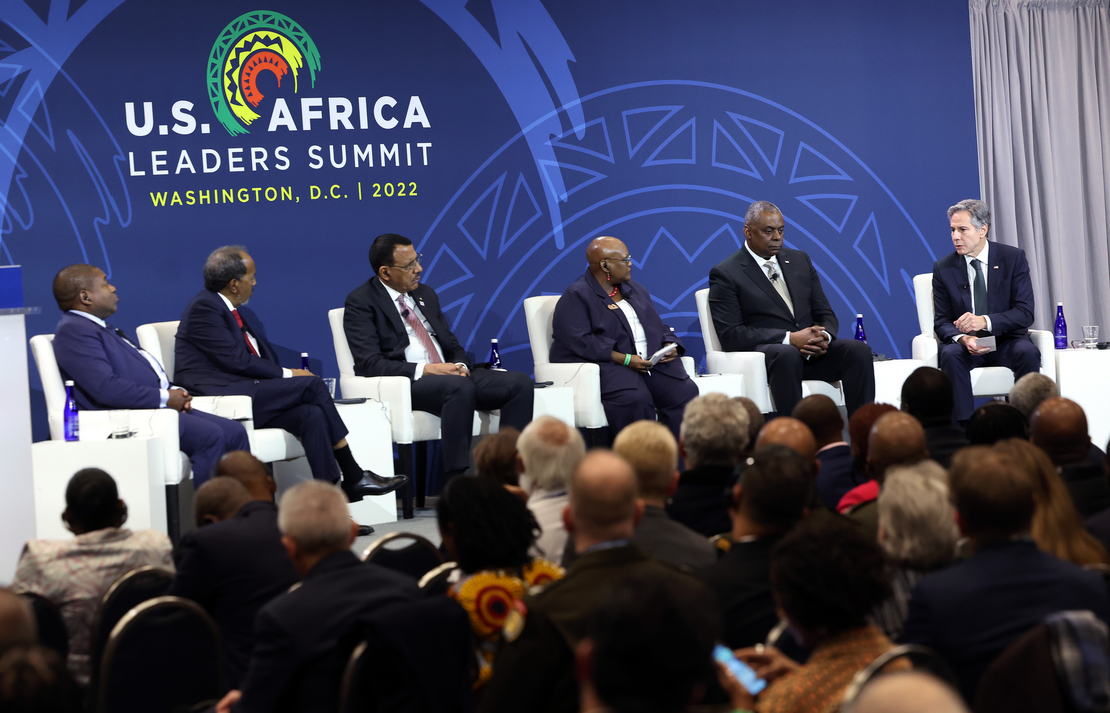 President Joe Biden wants to build out the clean energy industry in Africa as part of a long-term strategy to help the region mitigate and adapt to the worst effects of climate change.

That is a pillar of the U.S.-Africa summit that started Tuesday in Washington. The event brought together leaders from 49 of Africa’s 54 countries to discuss climate, financial, health and political challenges faced by the region. Biden will host the group Wednesday at the White House.

The African continent is one of the most vulnerable regions in a warming world, even as it has contributed little to the carbon emissions driving climate change. The Biden administration is particularly focused on addressing food insecurity across the region — which is one of the most impoverished areas of the world — because it is being exacerbated by climate change.

“We’re dealing now with a massive food insecurity crisis; it’s the product of a lot of things,” Secretary of State Antony Blinken told African leaders gathered at a convention center in downtown Washington on Tuesday. “As we all know, it’s the product of climate change … and so, we have an immediate emergency response, especially as we’re looking at historic droughts in different places, we’re looking at famine conditions in a number of countries.”

That includes about $300 million through fiscal 2023 to support renewable energy projects. Some of the funding will be used to bolster a new U.S.-Africa Clean Energy Network to connect clean energy companies to market opportunities that will increase access to reliable clean electricity. On the first day of the summit, leaders announced a new $25 million loan to build the first solar power plant in sub-Saharan Africa, in Malawi.

The United States will support an effort to increase the number of women in Nigeria, Kenya and South Africa participating in the green energy industry. It will give out more than $4 million in grants to support a number of clean energy projects, including a biomass power plant in Cote d’Ivoire, a clean hydroelectric power project in Sierra Leone and a battery energy storage technology project in Zambia.

About 600 million people in Africa don’t have access to electricity, and one of the African Union’s main priorities entering the summit is to accelerate efforts to meet growing energy demands without sacrificing economic growth. For some countries, that means tapping all forms of energy.

Africa is still at a pivotal energy moment, where many countries are just discovering the extent of their natural gas resources, Emmanuel Marfo, chair of the Environment, Science and Technology Committee in the Ghanaian Parliament, told E&E News in a briefing. So, if western nations want to encourage a shift away from fossil fuels, there also needs to be a conversation on how to compensate those countries for leaving fossil fuels in the ground, he said.

“It comes down to the discussion about stranded assets. If we really want to move away from the dependence on fossil fuel, then the question is what happens to the prosperity or the development and industrialization of these countries that could have depended on the exploitation of their fossil fuels.”

Not all African countries have fossil fuels to tap. But they do have great potential for building out solar and other renewables to power the continent’s development, according to the International Energy Agency.

In Africa, there is relatively little use of renewables, and as a result most countries don’t fully understand or appreciate their benefit, said Jacqueline Amongin, chair of the African Parliamentarians Network on Climate Action. Funding from the United States and other countries at the international climate talks can help shift that thinking, she said.

“Putting renewables in Africa is key because, as of now, Africa is still behind in adopting different technology,” said Amongin. “Africa contributes minimally to emissions, but we all have to act because the impacts are huge on the continent.”

With a growing population and a strong push for development, “the region is going to be critical for us in term of meeting global poverty alleviation goals, global growth goals, but also meeting our climate goals,” said Lily Odarno, director of energy and climate innovation for Africa at the Clean Air Task Force.

And that makes it critical that the United States recognizes the complexities of Africa’s energy transition.

Speaking at an event earlier this week hosted by the Carnegie Endowment for International Peace, Ervin Massinga, deputy assistant secretary for the State Department’s Bureau of African Affairs, said the United States is looking for ways to help Africa improve energy access through investments in cleaner energy production.

New deals, including some on energy, will be announced during an Africa business forum Wednesday, he said.

African leaders are seeking tangible investments in the continent’s future, “not promises of something to come,” Amani Abou-Zeid, the African Union’s commissioner for infrastructure and energy, said at the Carnegie event.

The world has greatly underinvested in the continent’s clean energy transition. Only around 2 percent of renewable energy investments have gone to Africa. Annual climate finance flow are just 11 percent of what’s required to prevent and respond to global warming, according to a study by the Climate Policy Initiative.

At the same time, the African Development Bank Group estimates that the continent loses between 5 percent and 15 percent of its gross domestic product each year to the impacts of climate change.

At climate talks last month Biden announced a $500 million deal to help the host country, Egypt, transition from natural gas to wind and solar. Under that deal, the United States, Germany and the European Union will pay Egypt to replace five gigawatts of power produced with natural gas with 10 gigawatts of renewable energy.

In return, Egypt agreed to quadruple its amount of installed renewable power by 2030 and take greater actions to cut emissions.

“Countries that are in a position to help should be supporting developing countries so they can make decisive climate decisions, facilitating their energy transitions, building a path to prosperity and compatible with our climate imperative,” Biden told a packed conference hall in Egypt last month.

The Biden administration also is looking to break its reliance on China and Russia for the critical minerals used in clean energy manufacturing, batteries and technology by ramping up production in Africa. Marfo, of the Ghanian parliament, said that won’t make sense for African countries unless they see direct benefits.

“In the past, Africa has not really benefited from our natural resources and to some extent there has been some exploitation of the continent’s resources and I think moving forward we need change that trajectory,” he said. “At the end of the day, if you have natural resources, that is going to give you good food on table, provide shelter for your people, good health for your people.”