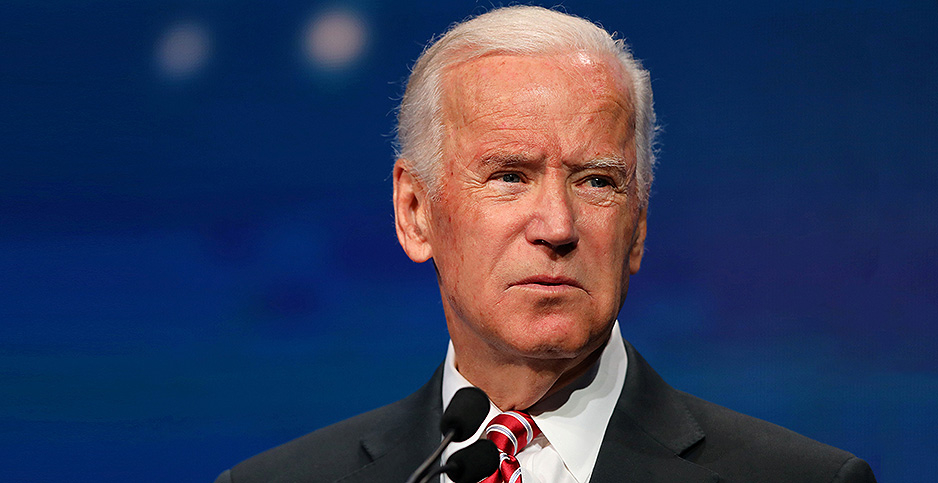 Joe Biden has a history with cars.

"I shouldn’t say this on television — I like speed," the then-vice president said on an episode of "Jay Leno’s Garage" before doing a burnout in his classic Corvette, its engine restored by his sons as a Christmas gift.

Biden’s own father was a used car salesman. Cars even animated The Onion‘s satirical portrayal of "Diamond" Joe Biden: "They don’t make kick-ass T-tops like this anymore, sweetheart," his character says in the article headlined "Shirtless Biden Washes Trans Am In White House Driveway."

Now, as Biden tops polls of potential 2020 Democratic presidential contenders, his up-and-down record on car standards could become a point of contention once candidates start touting their climate credentials.

As vice president, Biden helped orchestrate the country’s landmark emissions standards for automobiles, which have become America’s top source of greenhouse gases. He helped get the rulemaking process started early in Obama’s first term, while also selling the policy to longtime critics like auto executives, unions and Michigan’s congressional delegation.

Biden knew how to talk with the opponents because he used to be one of them. As Delaware’s senator, he spent years criticizing higher fuel efficiency standards.

He voted at least five times against raising standards for tailpipe emissions. That left a mark on his environmental legacy. The League of Conservation Voters scores his legislative career as 83 percent green — with about one-fifth of his anti-environment votes coming on transportation.

Some greens say Biden’s evolution is similar to the arc of the Democratic Party in general: The decline of traditional manufacturing jobs, the emergence of climate science and advances in renewable energy have allowed blue-collar politicians to act more green.

In response to the oil embargo from Arab states in 1973, Congress instituted the corporate average fuel economy, or CAFE, standard. It required car and light-truck manufacturers to double their fleets’ fuel efficiency between model years 1975 and 1985.

Congress then did nothing on CAFE for three decades — often with the support of Biden, who relied on the backing of his state’s largest union, the United Automobile Workers.

In 1991, when 36 Republicans and Democrats co-sponsored a bill to boost fuel efficiency standards, Biden declined to join. The year before, he had helped kill two proposals to lower ozone, particulate matter and greenhouse gas emissions from cars.

And in 1999, as part of an appropriations fight, Biden voted against a resolution that said the freeze on CAFE standards should end.

Then came the George W. Bush administration, the Sept. 11 attacks and the war on terror.

CAFE standards had originally been designed as a national security measure before morphing into an environmental policy. It regained that security dimension as American troops poured into the Middle East and Democrats began accusing the Bush administration of starting wars for oil.

In the center of that was Biden. Congress still wasn’t raising CAFE standards, but Delaware’s senior senator was no longer a reliable opposition vote.

The next year, he opposed a proposal from Sen. Dick Durbin (D-Ill.) to raise that standard to 40 mpg. Durbin floated the idea again in 2005, and Biden again voted it down.

But that would be the last time.

"As of now we are stuck in the same old debate: Should we raise fuel economy requirements? Can we do so without jeopardizing jobs? Who should decide how much to raise them and by when?" Biden said in 2006, introducing a bipartisan bill with then-Sen. Barack Obama (D-Ill.) to create a new CAFE formula based on vehicle size (E&E Daily, July 20, 2006).

As the top Democrat on the Foreign Relations Committee, Biden began looking for ways to wean the country off its dependence on Middle Eastern oil.

Ethanol was something he brought up often. He also talked more and more about fuel efficiency.

"It seems to me our failure to set a national energy policy and reduce our consumption of oil has handcuffed our foreign policy and weakened us economically," Biden said at a 2006 hearing on energy dependence. "It literally helps us fuel terrorism — the very terrorism we’re fighting — because some of the dollars we spend on crude wind up in the pockets of the radicals that we are worried about."

Biden started touting "rational" mileage for cars — a big fight, he said, for someone who came from a "UAW state." But his efforts were enough that on a Democratic presidential primary debate stage in 2007, Obama touted Biden as a partner on raising CAFE standards.

Biden ascended to the vice presidency as the auto industry fell off a cliff.

The crisis held an opportunity: The administration attached strings to automaker bailouts, requiring them to make their cars more fuel-efficient.

The industry was willing to bend on CAFE for two other reasons, said Heather Zichal, who worked as Obama’s climate adviser. California’s ability to create tougher standards raised the specter of a regulatory patchwork unless the feds strengthened them across the country. And technology had finally advanced enough to make the new standards feasible.

"This was not a simple set of negotiations," Zichal said, describing Biden and Obama working the phones to smooth the way for tighter auto standards. "There’s a reason we were stuck in neutral on fuel economy for 30 years."

In the White House, Obama and Biden moved up the timeline for the CAFE standards they had helped push through the Senate; the 2020 goal became a 2016 target, and even tighter standards were rolled out for model years 2017-25.

Becker of the Safe Climate Campaign said that amounted to "the single biggest step" any nation has taken to address greenhouse gas emissions, and Biden was "intimately connected with that."

"He is now an environmental hero on clean car issues, and the fact that he may have voted another way 20 years ago isn’t really relevant anymore," Becker said. "I tried for the eight years of the Clinton administration to get them to do half of what Obama did."

President Trump has started to freeze the CAFE standards put in place by Obama and Biden, cutting their potential emissions savings in half, said Josh Linn, a senior fellow at Resources for the Future. But the extremely long planning horizon for automakers means if a Democrat wins in 2020, Trump’s rules might not have been in place long enough to actually affect cars on the road, he said.

"The next four years will be extremely important," Linn said.

So if Biden does run — and prevails — he could get a third chance at rewriting the history of cars.