Biden: Fracking ‘has to continue’ for now 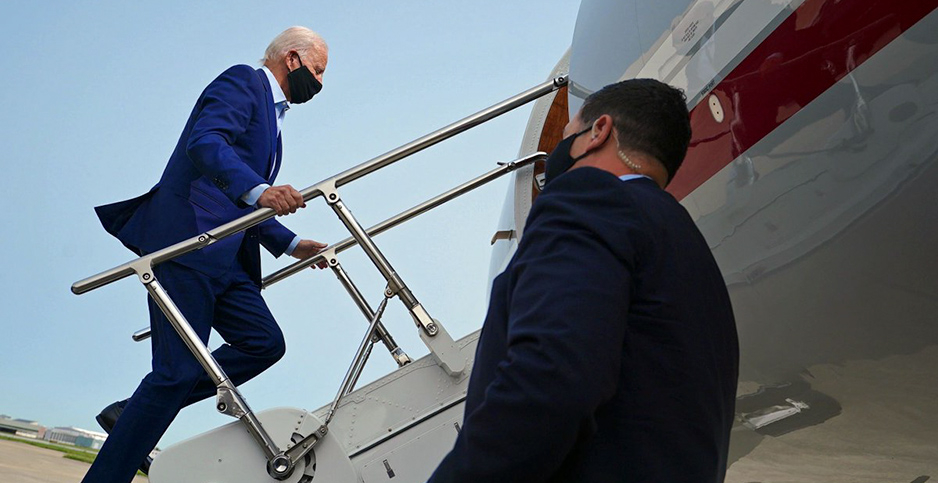 Biden held up energy unions as indispensable partners and said the federal government’s purchasing power could reshape the manufacturing sector. But he gave more ambivalent answers on hydraulic fracturing and the Green New Deal.

"Fracking has to continue because we need a transition," Biden said, after CNN host Anderson Cooper pressed him to reconcile his support for fracking with his description of climate change as an existential threat.

President Trump’s campaign responded by accusing Biden of lying in his answers rather than attacking their substance.

When Biden was first asked last night if he supported fracking, he said he did. But he immediately emphasized the harm that local communities have suffered from abandoned wells leaking methane. He said he wants the government to employ 250,000 union workers to cap those wells.

"And so not only do I continue to support [fracking] … it’s important for this community. It’s important for Pennsylvania, and Ohio and other states. It’s an important business. And it’s a lot of wages that are involved in that. But beyond that, beyond that, we can also get people working now capping the wells that are left uncapped right now," Biden said.

Pennsylvania is home to somewhere between 200,000 and 750,000 abandoned wells, among the highest concentrations in the nation. There are an estimated 3 million abandoned wells in the U.S.

Their methane emissions accounted for 5% to 8% of the commonwealth’s 2016 greenhouse gases, with the lion’s share coming from a few high-emitting wells (Energywire, May 20, 2019).

Biden also tried to distinguish his plan from the Green New Deal without belittling it.

When a voter asked if he supported the Green New Deal, Biden outlined the major points in his plan that climate activists like: aggressive targets for decarbonizing electricity and new buildings, with massive spending plans for infrastructure.

Those policies, he said, would "vastly cut down on the amount of fossil fuels that we use."

Biden avoided mentioning the Green New Deal until Cooper pressed him on whether the climate framework was "too much."

"No, I don’t think it’s too much," Biden replied. "You know, I have my own deal. I’ve laid it out in great detail. The Democratic Party’s adopted it as the platform. It requires for us to move in a direction to fundamentally change the way in which we deal with the environment."

Later in the night, a Republican who voted for Trump in 2016 began asking Biden about regulations on farms, like the Waters of the U.S. rule. Biden interrupted when she suggested he supported the Green New Deal.

"Policies under the Obama administration, such as the rules under the waters of the U.S. act, threaten to increase [overregulation of farms], as [do] policies proposed through the Green New Deal, which your climate plan embraces," said voter Julie Masser Ballay.

"Excuse me, if I could finish," she responded, and Biden apologized. In his answer, he stressed research into alternative fertilizers from manure, as well as paying farmers whose crops sequester carbon.

Unions leaders have complained that they were shut out of drafting the 2019 Green New Deal resolution. Biden emphasized that they contributed to his plan.

"Before I actually went through the whole thing, I sat down with every one of the major unions. They all endorsed me. And I said look, this is what it’s going to mean for you. It’s not only good for the environment, it’s going to provide jobs, and you’re not going to lose your jobs. You’re not going to lose your jobs. Not producing the same energy — producing a different kind of energy," he said.

The pandemic dominated the town hall’s first half, with climate questions coming around the 50-minute mark of the 75-minute event. Afterward, Biden said it’s clear the pandemic still dominates public attention, according to a pool report.

Polling averages of likely voters in Pennsylvania show Biden leading Trump by about 4 or 5 percentage points. That’s narrower than Hillary Clinton’s lead at this point in the 2016 race, when RealClearPolitics showed her ahead by more than 6 percentage points.

The state could be the tipping-point for either candidate’s electoral college majority. Both campaigns see the fracking industry as critical to the prospects for victory. But some environmentalists have started pushing back on that.

Climate Power 2020, the political group funded by major environmental organizations, has conducted polling that suggests Pennsylvanians who hear both Republican and Democratic arguments on fracking shift toward Biden.

Members of Trump’s rapid response team claimed Biden was lying when he said he supported fracking.

Trump campaign spokesman Tim Murtaugh said CNN allowed Biden to give dishonest answers on the coronavirus response and other topics.

"He managed to obfuscate on fracking by claiming he’d support the natural gas industry just long enough to kill it. This was classic Joe Biden: untethered to the facts, his own record or reality," Murtaugh said in a statement.