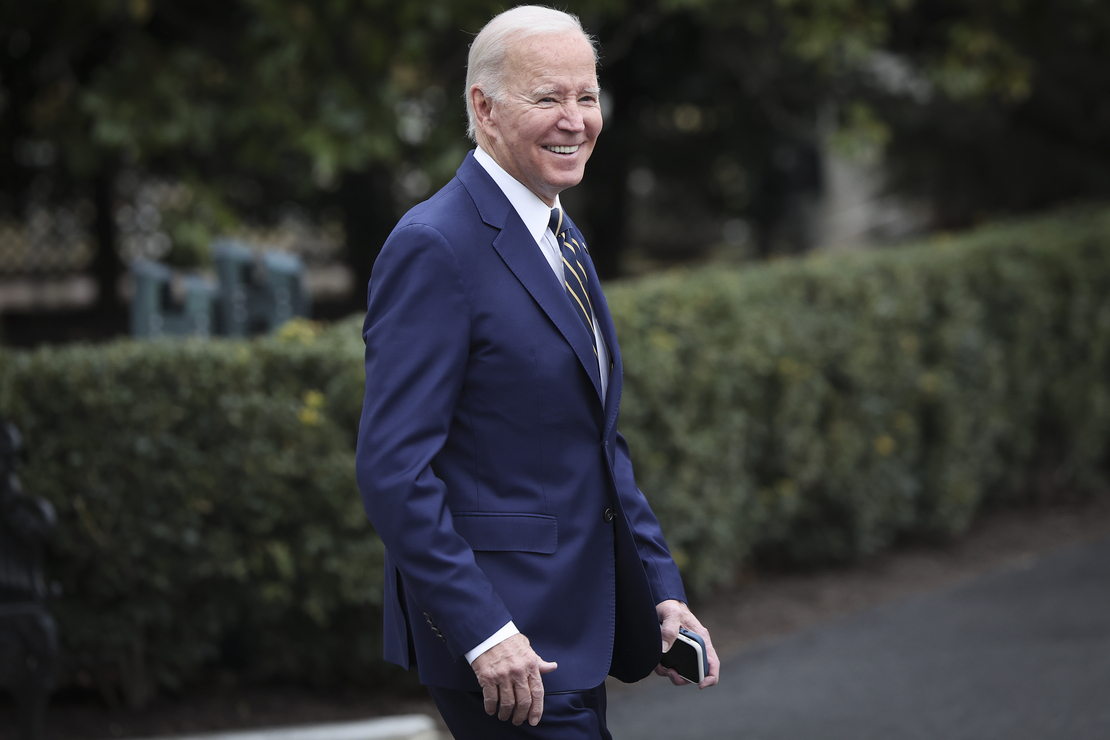 President Joe Biden departs the White House on Thursday. He is scheduled to travel to California to view damage caused by recent storms. Win McNamee/Getty Images

President Joe Biden will put the spotlight on extreme weather as he travels to California to see the devastation from recent storms. Meanwhile, Vice President Kamala Harris, joined by Interior Secretary Deb Haaland and Energy Secretary Jennifer Granholm, will go to Arizona to break ground on a new transmission line.

The administration can tap both trips to elevate top priorities on its agenda. Since he came to office, Biden has pushed for fighting global warming and bolstering renewable energy — both of which are backed with billions of dollars in federal funds from his signature legislation, the Bipartisan Infrastructure Law and the Inflation Reduction Act.

Biden lands in Santa Clara County and will then survey the destruction via helicopter in Northern California. For weeks, storms have dumped rain and snow on the area, resulting in flooding and mudslides.

On Wednesday, Biden amended his disaster declaration for the state to boost the level of federal funding to help with disaster recovery. That will help with debris removal and other parts of the emergency response.

More than 500 officials from the Federal Emergency Management Agency and other agencies have deployed to California to help with the response, White House press secretary Karine Jean-Pierre told reporters Wednesday.

The storms that swept through California damaged homes but also helped rebuild the state’s depleted snowpack. That could boost its water supply, which has dwindled during the state’s drought, but extreme heat to come later could melt the snow quickly (Climatewire, Jan. 18).

Meanwhile, Harris heads to Tonopah, Ariz. From there, she will commemorate the groundbreaking of the Ten West Link, a transmission line project that will bring electricity from Arizona into Southern California.

The vice president will be briefed on the project with union workers and deliver remarks on the administration’s push for a clean energy economy. Along with Haaland and Granholm, Ali Zaidi, the national climate adviser, is expected to be in attendance.

The Ten West Link transmission line, approved in 2019 during the Trump administration, is nevertheless a critical component of the Biden administration’s ongoing efforts to expand the power grid, particularly in the West, to handle an influx of new solar, wind and geothermal power projects that also are moving toward the construction phase.

The Interior Department told Congress in a report last spring that it’s on track to approve 48 wind, solar and geothermal energy projects with the capacity to produce an estimated 31,827 MW of electricity — enough to power roughly 9.5 million homes — by the end of the fiscal 2025 budget cycle (Greenwire, April 20, 2022).

Interior at the time also connected the Ten West Link project to BLM’s 2021 approval of the first two large-scale solar power projects in the DRECP — the Arica and Victory Pass photovoltaic solar projects covering 1,300 acres and with a collective capacity to produce up to 465 MW of electricity (E&E News PM, Dec. 21, 2021).