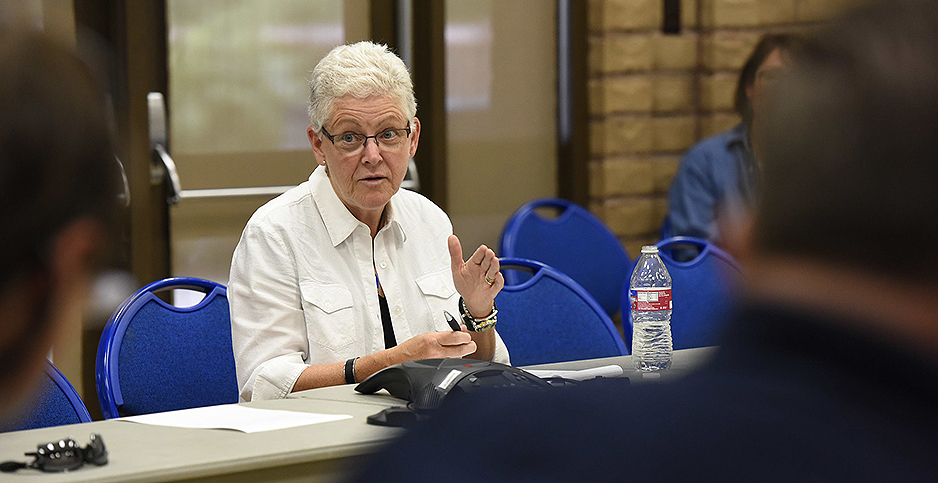 The gaps point to potential sources of liberal conflict next year if Democrats retake control of the federal government. Even so, most greens and activists hailed the policy recommendations as an improvement over Biden’s current plans for global warming.

Biden, the presumptive Democratic presidential nominee, allied with Sanders (I-Vt.) and his supporters in an effort to unify the left after Biden outpaced Sanders in the Democratic primary.

But the task force members — six supporters of Biden and three supporters of Sanders — could not agree on deadlines for ending emissions from big U.S. sources, like transportation or manufacturing.

Nor did they reach a consensus on how much money the federal government should spend on decarbonization, what portion of funds should be earmarked for environmental justice or how many green jobs the government should seek to create.

Other presidential campaigns had set specific targets for some or all of those issues.

Biden campaign staffers guided the task force process, according to one person familiar with its discussions. The source, who asked not to be named in order to speak candidly about private conversations, said the campaign didn’t want to recommend some climate policies without buy-in from groups that didn’t have representation on the task force, such as labor unions.

"There was definitely a lot of pretty heavy hand-holding from the campaign and some of the top Biden surrogates that were more in touch with the vice president and his senior advisers," the person said.

One Biden surrogate, Rep. Conor Lamb (D-Pa.), was added to the task force after its initial formation, according to campaign statements — making it the only group with nine members.

Other Biden-Sanders groups looked at topics such as criminal justice, immigration and health care.

Lamb has a more dovish reputation toward fossil fuels than the other Biden-appointed members, such as Gina McCarthy, the former EPA administrator who now heads the Natural Resources Defense Council, or Florida Rep. Kathy Castor, the chairwoman of the House Select Committee on the Climate Crisis, which last week issued its own climate policy framework with more detailed targets (Greenwire, June 30).

Lamb’s and Biden’s campaigns did not respond to questions about his appointment.

For some problems, the task force issued statements of intention instead of quantifiable commitments. One example was methane. The task force recommended "robust federal standards" and "targeted support" for repairing leaking oil and gas infrastructure, but it didn’t specify what those standards or support might be.

For instance, the first transportation bullet point urges Biden to "immediately convene California, due to its unique authority, and other states with labor, auto industry, and environmental leaders to inform ambitious actions that will enable the United States to lead the way in building a clean, 21st century vehicle fleet and stronger domestic manufacturing base powered by high-wage, union jobs."

Some specific recommendations drew attention to what had been omitted. The task force called for an end to international coal financing — an insufficient goal when "ALL fossil fuel financing — including all oil and gas — must be ended, in the US and globally," Friends of the Earth said.

RL Miller, founder of Climate Hawks Vote and a newly elected member of the Democratic National Committee, said she was unimpressed with several aspects of the plan — particularly its call for installing 500 million solar panels, a holdover from Hillary Clinton’s 2016 climate plan.

Varshini Prakash, co-founder of the Sunrise Movement and a task force member, said the recommendations "move the needle a lot, especially on environmental justice."

Biden’s previous plan called for net-zero emissions by 2050. But he had few intermediate deadlines, besides a goal of cutting building emissions in half by 2035, and no target date for ending electricity emissions. Plans for both are much stronger, Prakash said, and the stage is set for an ambitious clean cars standard.

The task force also brought new ideas to Biden’s campaign, including an equity screen on federal spending and permitting decisions, a White House Office of Climate Mobilization that reports directly to the president, and a "cash for clunkers"-type program to incentivize zero-emissions vehicles.

Many of those ideas came from the presidential campaigns of Sen. Elizabeth Warren (D-Mass.) and Washington Gov. Jay Inslee (D), whose policy staffers since have formed the policy and advocacy group Evergreen Action.

Although the recommendations missed a chance to embrace other Inslee policies — such as a green bank to invest in clean energy — Raad said it nevertheless amounted to a "strong blueprint."

The task force did not mention hydraulic fracturing, which many on the left want to ban. Biden opposed a fracking ban throughout the primary, and the task force operated within that constraint.

That climate framework has become shorthand for government overreach in conservative media, and Biden’s campaign has been wary of alienating moderates and older voters as he looks to defeat Trump.

"Of course, like in any collaborative effort, there are areas of negotiation and compromise," Ocasio-Cortez tweeted after the recommendations were published.

"But I do believe that the Climate Task Force effort meaningfully & substantively improved Biden’s positions."