Biden, in a first, says he opposes all new fracking 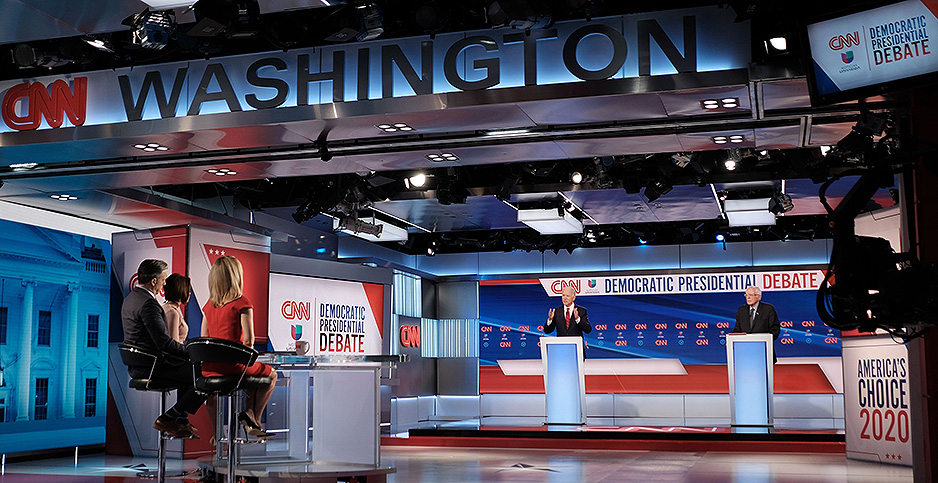 Sen. Bernie Sanders recently suggested he would stay in the presidential race to push Joe Biden to the left.

Last night he seemed to do exactly that.

During a heated debate exchange, the former vice president said he would oppose new hydraulic fracturing projects — a significant escalation for Biden that his campaign quickly reversed.

"No more subsidies for the fossil fuel industry. No more drilling on federal lands. No more drilling, including offshore. No ability for the oil industry to continue to drill — period, [it] ends, number one," Biden said last night during a Democratic presidential debate.

And after another back-and-forth, when Sanders said he was proposing to ban fracking "as soon as we possibly can" to save the planet, Biden responded: "So am I."

The Vermont senator replied: "I’m not sure your proposal does that."

Those moments could resonate through November’s general election. Biden had until now resisted calls for a total fracking ban in favor of a more moderate approach: ending it on public lands while tightening emissions regulations for the industry on private lands.

Biden’s campaign said he misspoke while describing his policy.

Politically, Biden can’t take those words back. They’re already circulating courtesy of President Trump’s reelection campaign and conservative media like The Daily Caller. On policy, a fracking ban has been more of a symbol than a road map; a president has few tools to unilaterally limit it on private land (Energywire, Dec. 6, 2019).

Early reaction seemed tough on Biden from both the left and right.

Taken seriously — if not literally — his statement could alienate union workers whose jobs depend on fossil fuel projects in Pennsylvania and Ohio. That effect could be offset if it also excites the young and liberal voters who have made climate a top election issue.

The question is whether they believe Biden.

"Don’t say you support a fracking ban when you don’t," Rep. Alexandria Ocasio-Cortez (D-N.Y.), a congressional architect of the Green New Deal and a Sanders supporter, wrote on Twitter. "This is basic. The truth matters."

"The fracking process only takes about 3-5 days on average. Opposing ‘new’ fracking is functionally no different than just saying you oppose fracking," said Steve Everley, a managing director at FTI Consulting who works with the oil industry.

"Not an easy sell in the Rust Belt, and puts Dems in blue/purple states (like New Mexico and Colorado) in a tough spot," he wrote on Twitter.

People close to the Trump campaign were more direct.

Biden has made his Rust Belt appeal a major part of his electability pitch. While Sanders and some other candidates proposed a fracking ban, more moderate Democrats worried that supporting such a proposal could cost them politically — just as Hillary Clinton suffered for saying she would "put a lot of coal miners and coal companies out of business."

Clinton was talking about job retraining, but the line became a rallying cry for Trump supporters who painted Democratic energy policy as malicious toward workers. Republicans seemed eager to reprise the attack on Biden.

"You can’t ban fracking right now," Biden said last year in Iowa when a climate activist pressed him on his plan.

"You gotta transition away from it. You’re gonna ban fracking all across America right now, right?" Biden said, putting his hands on the man’s shoulders. "I’d love to, too. I’d love to make sure we can’t use any oil or gas, period. Now. Now."

But when he asked the voter if it was possible, and the voter replied yes, Biden said: "Well, you ought to vote for somebody else."