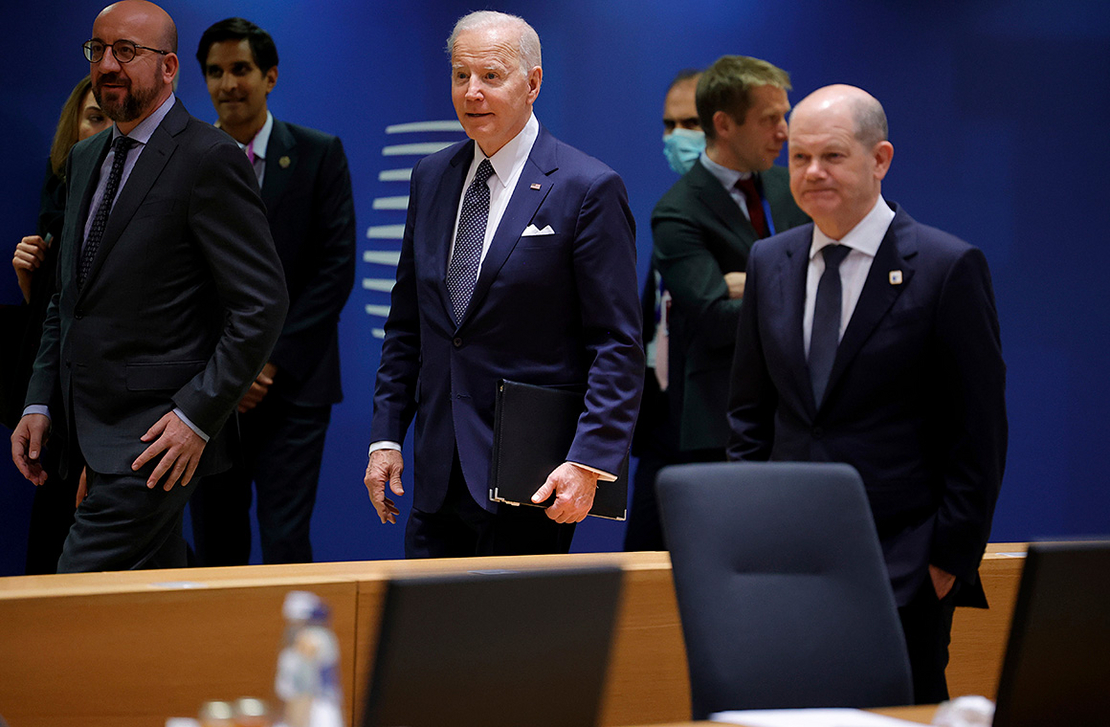 The White House announced this morning that the U.S. will rapidly increase exports of liquefied natural gas to Europe as Germany and other E.U. nations try to diminish their dependence on Russian fossil fuels.

The move will ramp up LNG shipments carried by seagoing tankers by 15 billion cubic meters this year, according to a fact sheet released by the White House. As a comparison, the United States sent 22 bcm of LNG to Europe last year, the highest ever traded between the two continents.

The announcement promises to raise concerns about the trajectory of global climate action. The construction of LNG terminals and other infrastructure could put the U.S. and other nations on a path toward using gas for years to come, even as those countries strive to phase out fossil fuels, advocates warn.

The White House said American exports of LNG will continue to grow through 2030, by which time the U.S. plans to be sending 50 billion cubic meters of gas to Europe annually.

“This build-out will occur in a way that is consistent with, not in conflict with, the net-zero climate goal that we’re shooting for,” Biden said during a meeting with European officials in Brussels this morning. He called the effort a “catalyst” for doubling down on investments in clean energy.

Biden also spoke with European leaders yesterday about ways to accelerate the transition toward clean energy, according to the White House.

In addition to working with other countries to bring new sources of LNG to Europe, the effort announced this morning — which will be overseen by a joint U.S.-E.U. task force — will involve helping the continent reduce demand for natural gas over the next two winters through energy efficiency measures and the build-out of clean energy.

A senior administration official speaking on background to reporters said today’s announcement would help accelerate Europe’s move away from Russian gas. He also said it would advance efforts to phase out gas in the U.S., which has a goal of halving greenhouse gas emissions by 2030.

Energy was a key point of discussion between Biden and other world leaders during urgent talks yesterday about the worsening Russian war in Ukraine.

“Tomorrow, together with President Biden, we will present a new chapter in our energy partnership,” said Ursula von der Leyen, president of the European Commission. “It is about additional LNG from the United States for the European Union, thus replacing the Russian LNG we had so far, an important step forward.”

The European Union receives 40 percent of its gas and more than a quarter of its oil from Russia. Germany, the bloc’s largest economy, relies on Russia for around half of the coal and gas needed to heat homes and power industry.

In a plan announced earlier this month, the E.U. said it would cut its consumption of Russian gas by two-thirds by the end of 2022, mainly by boosting supplies of gas from countries such as Norway, Azerbaijan, the U.S. and Qatar.

The European Commission put forward a proposal Wednesday that would require member states to fill their gas storage facilities to at least 80 percent of capacity by Nov. 1. That will make securing alternative gas sources increasingly important. Europe has recently increased its gas imports from Russia as it attempts to stockpile fuel.

Countries across the 27-member bloc have varying levels of dependence on Russian oil, gas and coal. That has led some countries to resist efforts to abruptly disband Russian imports. German Chancellor Olaf Scholz has warned that Europe’s economy could be thrust into a recession if it acts too quickly.

While the Biden administration has encouraged the E.U. to break its dependence on Russia, officials have also said they recognize the challenge Europe faces.

In addition to his meeting at the European Council, Biden also gathered with leaders from the Group of 7. In a statement, they pledged to support countries as they phase out their reliance on Russian energy imports.

The G-7 also called on oil- and gas-producing countries to increase deliveries to the world market and singled out OPEC as a key part of that effort.

“We will work with them and all partners to ensure stable and sustainable global energy supplies,” the leaders wrote.

The statement also mentioned clean energy but didn’t include specifics, noting only that the crisis brought on by Russia’s war in Ukraine reinforces the G-7’s determination to limit the rise in global temperatures to 1.5 degrees Celsius by accelerating the energy transition.

Increasing LNG supplies to Europe would largely involve redirecting cargoes headed toward other locations, since raising production volumes could take years, according to a note by Goldman Sachs. U.S. terminal capacity is currently maxed out.

While some of that reallocation has already been happening, sustaining it could prove challenging as next winter approaches. Most of the redirected supply has been driven by European gas prices commanding a premium, rather than by policies, Samantha Dart, head of natural gas research at Goldman Sachs, said in an email.

“As a result, we think contracting for some of that flexible supply for the remainder of the year would help support European gas supplies,” she said.

Constructing the infrastructure needed to increase natural gas exports over the long term would take several years, according to analysts. But doing so, in addition to securing long-term supply contracts for natural gas, could lock in years of planet-warming emissions.

U.S. Energy Secretary Jennifer Granholm acknowledged those concerns yesterday during a press conference at the International Energy Agency in Paris.

“But there is also a flipside to this, which is this accelerates the movement away from fossil fuels, at least unabated fossil fuels, and the movement toward technologies that do that,” she said, pointing toward carbon capture and sequestration methods or hydrogen produced with renewable energy.

Those technologies, however, aren’t commercially available.

Currently, there’s not enough infrastructure to transport hydrogen at scale, and it could take years to build it, said Lindsey Walter, deputy director for Third Way’s Climate and Energy Program. In a best-case scenario, hydrogen is still years away from substantially replacing Russian gas in Europe.

“We know the E.U. has some pretty ambitious goals around hydrogen, as it should because it will be crucial for decarbonizing industry, aviation, freight, all of these applications you can’t easily electrify,” she said. “There needs to be some acknowledgment that we don’t produce clean hydrogen at scale yet today.”

Research from Oslo, Norway-based Rystad Energy estimated that Europe would need about 54 million tons of hydrogen by 2030 to replace gas and coal in the continent’s power sector.

“Europe is currently on track to produce 3 million tons of green hydrogen per annum by 2030 so the gap is considerable,” it said.

Green groups are concerned that officials from the U.S. and E.U. are largely focused on increased LNG exports as a response to Russia’s war. The years it will take to develop new fossil fuel export infrastructure would be better used to build clean energy sources, said Mitch Jones, managing director of policy at Food & Water Watch.

“President Biden should firmly reject any plans to fast track gas export terminals here in the United States,” he said in a statement. “Corporate polluters are brazenly seizing on this crisis to secure decades of dependence on dirty energy, which will further devastate frontline communities and abandon any hopes for bold climate action.”