Biden is making the case for deficit spending on climate 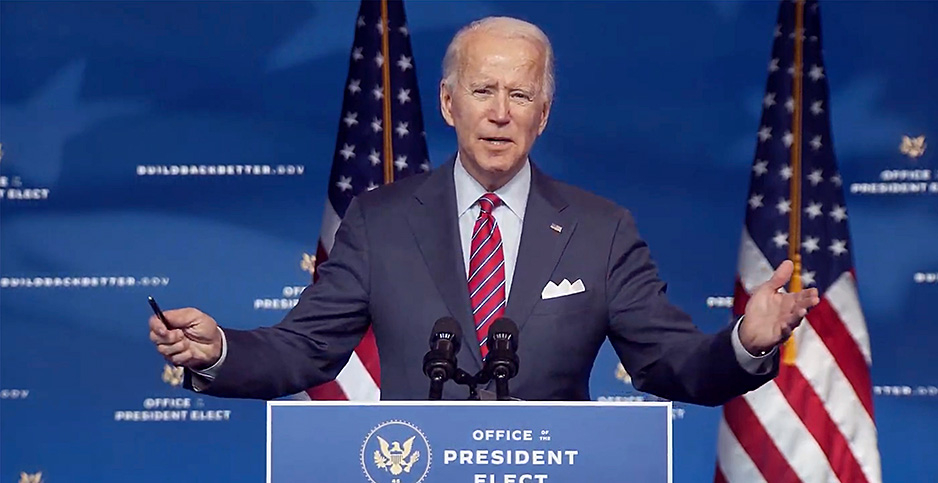 President-elect Joe Biden was unveiling his economic team when he made an off-script remark that could reveal as much about his climate plans as any staffing pick.

The deficit, Biden said, doesn’t matter. At least for the moment.

"You know, the founders were pretty smart. … There’s a reason why all the states and localities have to have a balanced budget, but we’re allowed federally to run a deficit in order to deal with crises and emergencies, as we have in the past," he said Tuesday in a comment that was not written into his prepared speech. He was even more explicit Friday: "By acting now, even with deficit financing, we can add to growth in the near future."

Biden, after spending three decades as one of the Senate’s most deficit-minded Democrats, now is laying the groundwork for an administration that will depend on deficit spending — especially for climate programs.

The core of Biden’s climate plan is $2 trillion to fund clean energy research and infrastructure, smoothing the way for possibly costly regulations while creating tangible projects that Republicans couldn’t easily reverse, like a network of electric vehicle charging stations.

He had planned to pay for it by repealing President Trump’s tax cuts, but Republicans likely have retained enough congressional power to block that. Some conservatives already are pointing to the national debt as a reason to oppose Biden’s plans. The deficit for the past fiscal year hit an all-time high of $3.1 trillion, bringing the total U.S. debt to about $27 trillion.

That means Biden’s climate agenda could depend on how hard he pushes for deficit spending. His administration’s debt posture will influence Democratic lawmakers’ appetite for borrowing. It will shape the contours of public debate on the issue. And it will set the boundaries for negotiations with Senate Republicans.

But virtually all of them have recanted or qualified that stance, and no corner of the Democratic coalition is pushing austerity — a sweeping change from even the Obama administration, which entered the White House in 2009 talking about stimulus offset by budget cuts.

"For all of the stories about internecine conflict amongst Democrats, this is a moment of greater unity … than there’s been in decades," he said.

Paul Bledsoe, a former Clinton White House climate official who is now with the moderate Progressive Policy Institute, said the party has changed its tune because the economic fears of what deficits might bring — inflation and high borrowing costs for everyone — haven’t come to pass, nor have voters punished either party for big spending.

The coming months will test the resilience of that change. COVID-19 relief spending will precede infrastructure, giving Republicans an opportunity to weaponize the record-high deficit.

"This has been going on since the Reagan era. Republicans give huge tax cuts to the rich and then cry austerity when Democrats take over. And we’ve fallen for it twice. We did it under Clinton for sure, and we did it some under Obama," said Bledsoe, who was communications director for the Senate Finance Committee in the early 1990s.

"I hope Democrats have learned a lesson or two from that," he said. "I really think it’s the showdown of the next two years."

Progressives remain vigilant for backsliding; the political left is engaged in pressure campaigns to shut out deficit hawks from the next administration.

Progressive lawmakers and activists are circulating a petition against Biden hiring his former chief of staff Bruce Reed, who was executive director of the Simpson-Bowles deficit reduction commission. Some counted it as a victory that Biden didn’t name Reed to lead the Office of Management and Budget.

Another target is former White House chief of staff Rahm Emanuel, who advocated for keeping the 2009 stimulus — still the largest clean-energy investment in U.S. history — beneath $1 trillion, despite economists calling for more. Biden is considering Emanuel for Transportation secretary.

"There’s sort of a wariness of deficit hysteria coming back," said Sam Ricketts, a co-founder of the progressive climate policy group Evergreen Action.

"We can all only hope that everybody has learned the lessons about how … deficit hysteria has been used and abused, and how frankly unimportant — how quaint — concerns over the federal budget deficit are, versus the other crises we face," he said.

Brian Deese illustrates how onetime deficit hawks have won over some climate hawks.

Named last week as chair of the National Economic Council, Deese faced some activist opposition despite his past role as Obama’s climate adviser. Much of the criticism stemmed from his work for the giant Wall Street firm BlackRock Inc. — but some also keyed in on his budgetary record.

Deese was a top economic adviser to Hillary Clinton’s 2008 presidential campaign, formulating her policies under a rubric of deficit neutrality. In the Obama White House, he advocated "fiscal discipline" — including progressive proposals like eliminating oil subsidies, as well as regressive cuts to programs such as Social Security.

Critics have highlighted Deese’s 2013 confirmation hearing for OMB deputy director, when he said one of his top priorities would be cutting the deficit and outlined ideas to restrict agency spending.

By 2015, though, he was using White House blog posts to decry "mindless austerity." Obama veterans said that was closer to Deese’s true vision, and several notable liberals have come to his defense.

I was in nearly every economic meeting with President Obama from late 2009 to 2015 and I don’t recall ever hearing Brian argue for austerity. He was always pushing for more stimulus, higher taxes on the rich, and creative ways to help the people that needed it the most.

Minimizing Deese’s deficit record cleared the way for climate advocates to highlight other parts of his White House tenure, like helping to negotiate higher fuel standards as part of the 2009 auto industry bailout and his role in sealing the 2015 Paris climate agreement. He also advised Biden on his campaign’s climate plan.

"Brian Deese is great. We should be so lucky to have a climate leader running the NEC," Leah Stokes, a climate policy expert at the University of California, Santa Barbara, wrote on Twitter.

"The climate movement should be careful not to shoot our friends," she said.

A shift in ‘deficit politics’

Yellen serves as a director of the Committee for a Responsible Federal Budget, a self-described "budget watchdog" that works to cut the deficit. In February, she said U.S. debt is "completely unsustainable."

The deficit record of Neera Tanden, Biden’s pick to run the Office of Management and Budget, also has been picked up by her critics on the left.

As president of the Center for American Progress, Tanden supported the Obama administration’s proposal to cut social spending as part of a "grand bargain" with Republicans. Citing "deficit politics," she also privately proposed paying for the U.S. military by expropriating Libyan oil, according to a leaked 2011 email.

Yellen and Tanden also demonstrate how much the past few years have changed deficit politics. Both have called for big government spending in response to the pandemic and economic downturn.

Earlier this year, Yellen singled out climate programs as an example of debt-worthy government investments.

In March, Tanden and Heather Boushey, whom Biden tapped for his Council of Economic Advisers, co-wrote a commentary that said "now is not the time" to worry about federal deficits.

Cecilia Rouse, Biden’s incoming chair of the CEA, and Jared Bernstein, soon to be one of its members, have likewise urged policymakers to massively boost spending.

"I’ve got every indication that the transition team is building an administration to prioritize the confrontation of [climate and other] crises, not a made-up deficit crisis," said Ricketts, who is also a senior fellow at the Center for American Progress.

That’s not to say Biden’s team will ignore deficits. Many do say debt is important. But they distinguish between the limited, if large, stimulus spending Biden has proposed on climate and the ongoing obligations of social programs such as Medicaid.

"Yes, there will be a reckoning [on debt]," Rouse said in March. "But it will be worse if we don’t provide workers and firms with the help they will need to get to the other side of the pandemic."

Bernstein last year told the House Budget Committee that deficits do matter, but policymakers should differentiate between "good debt" — like long-term infrastructure investments or stimulus during a recession — and "bad debt" that’s not productive, such as Trump’s tax cuts.

"Considering the set of unmet needs we observe in communities across the country, along with the threat from climate change, there exists a deep, rich set of [good debt] investment opportunities," he wrote in his testimony.