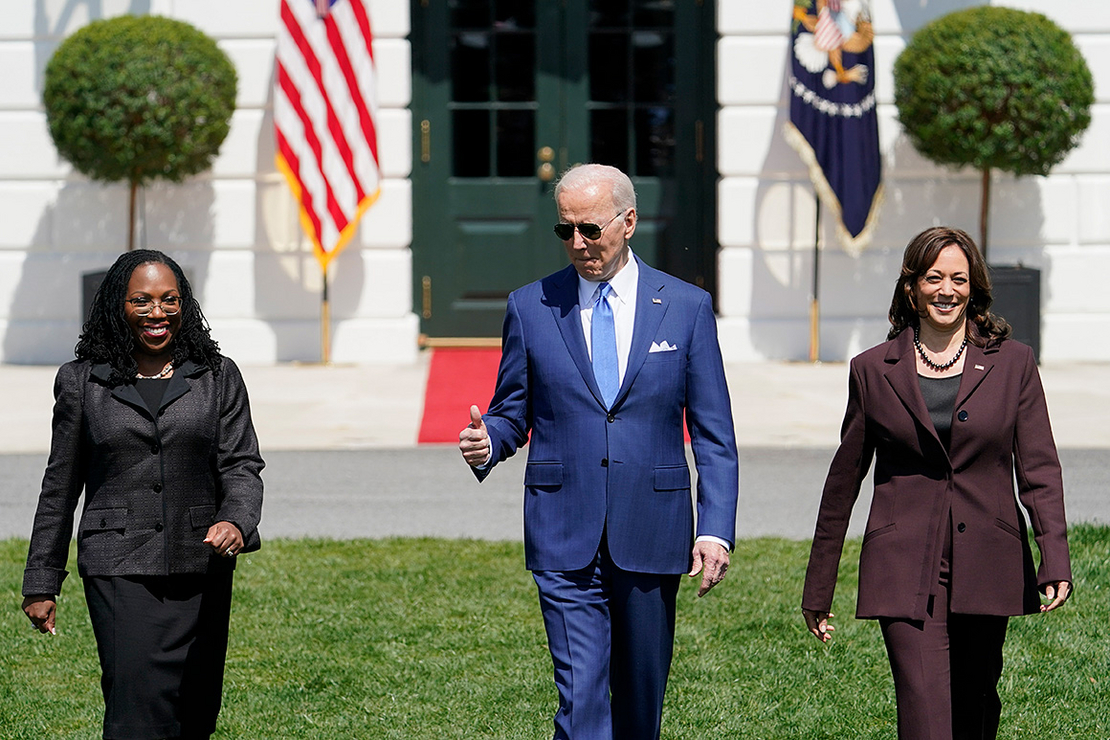 President Joe Biden gives a thumbs-up as he arrives with Judge Ketanji Brown Jackson (left) and Vice President Kamala Harris to speak at an event on the South Lawn of the White House today, celebrating the confirmation of Jackson as the first Black woman to reach the Supreme Court. Andrew Harnik/AP Photo

President Joe Biden lauded the confirmation of Judge Ketanji Brown Jackson to the Supreme Court today at a historic White House event marking the first time a Black woman has been confirmed to the high court.

“We’re gonna look back and see this as a moment of real change in American history,” Biden said today at the event on the White House South Lawn.

Vice President Kamala Harris, the first Black woman to serve as vice president, pointed to the historic nature of Jackson’s appointment. “Judge Jackson, you will inspire generations of leaders,” the vice president said. Young people will “see for the first time four women sitting on that court at one time,” Harris added.

“It has taken 232 years and 115 prior appointments for a Black woman to be selected to serve on the Supreme Court of the United States. But we’ve made it,” Jackson said.

The White House event was packed with government dignitaries, Jackson’s family members and others.

“I bet you never thought you’d get to skip school by spending a day at the White House,” Jackson told her two daughters.

Also in attendance were EPA Administrator Michael Regan and Energy Secretary Jennifer Granholm, according to a White House pool report.

“Madam Justice!” Granholm tweeted yesterday. “Despite the division and anger out there, soon-to-be Justice Jackson makes me so hopeful, so happy for America, for representation, for justice. Let’s pause to be joyful for this arc-of-justice bending chapter in our history. Movement is possible!” she wrote.

Regan tweeted a picture of Biden with Jackson as the Senate confirmation vote was taking place. “History made. Judge Jackson will be an exceptional Supreme Court Justice,” Regan wrote.

The Senate confirmed Jackson yesterday by a 53-47 bipartisan vote, with Republican Sens. Lisa Murkowski of Alaska, Susan Collins of Maine and Mitt Romney of Utah breaking ranks with their party to support the nomination.

Biden thanked those Republicans today, saying “they deserve enormous credit” for setting aside partisanship with their votes. The president also criticized Republicans for what he called “vile, baseless” attacks against Jackson during her confirmation process.

“It is the greatest honor of my life to be here with you at this moment,” Jackson told Biden at the event.