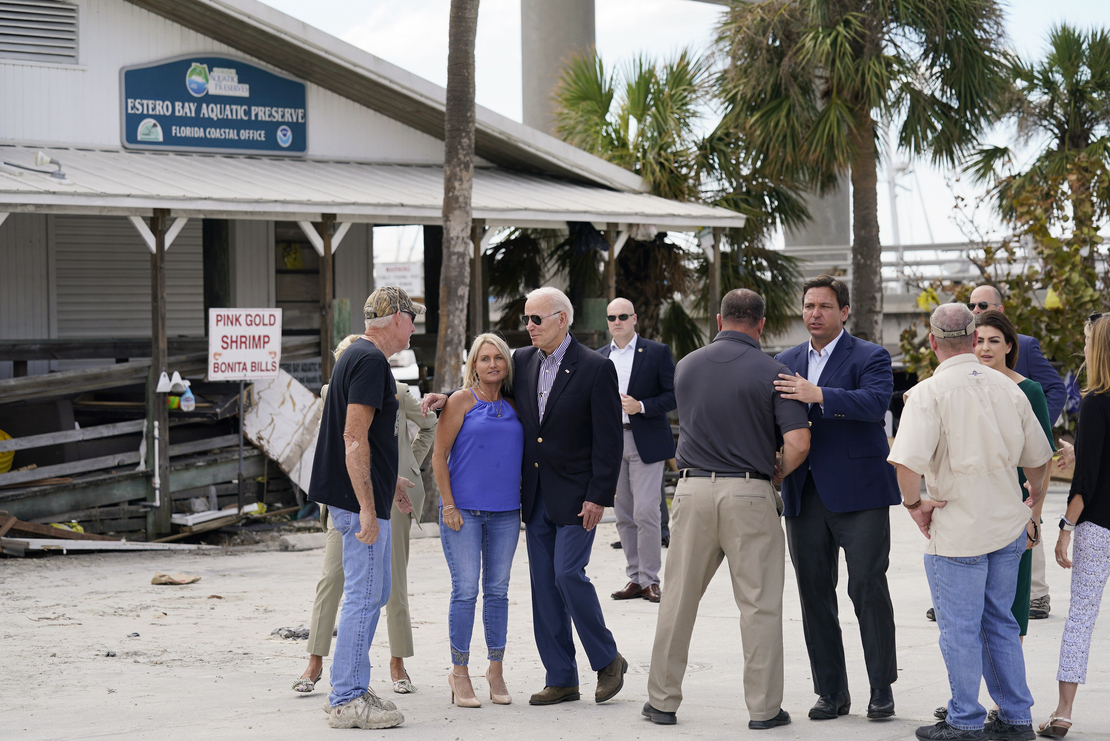 President Joe Biden toured the devastation from Hurricane Ian and met with some of his top political rivals during a stop in Fort Myers, Fla., on Wednesday.

The president and first lady Jill Biden took an aerial tour of the region and met with Florida officials as the administration touted its commitment to helping the state recover from the hurricane that obliterated homes, businesses and communities.

“Today we have one job, and only one job, and that’s to make sure the people of Florida get everything that they need to fully recover,” Biden said in a speech following his tour of the state.

Florida Gov. Ron DeSantis (R) and his wife, Casey DeSantis, shook hands with the Bidens ahead of a briefing on hurricane recovery efforts. Biden and Ron DeSantis — a possible 2024 presidential contender and one of Biden’s top GOP critics — have stressed the need to put aside partisanship in the wake of the hurricane.

DeSantis introduced the president ahead of Biden’s speech, lauding the president’s response effort. “We appreciate the team effort,” DeSantis said of the cooperation among state and federal officials.

Biden thanked DeSantis and the Florida first lady for their hospitality welcoming him to the state.

“And I think the one thing this has finally ended is a discussion about whether or not there’s climate change and we should do something about it,” Biden said in his speech.

Florida’s two Republican senators, Rick Scott and Marco Rubio, also attended the briefing with Biden and other state and federal officials. Scott is leading Senate Republicans’ efforts to take control of the chamber this fall; Rubio has been another leading critic of Biden’s presidency.

Scott on Wednesday urged Senate Majority Leader Chuck Schumer (D-N.Y.) to reconvene the Senate to pass a supplemental Ian aid package, but that’s unlikely, since lawmakers are on recess ahead of the midterm election, POLITICO reported. Both Scott and Rubio have asked for additional federal funding to respond to the hurricane.

With recovery efforts still underway, the White House announced plans Wednesday to increase federal disaster aid to impacted regions by doubling the amount of time — from 30 days to 60 — that the federal government will pick up the costs of emergency measures including search and rescue, shelter, and feeding operations.

FEMA Administrator Deanne Criswell, who joined Biden in Florida on Wednesday, predicted a costly recovery ahead.

The response efforts are “still very much in the lifesaving and stabilization mode,” she told reporters aboard Air Force One en route to Florida. “They are just beginning the assessments of what the actual extent of damage is to the infrastructure.”

The total cost to the federal government is “going to be in the billions,” she added. “How many billions? I don’t know yet. But it will certainly be in the billions, and perhaps one of the more costly disasters that we’ve seen in many years.”