Biden Labor Dept. could be ‘linchpin’ in climate fight 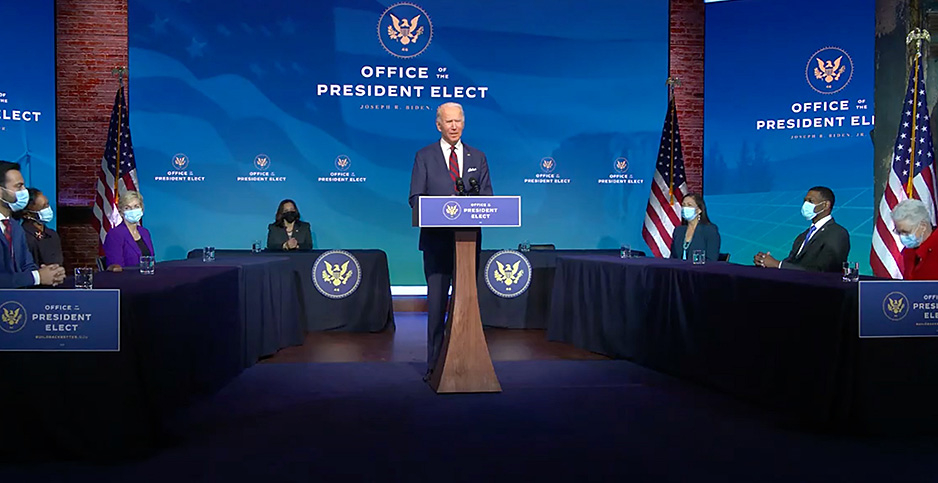 President-elect Joe Biden introduced his climate team Saturday. He has signaled that his administration will take a whole-of-government approach to addressing climate change. SplashNews/Newscom

The Department of Labor under President-elect Joe Biden could play a major role in shaping the U.S. fight against global warming, experts say, including the extent to which American workers are protected from mounting climate impacts.

While on the campaign trail, Biden pledged to launch a national jobs-focused effort that would create "modern, sustainable infrastructure now and deliver an equitable clean energy future." That commitment included $2 trillion in investments to empower workers, organize unions and rebuild the middle class — while also forging a climate-conscious path forward.

Biden also has promised to take a whole-of-government approach to global warming — marshaling agencies from Labor to EPA — and on Saturday, he introduced key members of his environmental team.

"We literally have no time to waste," Biden told reporters.

The approach is a shift from Donald Trump’s presidency, which has been marked by efforts to boost oil and gas production while rolling back government efforts intended to safeguard the environment. The incoming Biden team will try to undo or block many of the current administration’s initiatives.

Advocates say the Labor Department — led by a yet-unnamed Biden nominee — will be integral to achieving Biden’s goals of fighting climate change and protecting the U.S. economy — while also ensuring that workers in planet-warming industries aren’t left behind.

"The case we have been making to the transition team is the need for an effort that … [helps] workers maximize the gain in this clean energy transformation, but also minimize the pain," said Jason Walsh, executive director of the BlueGreen Alliance, which unites labor unions and environmental groups.

Sen. Bernie Sanders (I-Vt.) has reportedly vied for the job, as well, but his hard-line views and Republicans’ potential majority in the Senate could make his nomination less likely.

Levin, who calls himself an environmentalist and is a clean energy entrepreneur, currently sits on the House Education and Labor Committee. Prior to joining Congress, he was a longtime union organizer and served as the acting director of the Michigan Department of Energy and as Michigan’s first-ever chief workforce officer.

He’s also the latest elected official to emerge from the Levin political dynasty of Michigan. Both his father and uncle served in Congress.

Earlier this month, the lawmaker introduced two bills that would require financial advisers and institutions to consider the impacts that sustainability issues — climate change among them — could have on retirement investment plans (E&E Daily, Dec. 15).

Neither the BlueGreen Alliance nor the Labor Network for Sustainability (LNS) endorses candidates for Cabinet positions. But in a personal capacity, leaders of both organizations said Levin would be especially well prepared to tackle climate issues from DOL’s top perch.

"He is somebody who is aware of just transition issues and who has spoken about them," said LNS co-founder Jeremy Brecher. "I don’t know how widely that would be true for others."

Walsh, for his part, has a record with labor organizing and on climate issues. Before becoming Boston’s mayor in 2014, he for several years led the city’s Building and Construction Trades Council, an umbrella group of 20 local construction unions. And in November, Walsh was named chair of Climate Mayors, a group of 468 U.S. mayors committed to upholding the Paris Agreement.

Su’s career largely has revolved around labor issues and vulnerable communities in California. Before becoming the state’s labor secretary, she served as the California labor commissioner and as litigation director at Asian Americans Advancing Justice-Los Angeles, a civil rights organization.

On climate, Su wrote an op-ed in the Lompoc Record newspaper expressing support for California’s requirements for zero-emissions vehicles because of their potential to create thousands of "high-quality, well-paying jobs in manufacturing, green energy technology and related changes in how we live and move."

Finkenauer is also in the running, Reuters reported in late November. At 31, the lawmaker from Iowa is one of the youngest women in Congress. She recently lost her bid for reelection, but during her first term, she sat on the House Transportation and Infrastructure Subcommittee on Water Resources and Environment and the Small Business Subcommittee on Innovation and Workforce Development.

Gaspard, who served as White House political director in the Obama administration, last week announced he is stepping down as president of George Soros’ Open Society Foundations. He likewise has deep roots in the labor movement, including as vice president of the Service Employees International Union (SEIU).

In April, the Open Society Foundations under Gaspard pledged $16 million to combat COVID-19 and climate change. In a statement, Gaspard said the money would be used to support the needs of "low-wage workers and frontline communities" and back "those taking bold steps toward a just and sustainable future."

Several of the candidates have personal and professional ties to Biden, and nearly all of them have been publicly backed by major players in the labor movement.

Multiple sources interviewed for this story said the entire slate of potential candidates would be well prepared to take on the role, which will require advocating for American workers amid both the coronavirus pandemic and the shifting energy economy.

"Whoever the secretary is, they should be ready to ensure that the jobs created by green infrastructure projects are good, high-paying union jobs and address the needs of communities of color who are most impacted so that no workers, families or communities are left behind," said Mary Kay Henry, the international president of the SEIU.

There is a general consensus that regardless of the eventual nominee, Biden will insist that climate action is a top priority.

But supporting unions and workers also is expected to be critical to the next administration.

"President-elect Biden has made it clear that he thinks workers in high-quality union jobs should be at the center of our climate solutions," said Jason Walsh of the BlueGreen Alliance.

Walsh noted that the Biden campaign’s infrastructure and energy plan mentions the word "union" more frequently than the word "climate." He’s not wrong; "union" appears 32 times in the document, while "climate" appears 28 times.

Biden affirmed Walsh’s point last Thursday. The incoming president wrote on Twitter that when he thinks about climate change, he thinks about jobs: "Good-paying, union jobs that put Americans to work, make our air cleaner, and rebuild America’s crumbling infrastructure."

When I think of climate change, I think about jobs. Good-paying, union jobs that put Americans to work, make our air cleaner, and rebuild America’s crumbling infrastructure.

There are a variety of ways a climate-conscious Labor Department could help curb global warming and its impacts on the workforce.

The very first order of business, however, likely will be developing mandatory standards to address the health and safety workplace hazards posed by the coronavirus pandemic, said Elizabeth Bunn, who worked with the United Auto Workers for two decades and served as the AFL-CIO’s national organizing director between 2010 and 2017.

But not too long after that, Bunn added, the Occupational Safety and Health Administration under the Labor Department will need to address workers’ vulnerabilities to climate-related threats. That would entail investigating climate risks such as extreme heat exposure and developing protective standards so workers are safe on the job.

"President Biden’s secretary of Labor should allow investors to appropriately consider climate and other factors in their investment decisions," said Smith, who sits on the Senate Health, Education, Labor and Pensions Committee.

Perhaps most important will be the agency’s role in ensuring that the U.S. transition to a low-carbon economy does not devastate people whose livelihoods depend on planet-warming industries.

"There are tens of thousands of workers who work in fossil fuel and related industries. Not uniformly, but in good part, those have historically been good jobs, by which I mean unionized, good wage and benefits, retirement security, and so on," said Bunn, who is currently the national policy director at the Labor Network for Sustainability.

"One of the goals that we would hope to see from the Biden DOL would be managing that transition [so] that it is just," Bunn added.

Those efforts could take the shape of creating wage replacement programs and providing protection for workers’ health care and retirement security by extending those benefits into the future. It could also mean providing job training opportunities for people who need to move into new careers or industries, and additional education where appropriate.

It is also crucial, sources said, that the Labor Department go beyond individual workers and address the needs of entire communities. The closure of a coal-fired power plant in a small town, for instance, has the potential to erode the area’s tax base, including by affecting small businesses that rely on the nearby energy industry.

The Labor Department could play a key role in facilitating rapid response teams that go into fossil fuel-dependent jurisdictions to forge economic development plans to make up for lost revenue, said Brecher, of the Labor Network for Sustainability.

And when it comes to jobs that will be added because of the energy transition — rather than lost — the Labor Department can help by building in worker protections and competitive wages, and by advocating for employee-friendly labor agreements, experts said. That could help ensure that a boom in green jobs does not result in companies paying workers less or misclassifying them as independent contractors.

In the eyes of Joe Uehlein, the president of the Labor Network for Sustainability, transitioning the workforce alongside the economy is "the biggest thing holding us back on climate."

"As a nation, we’ve never dealt with transitions adequately — or at all," he said. "So working people are rightfully suspect, and until we have programs in place that assure them a smooth path to something else, they’re going to fight against climate policies because they view them as taking their jobs."