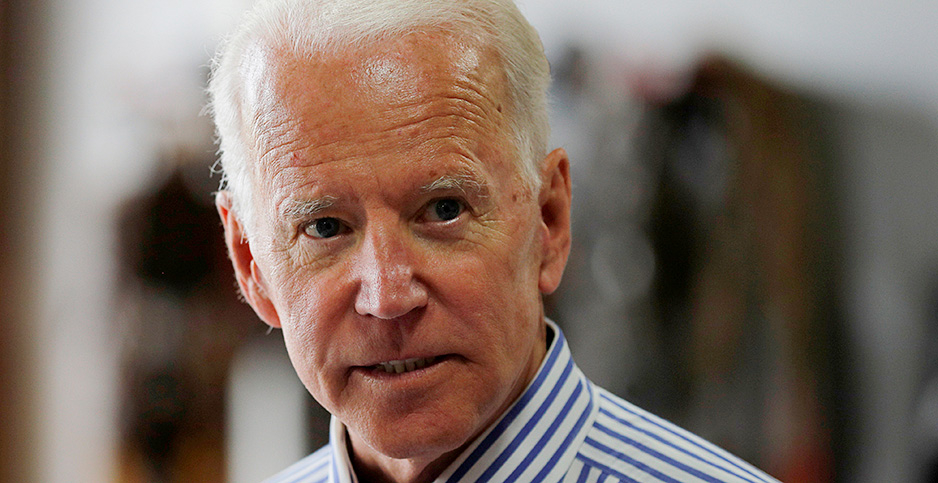 President Biden is nearing the end of his first 100 days in office, and he's proposed an energy overhaul while in the White House. Brian Snyder/REUTERS/Newscom

In his first 100 days in office, President Biden has proposed an unprecedented peacetime restructuring of two industries central to American life: electric power and the automobile.

Nearly a century after President Franklin Roosevelt pushed through legislation in record time to drag the country out of the Great Depression, Biden faces a nation in crisis again: more than a half million American lives lost to a pandemic, permanent job losses, a racial reckoning and the escalating effects of climate change.

FDR wanted to electrify rural America in 1933 to help lift people from crushing poverty. Biden entered the White House after a cataclysm of natural disasters in 2020, and he pledged last week to put the United States on a path to deep reductions in carbon emissions from power plants and cars.

But the opening chapter of Biden’s presidency has underscored the sharp limits of his authority. On the path to carbon-free electricity and electric cars, Biden faces bitter divisions on Capitol Hill, where anything resembling the mammoth engineering challenge of decarbonizing the U.S. economy would have to pass.

Near the end of Biden’s first 100 days, there remains no way to know whether the president will get the tool he really wants and needs for his climate plan — a national clean energy standard, or CES, that would achieve a 100% carbon-free electric grid by 2035 and would go economywide by 2050.

The plan is widely expected to be a schedule of steadily tightening limits on carbon dioxide emissions from coal- and natural gas-burning generators. It would be applied to utilities purchasing electricity for their customers and would be backed by federal payments and penalties.

Getting to a decarbonized electric grid in 2035 has been a political journey for Biden, a moderate over a 40-year career in public service. Yet it was a target Biden seemed to embrace more readily the closer he got to the White House. Democrats on the House Select Committee on the Climate Crisis in June issued a blueprint that called for ridding the power grid of carbon emissions by 2040. Biden moved up the deadline to 2035 last summer as he sought to lock in support from progressives before the Democratic National Convention.

Now, Biden’s $2.3 trillion infrastructure proposal not only would set the electricity standard, but would inject billions of dollars into electric transmission lines and electrifying vehicle fleets. It would build on and speed up timetables already set down by major power producers and some states.

He aimed to answer the questions on everyone’s mind: Can Biden’s enormous policy ambitions stick? After the presidency of Donald Trump, can the United States reclaim a leadership role as the world looks for ways to cut carbon emissions?

"I’ll tell you why this will stick — because trillions of dollars are going to be spent and invested all around the world," Kerry said. "That money that is being invested, no politician could come along and undo what is going to happen in the transformation of our economies."

Energy Secretary Jennifer Granholm has talked about the political challenge of decarbonizing the electricity sector in terms of carrots and sticks. For states not inclined to come along with a federal mandate, "carrots sometimes make states go a long way," she said this month.

The United States’ return to the Paris climate accord and a burst of executive actions early in Biden’s first 100 days set the stage for the infrastructure proposal.

The Biden program sets research and development goals that would make clean energy the cheapest option for consumers by 2030, including reducing the cost of utility-scale solar farms by 60%; lowering the cost of hydrogen, a zero-carbon fuel, by 80%; and cutting prices of electric vehicles in half. It also includes the deployment of 30 gigawatts of offshore wind by 2030.

"Adding up the clean energy, climate and environmental policies in the first relief package, the American Jobs Plan and the pledges made at the recent climate summit, you have by far the most far-reaching climate actions ever proposed by a president," said Peter Fox-Penner, director of Boston University’s Institute for Sustainable Energy.

On paper, the shrinking greenhouse gas emissions would put the United States on course to fulfill its obligations under the Paris Agreement by cutting economywide carbon emissions by 50% from 2005 levels by 2030.

Coupled with the replacement of gasoline and diesel vehicles by battery-powered models, the combination would achieve a large majority of the carbon reductions required for the ultimate goal, a net-zero carbon emissions economy by midcentury.

The enormousness of the challenge matches the urgency of the climate threat, according to Biden. But a National Academies of Sciences, Engineering and Medicine report said the scale of grid transformation Biden wants is "technologically feasible," but only "on the edge of feasibility."

Today, two-thirds of the nation’s electric power still comes from fossil fuel-burning plants, and around 12% comes from wind farms and utility-scale solar installations. Biden’s target would require a reversal of those numbers in 15 years, with carbon emissions from a small amount of backup natural gas generation captured and stored through a complex infrastructure that does not exist today, or other strategies.

DOE’s Lawrence Berkeley National Laboratory has estimated that achieving a carbon-free grid could require 1,100 GW of new wind and solar capacity, with a rate of new installations that would be double the best year ever to date. Such an acceleration "may be feasible," according to the lab’s guarded outlook.

An extensive computer modeling of the clean energy challenge by researchers at Princeton University in January concluded that ramping up to Biden’s 2050 goal would require a whiplash acceleration of technology deployment. By 2030, purchases of electric cars would have to reach 50 million, with installation of 3 million public charging ports. Wind and solar generation would have to increase total capacity fourfold — around 600 GW. And a 60% expansion of high voltage transmission networks would be required.

Ernest Moniz, President Obama’s second-term secretary of Energy, called the 2035 goal "really, really tough," adding, "I’m not going to write it off, if, and probably only if, this decade is the supercharged innovation decade."

Electric vehicle models account for less than 2% of U.S. motor vehicles, and the leap Biden calls for needs continued innovation to bring EV sticker prices on par with those of conventional vehicles without subsidies.

Beyond cost parity, an entire supply chain and charging network also must be built. "That’s a lot of pieces to move quickly," Barry Rabe, a professor of environmental policy at the University of Michigan, told E&E News (Climatewire, April 15).

The Environmental Defense Fund offered a more confident outlook for the Biden clean energy plan. The Biden target "is not only feasible," EDF policy analysts said, but "multiple policy pathways exist for meeting it."

Rob Gramlich, executive director of Americans for a Clean Energy Grid, said the size of the long-term challenge should not handcuff the effort.

Biden is not starting at the bottom. With each shock of extreme weather, public support for climate action increases, according to national polls. The Pew Research Center last year reported that two-thirds of Americans want the federal government to do more on climate, with sizable majorities favoring tighter restrictions on power plant emissions, tougher fuel efficiency standards for vehicles, and tax support for capturing and burying CO2 from power plants. Two-thirds of Republicans surveyed favored tightening power plant emissions, Pew found.

Eight states, the District of Columbia and Puerto Rico have passed laws requiring reaching 100% carbon-free electricity, and another six states have done so with targets or executive actions. They are allied with over 200 cities and counties with clean power goals.

Governors of a dozen states have urged Biden to step up the transition to electric vehicles by phasing out new sales of gas- and diesel-powered cars and light trucks by 2035.

Eighteen of the largest U.S. utilities, whose service areas run through a majority of the states, have adopted zero-carbon goals, according to the Edison Electric Institute’s tally.

"They haven’t put their heads in the sand, and they have been waiting for a partner in government to help them move toward those goals," said Rep. Kathy Castor (D-Fla.), chairwoman of the House Select Committee on the Climate Crisis.

Castor noted that the House is nearly unified behind Biden on climate, but said she is "very cognizant" that Senate Democrats only have a slim majority, and that a number of members are uneasy about some of Biden’s climate change plans.

Granholm, too, said the administration is looking hard at a way to structure the clean energy standard so that it could be cleared by the Senate parliamentarian and included as part of a second budget reconciliation bill in the Senate this year. That route requires only 51 votes for Senate approval, not 60, assuming current filibuster rules remain in force.

But public polling and power industry support have not turned red states blue, or altered congressional Republicans’ opposition and skepticism toward what Biden is after. Of the 20 states with the highest carbon emissions, 17 have no clean electricity target, according to a report by the Evergreen Collaborative and Data for Progress, groups pushing for a clean energy standard.

Of the 18 states that have clean energy mandates or goals, 14 have set goals for 2045 or 2050, a decade or more later than Biden has charted.

Nicolas Loris, a research fellow at the conservative Heritage Foundation, warned that there is a "reinvigorated push" by red-state lawmakers and governors to push back against policies perceived as federal overreach.

GOP-led states that have not adopted statewide clean energy standards "are going to have the most knee-jerk reactions to some of these actions at the federal level," he said. "The more that we have federal intervention into some of these decisions, the more complicated it gets."

Some of those potential obstacles are already emerging. West Virginia Attorney General Patrick Morrisey (R), who took the Obama-era EPA rule meant to curb power-sector carbon emissions to the Supreme Court, is already calling Biden’s goal to cut greenhouse gas emissions in half by 2030 a "domestic and foreign policy blunder of almost unfathomable proportions." He’s pledged to "stand ready to defend West Virginia’s and America’s interests and the rule of law."

Biden has started to deliver on his promise of a "whole of government" commitment to advancing climate goals, Loris added. The infrastructure proposal reflects the efforts on energy and climate, he noted, and Biden has successfully filled his Cabinet and sub-Cabinet positions with climate hawks.

Leah Stokes, an assistant professor of political science at the University of California, Santa Barbara, and co-author of the Evergreen report, predicted that a clean energy standard could satisfy the requirements of budgetary reconciliation, the procedural maneuver Democrats are eyeing to pass Biden’s infrastructure plan. Revenue and expenditures are a critical component of a CES.

"If utilities hit 80% [zero-carbon generation] by 2030, they receive revenue from the federal government to defray costs. If they fail, they would pay penalties to the federal government," Stokes said, describing the details she expects to see in legislative language creating a clean energy standard.

But even the reconciliation strategy will fail if Republicans are united in opposition, as they now appear, and if coal-state champion Sen. Joe Manchin (D-W.Va.) doesn’t come aboard. Manchin indicated that he could be open to a CES if it were done "in a way that you don’t create one vast economic depression on the price of coal."

Biden is a relative newcomer to clean energy advocacy, but he has a long history of reaching compromise with warring parties in Congress.

At least for now, that is his top climate goal.