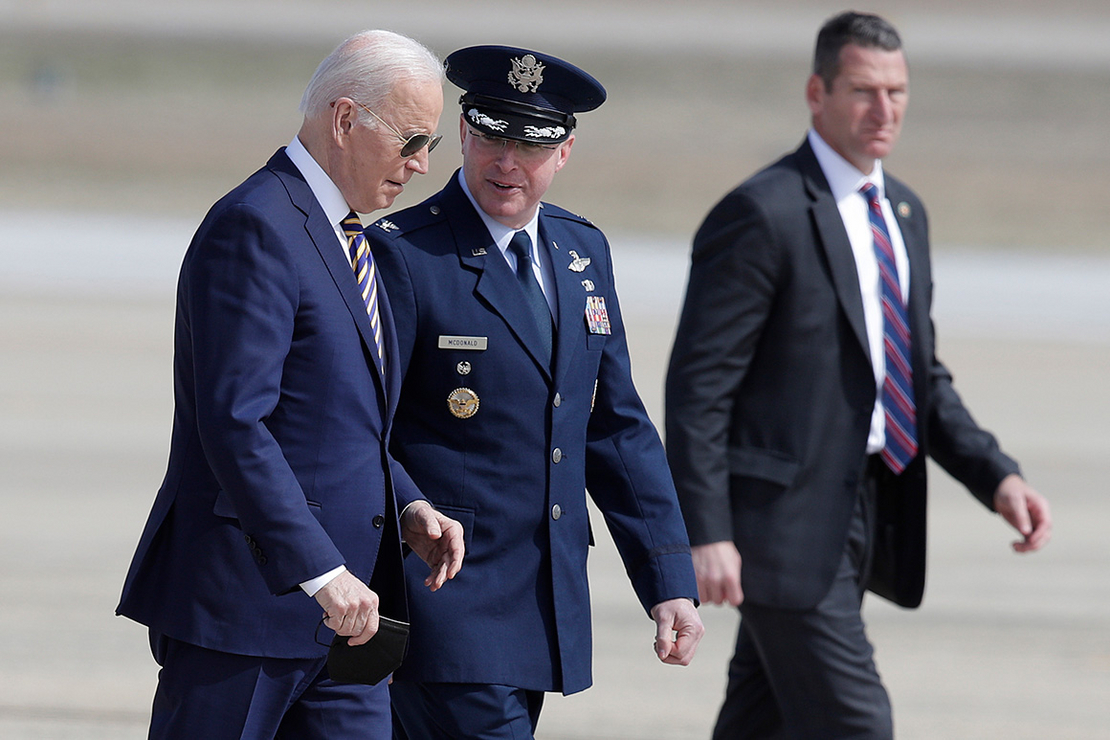 “This crisis is a stark reminder that to protect our economy over the long term, we need to become energy independent,” Biden said. “It should motivate us to accelerate a transition to clean energy.”

Biden pushed back against assertions by Republican lawmakers and Sen. Joe Manchin (D-W.Va.) that U.S. goals to decarbonize the energy sector has slowed oil and gas production. Republicans have pointed to the invasion of Ukraine as a reason for deregulating energy production and prioritizing fossil fuels over renewable energy.

With Republicans almost uniformly rejecting new clean energy spending as a response to Russia’s invasion, this crisis promises to further polarize energy politics — a development that once seemed hard to imagine for an issue that already divides the parties bitterly.

Rep. Fred Upton (R-Mich.), a former chairman of the Energy and Commerce Committee, said Biden’s climate agenda had “emboldened” Russia to invade because its major share of the global oil market remained unchallenged. And Upton scolded Democrats for holding a hearing on electric vehicles.

“With the global energy crisis and the war on Ukraine right in front of us, why are we holding a hearing on electric vehicles?” he said yesterday, equating “energy independence” with expanding oil drilling rather than lowering oil demand.

“We must immediately surge U.S. oil and gas production and send the unmistakable signal that America — not Iran or Venezuela or Saudi Arabia — will step in to replace Russian energy that is taken off the market.”

Indeed, even as Biden said U.S. clean energy would counter the influence of Putin, his administration called on U.S. energy companies to ramp up domestic oil and gas production.

”As major energy company leaders have themselves said, they have the resources and the incentives they need to further increase production in the U.S.” a senior administration official said on a call with reporters.

That short-term response, the official said, pairs with a long-term goal to “speed up, not slow down, our transition to a clean energy future.”

“The only way to eliminate Putin’s and every other producing country’s ability to use oil as an economic weapon is to reduce our dependency on oil,” the official said.

Environmental groups welcomed Biden’s new claims — while outlining the case for him to go even harder.

“The truth is we can’t drill our way out of high gas prices,” Gene Karpinski, president of the League of Conservation Voters, said in a statement.

“The only real solution to high, unreliable energy costs is investing in clean, renewable energy and technologies,” he added, calling for Congress to pass Biden’s stalled climate legislation.

“If Biden sides with fossil fuel executives who are capitalizing on instability, war, and mass suffering, there will be irreversible ramifications that would undermine any chance of him achieving his climate goals,” Sunrise Executive Director Varshini Prakash said in a statement.

“But if Biden ushers in a new era of renewable energy, he could be the President that finally declares independence from fossil fuel tyrants and authoritarian petrostates,” she said, calling on him to use this moment to revive talks on Democratic climate legislation.

Rees said he’s hopeful that Biden’s comments yesterday signal a new direction for the president, where he’ll stop deferring to Congress on climate and instead use his executive power to create change.

“It’s definitely a welcome shift in tone,” he said. “But there’s so much Biden could be doing at the executive level, and I think this is maybe the start of an embrace there, but the question is whether it’s going to continue.”

Even as Biden portrayed climate policy as another weapon against Russian aggression, a senior administration official called on U.S. oil and gas producers to “step up” and ramp up domestic production.

“We need to protect American consumers and allied countries, including through greater U.S. domestic production,” a senior White House official told reporters in a briefing yesterday. “This crisis reinforces our resolve to make America truly energy independent, which means reducing our dependence on fossil fuels.”

The European Union, which gets 40 percent of its gas from Russia, announced a similar, albeit less aggressive plan to stop Russian energy imports. The E.U. pledged to cut its Russian gas imports two-thirds by the end of the year. Some of that will likely be replaced by U.S. liquefied natural gas, delivered through two LNG terminals proposed in Germany last week.

As the crisis in Ukraine deepens, Republicans have either disregarded clean energy or attacked it as part of the problem.

”It is inexcusable for us to be doubling and tripling down on the failed energy strategies of California, in the European Union and others that have tried to mindlessly migrate toward these renewable energy strategies without a cohesive plan,” said Rep. Garret Graves (R-La.), the ranking member on the House Select Committee on the Climate Crisis.

In the Senate, Republicans said Biden’s move away from Russian oil imports was too little, too late.

“I think we’re all in favor of trying to come up with solutions to energy problems that are cleaner and more efficient and reduce greenhouse gas emissions,” Sen. John Thune (R-S.D.) said yesterday.

“But for the foreseeable future, we’re going to need liquid fuels,” he added, urging Biden to open more public lands to drilling and to approve more pipelines to ease distribution bottlenecks.

“These are all American solutions to this challenge, and something this administration can change in terms of their mentality, their policy, their decisions. And they can do it overnight,” Thune said.