Biden made the world a bold promise. Here’s Congress’ role 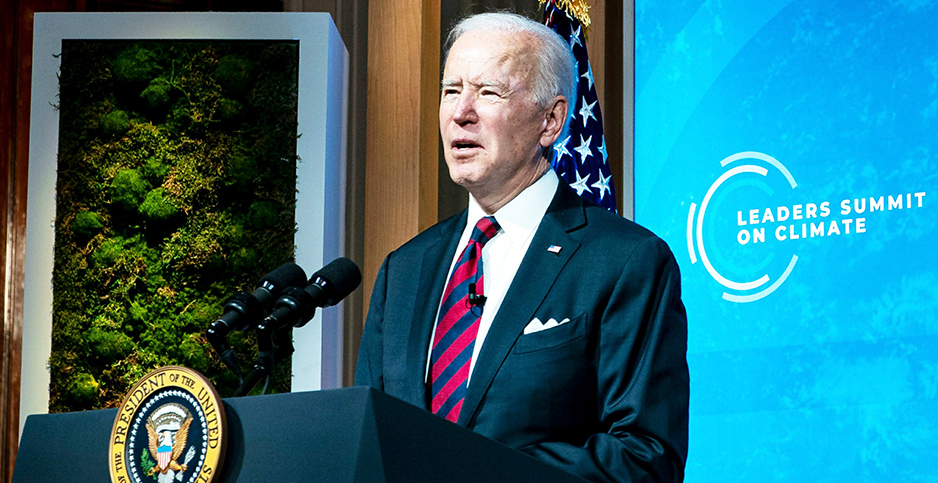 The emissions pledge President Biden made yesterday could take a herculean effort from Congress, but the path to economywide climate legislation remains murky, despite early infrastructure talks on Capitol Hill.

On the first day of its international Earth Day summit, the Biden administration announced a new nationally determined contribution under the Paris Agreement to slash U.S. greenhouse gas emissions 50% to 52% by 2030 compared with 2005 levels.

The drastic cut is among the world’s most ambitious promises. And it prompted other big emitters to ramp up their ambitions this week. For the U.S. pledge to stick, Biden will likely need Congress.

While congressional Democrats have stacked up climate plans and bills targeting the fossil fuel industry since they won back the House in 2018, Republicans are already providing significant political headwinds, and it’s not clear they have a realistic path to punch that big a hole in the nation’s planet-warming emissions.

"What it has to happen is results," Sen. Ben Cardin (D-Md.) said yesterday. "You’ve got to be able to achieve what you say you’re going to achieve."

For the next few months, Democrats say their eyes are on a potential infrastructure bill, widely seen as a vehicle for climate legislation.

The Biden administration’s $2 trillion proposal outlined an array of policies to invest in electric vehicles, the grid and clean energy, but the ambition of the 50% by 2030 target is staggering.

U.S. greenhouse gas emissions were 21% below 2005 levels in 2020, reflecting the economic downturn that came with COVID-19 and a larger downward trend as the power sector moves toward renewables and natural gas, according to a preliminary analysis from the Rhodium Group.

That leaves a huge gap to fill for the next decade, particularly with emissions expected to rebound as the economy recovers this year.

To hit the target, renewable power would have to quadruple and natural gas power plants would need carbon capture and storage by 2025, according to an analysis based on an array of academic research published yesterday by the University of Maryland’s Center for Global Sustainability.

New buildings would also have to be 100% electric, while electric vehicles would have to make up 65% of new consumer sales by 2030, up from around 2% today.

It’s not evident that kind of change can be achieved through an infrastructure bill alone, but House Speaker Nancy Pelosi (D-Calif.) yesterday said it would be the starting point.

Still, she acknowledged that infrastructure is "not the only thing" Congress needs to do. "I am not saying we can do it without [infrastructure]," Pelosi told reporters. "But there are different approaches to it."

"The keys are going to be which parts of the infrastructure package also open up private capital," Casten said in an interview. "The scale of what needs to be invested is beyond the scale of what I think we can realistically do if it’s only public capital."

The Biden administration, for its part, has been light on specifics so far this week, though that could come into focus today.

It has not set a specific deadline for halting the sale of gasoline-powered cars or for achieving emissions reductions from the industrial sector. Officials have stressed the role of states, cities and businesses, as well as the role of developing technologies like hydrogen, battery storage and carbon capture.

"We’re not making any promises, and we’re not making any demands right now because this is about basically using the market to generate the kind of reductions we need," White House climate adviser Gina McCarthy told reporters yesterday when asked about the administration’s timeline for scaling up EVs.

As leaders spoke at the summit, the administration yesterday moved to restore California’s waiver to make its own tailpipe emissions standards.

Climate envoy John Kerry suggested that the Biden administration might not need Congress to get much of the reduction it’s hoping for.

It’s an idea that some progressive environmental groups have long advocated, given the wide powers of the Clean Air Act and polarization on Capitol Hill.

"A lot of the plan is executable through executive order," Kerry told reporters during an appearance in the White House press room.

That belied comments from congressional leaders, who said they see a heavy role for lawmakers in meeting Biden’s target.

"The best way to achieve this ambitious goal is through bold action by this Congress through legislation to reduce carbon pollution, while creating millions of jobs and economic prosperity in a new clean energy economy," Senate Majority Leader Chuck Schumer (D-N.Y.) said on the floor yesterday.

"Any legislation without a serious and bold climate component will make it much, much harder to achieve President Biden’s goal."

Congress could cover some of the ground by scaling up EVs and overhauling the power sector, which maintained a precipitous emissions drop last year as coal-fired plants continued to go offline, according to the Rhodium Group analysis.

Biden’s infrastructure plan includes a federal clean electricity standard aimed at 100% clean energy by 2035. Democrats on the Energy and Commerce Committee have mirrored that target in the "Climate Leadership and Environmental Action for Our Nation’s (CLEAN) Future Act," H.R. 1512, the climate and environmental justice legislation that Chairman Frank Pallone (D-N.J.) introduced last month.

Republicans have shown an interest in investing in EVs, particularly amid commitments from automakers to massively scale up sales, including General Motors Co.’s pledge to sell only zero-emissions vehicles by 2035.

But they have largely rejected clean electricity standards, as well as carbon taxes, meaning Democrats would likely have to walk a tightrope to fit decarbonization policies into budget reconciliation, which allows certain bills to bypass the Senate filibuster.

Still, some moderates yesterday did not dismiss the 2030 target out of hand. Sen. Lisa Murkowski (R-Alaska), the former Energy and Natural Resources Committee chair and a key appropriator, said Biden’s targets are "pretty aggressive" and questioned what role Congress is expected to play in meeting them.

But she said it would be better for Congress to act than for the Biden administration to try to achieve its climate targets through regulations.

"I didn’t see any details that gave me much of a direction in terms of, OK, what is it that they’re going to be asking the Congress specifically to do?" Murkowski told E&E News yesterday. "The only thing that we’ve seen is the [clean energy standard]."

Murkowski was noncommittal about that proposal.

Another wild card in the 50-50 Senate is Energy and Natural Resources Chairman Joe Manchin (D-W.Va.), who has appeared open to clean energy standards but wavered on carbon pricing.

Manchin spent much of yesterday talking up carbon capture as a critical technology to reduce emissions by 2030.

The Biden administration has so far been supportive of efforts on Capitol Hill to bolster carbon capture, even giving the technology a shout-out in its announcement yesterday.

"There are people who are going to say this is not feasible and that we can’t get that type of reduction in that short period of a time, so that would mean we would have to eliminate using all fossil," Manchin said during a hearing that amounted to a pep rally for carbon capture technology.

Republicans remain a major obstacle to the administration’s ambition, given the possibility that they could take back Congress in 2022 and the presidency before 2030.

The House GOP this week offered its own slate of modest tree planting and carbon capture bills as part of a counter-messaging campaign that largely served to signal their continued support for fossil fuels and their opposition to the Paris accord (Climatewire, April 22).

Republicans did not offer their own ideas for emissions targets when asked yesterday. While renewable energy and carbon capture generally enjoy bipartisan support, Republicans are resistant to emissions targets and most policies that would reduce or eliminate fossil fuel use.

"It will also hurt America’s international competitiveness. It’s no wonder President Biden won’t explain to the American people just how much his plan is going to cost them."

The lack of specifics has emerged as a sticking point for the GOP, even if most Republicans oppose the efforts to curb fossil fuel production that the Biden administration has taken in its first few months.

Rep. Garret Graves (R-La.) took exception to Kerry’s suggestion that the administration could act unilaterally to reach the 2030 target.

"This is potentially the most impactful financial implication on the American public, and for them to be out there bragging about the fact that they want to move unilaterally on this is ridiculous, just totally absurd," Graves said.

The economics of fossil fuels could also be an issue for Democrats who hail from oil- and gas-producing states, which derive jobs from the industry and a huge chunk of their revenue from royalties.

Sen. Martin Heinrich (D-N.M.) said prodding the oil and gas industry to move into hydrogen and other forms of alternative energy would be a crucial part of the transition.

"My hope is that we can begin to have a conversation with oil and gas producers about what the transition plan looks like for them, because if you look at Europe, that’s already happened," Heinrich said in an interview.

"Our domestic majors have been much more resistant to embracing that kind of approach, and I think it has not served their market cap well; it’s not served their investors well, and I’m hoping that’s changing."