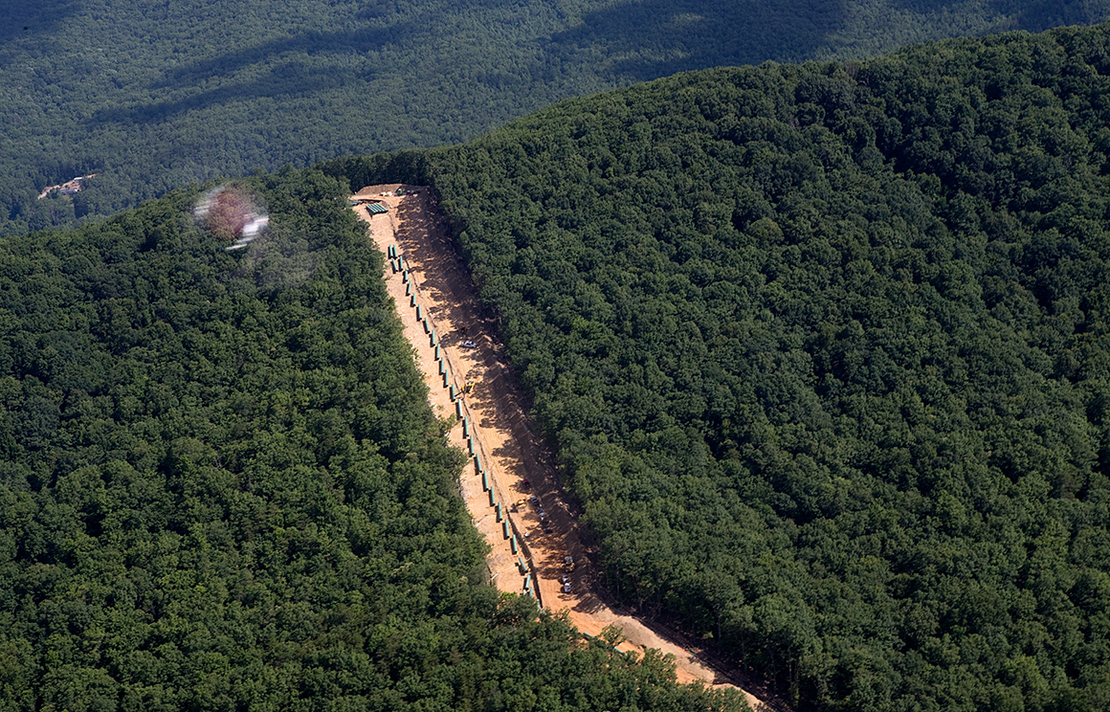 The Biden administration has agreed to advance the controversial Mountain Valley pipeline project as part of a broader permitting reform plan in Congress, a spokesperson for Energy and Natural Resources Chair Joe Manchin (D-W.Va.) said yesterday.

Legislation in the works would require federal agencies to take “all necessary actions” to permit the natural gas project slated to run through Virginia and West Virginia, according to a summary shared with E&E News.

It also would grant jurisdiction to the U.S. Court of Appeals for the District of Columbia Circuit over litigation associated with the pipeline.

In addition to advancing the pipeline, which is being developed as a joint venture by Equitrans Midstream Corp. and other energy companies, the permitting deal would direct the president to “designate and periodically update” 25 energy infrastructure projects considered to be of high priority. It would also establish a two-year timeline for federal environmental reviews associated with “major projects” and a one-year timeline for “lower-impact projects” (E&E Daily, Aug. 2).

Unlike the reconciliation bill, the new agreement with the Mountain Valley pipeline measures would need backing from Republicans and at least 60 members of the Senate to pass (E&E Daily, July 29).

Initially approved by the Federal Energy Regulatory Commission in October 2017, the 303-mile Mountain Valley pipeline has faced years of legal challenges and prolonged opposition from environmental and conservation groups, who say the project is nonviable. Manchin has repeatedly backed the $6.6 billion project, describing it as necessary for maintaining a reliable and affordable energy system (Energywire, July 21).

In a research note yesterday, ClearView Energy Partners LLC described the plan to move legal challenges to the D.C. Circuit as an “unusual directive,” noting that project opponents have succeeded in vacating some of the project’s permits at the 4th U.S. Circuit Court of Appeals. In May, project developers unsuccessfully asked for new judges to hear a challenge to a state water permit (Energywire, June 23).

“We view this Congressional directive (if enacted) as materially changing the prospects for MVP and its planned timeline,” Clearview wrote about the accord.

The plan could affect several federal agencies if it enacted. Mountain Valley still has permits pending from the Bureau of Land Management, the Forest Service and Fish and Wildlife Service. Two state water permits from Virginia and West Virginia are also still being litigated.

In an emailed statement, Natalie Cox, a spokesperson for Mountain Valley Pipeline LLC, said Mountain Valley “is being recognized as a critical infrastructure project that is essential for our nation’s energy security, energy reliability, and ability to effectively transition to a lower-carbon future.”

FERC did not immediately provide a comment on the agreement.

The announcement comes as Mountain Valley has been under heightened scrutiny. In June, developers of Mountain Valley asked FERC for four additional years — until 2026 — to complete the pipeline, citing lawsuits and the outstanding federal state permits that have delayed progress on the facility (Energywire, June 27).

The FERC request remains pending and has garnered dozens of comments from national environmental groups and landowners urging FERC to reject it, as well as support for the request from West Virginia’s congressional delegation and Virginia Gov. Glenn Youngkin (R), among others.

According to Mountain Valley’s website, “total project work is nearly 94 [percent] complete, which includes 55.8 [percent] of the right-of-way fully restored.” The company is committed to working with regulators to secure all permits and finish construction, Cox added.

But critics say the pipeline has repeatedly violated environmental requirements and that the natural gas it was designed to send to Mid-Atlantic and Southeastern states is not needed. Some have also raised concerns about the project’s impacts on historically disadvantaged communities.

“We urge you to protect marginalized communities and cease the harm to Virginia’s residents, farmlands, waterbodies, federally endangered species and forest lands and our natural resources by rejecting Mountain Valley Pipeline LLC’s request for a four-year extension of the Certificate of Public Convenience and Necessity,” Karen Campblin, environmental climate justice chair of Virginia State Conference of the NAACP, said in a letter to FERC last month.

Once in service, Mountain Valley would emit approximately 89 million metric tons of carbon dioxide equivalent annually, equal to the emissions of about 24 coal-fired power plants, according to estimates from Oil Change International. Developers of Mountain Valley, however, have said it would be carbon-neutral during its first decade of service (Energywire, July 13, 2021).

Environmental groups opposing Mountain Valley criticized yesterday’s deal, describing it as a giveaway for fossil fuels. “The price to be paid for Manchin’s vote looks more and more like an oil and gas wish list,” Jean Su, energy justice program director at the Center for Biological Diversity, said in a statement. “Ramming through the Mountain Valley Pipeline right as people are dying from climate-fueled flooding in Appalachia is callous and horrific.”

Permitting reforms have been a longstanding priority for Manchin, who late last year announced he would not support the proposed “Build Back Better Act” that included billions of dollars worth of clean energy grants and tax credits. But last week, Manchin and Schumer said they had secured the deal on a new, smaller budget reconciliation package with some of the same clean energy and climate provisions.

The White House did not immediately respond to a request a comment.