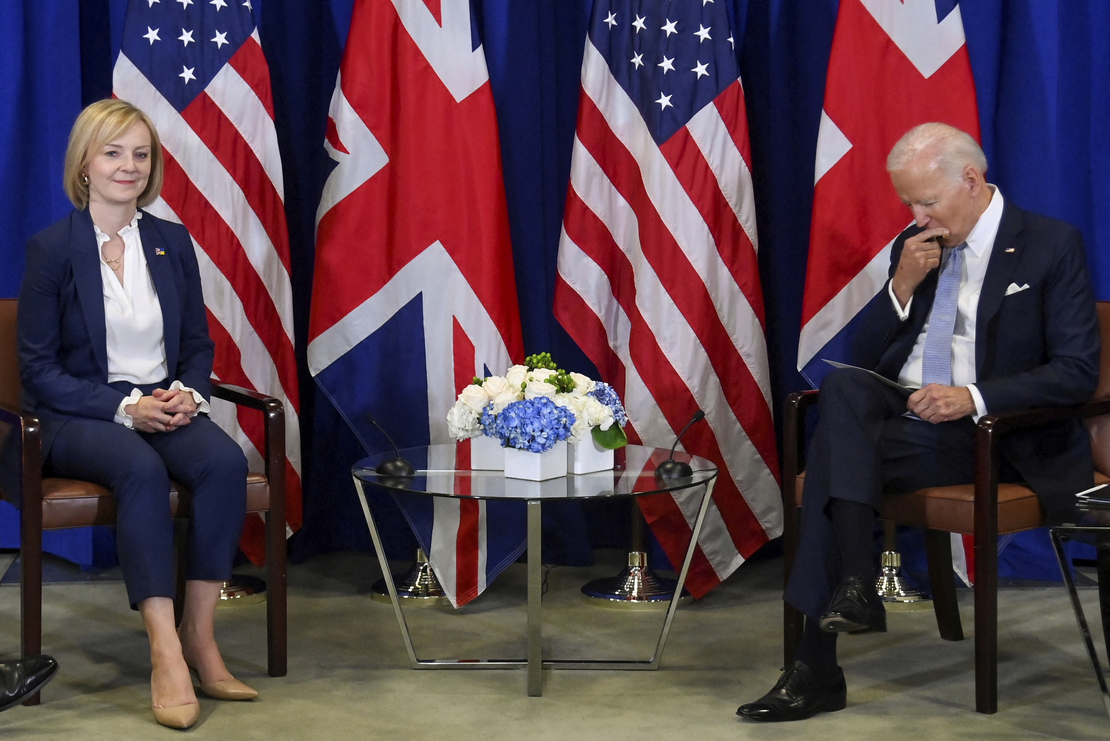 President Joe Biden celebrated his climate victories at the United Nations on Wednesday. Then he sat down with British Prime Minister Liz Truss, who is staffing the highest ranks of her new government with officials who reject climate science.

The meeting of the U.N. General Assembly in New York offered Biden an international stage to tell world leaders that he had delivered on his boldest climate pledges. He called them a “global game changer.”

“From the day I came to office, we’ve led with a bold climate agenda, we’ve rejoined the Paris Agreement, convened the major climate summits, helped deliver critical agreements on the COP 26,” he said.

“And now I’ve signed a historic piece of legislation here in the United States that includes the biggest, most important climate commitment we have ever made in the history of our country, $369 billion toward climate change,” Biden said.

Not long after making those comments, Biden had his first bilateral meeting with Truss, who is building a Cabinet of officials who have rejected basic climate science, worked to block clean energy installations and claimed that climate policy will harm people financially.

Since becoming prime minister earlier this month, Truss has pledged to reverse a 2019 fracking ban and approved a large expansion of oil and gas leasing. She stepped into the role amid an energy crisis, fueled by skyrocketing natural gas prices as a result of Russia’s war in Ukraine.

Concerns about climate change were threaded through the speeches of other world leaders at the U.N. this week, but Truss only commented on “energy security” during her meeting with Biden.

“We want to work more closely with the United States, especially on energy security, on our economic security, but also in reaching out to fellow democracies around the world to make sure that democracies prevail and we protect the freedom and future of our citizens,” she said.

The bilateral meeting comes at a pivotal moment for international climate policy. After decades of setbacks in the United States, the passage of the Inflation Reduction Act last month — and forthcoming regulations that will curtail methane emissions from oil and gas production, vehicle emissions, and carbon dioxide from power plants — puts the U.S. on track to cut its greenhouse gases in half by the end of the decade.

At the U.N. meeting, Truss did not mention climate change. But during her campaign, Truss, who once worked as a manager at Shell PLC, the British oil and gas giant, pledged to uphold the country’s 2050 net-zero carbon target. Now her early actions are raising doubts among advocates.

Truss has long criticized wind turbines and solar projects. When she was environment minister under former Prime Minister David Cameron, she cut funding for solar farms and claimed, without evidence, that they harmed agricultural production.

One of Truss’ first appointments as prime minister was Jacob Rees-Mogg, to head the Department for Business, Energy and Industrial Strategy. Rees-Mogg, who will lead the government’s climate change strategy, said recently that he wants to extract “every last drop” of oil from the North Sea.

In a 2013 opinion piece in The Telegraph newspaper, Rees-Mogg attacked policies that would shift the British economy toward renewable energy, claiming that it would send the British people “back to living in the stone-age by reducing people’s use of energy.”

“It is widely accepted that carbon dioxide emissions have risen but the effect on the climate remains much debated while the computer modelling that has been done to date has not proved especially accurate,” he wrote. “Common sense dictates that if the Meteorological Office cannot forecast the next season’s weather with any success it is ambitious to predict what will happen decades ahead.”

In fact, decades worth of climate modeling has been largely accurate and may have perhaps even underestimated heat records. The last seven years have been the hottest in recorded history, NOAA and NASA have determined.

He then encouraged people to contact local leaders across the country to block solar projects.

Truss named Anne-Marie Trevelyan as her transportation secretary. Trevelyan has tweeted that the polar ice caps are not melting.

“We aren’t getting hotter, global warming isn’t actually happening,” she wrote in 2012.

Both of those claims are false.

Truss’ chief economic adviser is Matthew Sinclair, the author of a 2011 book called “Let Them Eat Carbon,” which claims that climate policy should be scrapped because it imposes painful costs on people and benefits special interests. In a Wall Street Journal op-ed published that same year, he argued that cutting emissions would impose too high a cost on society.

“Reforms to climate-change policy — to focus on research, adaptation and resilience — have been a good idea for some time,” he wrote. “With so many other financial and economic challenges facing European economies they are becoming absolutely essential. The only question now is how long the politicians can hold out against a skeptical public that is footing a growing bill in the name of climate-change virtue.”

In the 11 years since his book was published, public concern about climate change and support for policies to reduce emissions have continued to grow.