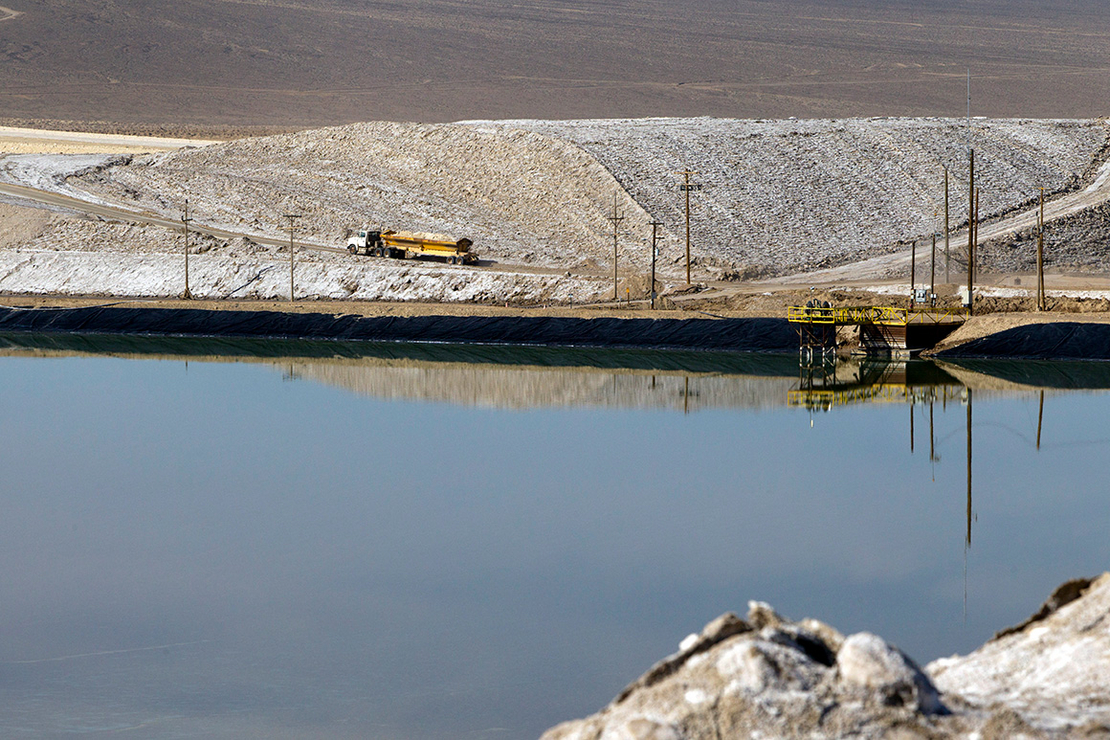 In 2017 file photo, a truck carries away waste salt at the Silver Peak lithium mine near Tonopah, Nev. Steve Marcus/Las Vegas Sun/AP Photo

President Joe Biden might want to see more domestic mining for clean energy minerals, but industry insiders and experts say his deployment of the Defense Production Act won’t speed up what they see as the biggest impediment: federal environmental permitting.

Last week, Biden invoked the 1950 law to liberate funding for fledgling mining projects across the country that one day could produce five minerals crucial in the manufacturing of electric car batteries — lithium, cobalt, nickel, graphite and manganese.

Biden’s stated goal was to invigorate the U.S. mining industry in order for the country to become independent from mineral supply lines controlled by China and Russia. As White House senior officials explained, the order was part of a “push to achieve real American energy independence.”

Biden’s order is expected to open a fire hose of Defense Department funds for activities typically required to build a mine, like feasibility studies — an investment that was celebrated by mining industry officials last week. But companies receiving those funds won’t see special permitting benefits to further aid development of their projects, a fact that mining industry players said will constrain the benefits of investing government funds.

DOD spokesperson Jessica Maxwell confirmed in an email to E&E News that the department views the Defense Production Act as “completely unrelated to the permitting process.”

With this being the case, said Botir Sharipov, a senior analyst with Moody’s Investors Service, “it will still take many years for new domestic projects to be developed” given existing environmental laws and regulations. Andrew Otis, a partner with the law firm Locke Lord that represents mining giant Glencore PLC, who said he was speaking for himself, said he doesn’t “really see this changing things very much.”

Valuable mineral resources in the U.S. are often found on federal lands, particularly out West. That means mining projects will be subject to the full range of the federal government’s environmental laws and public engagement requirements, which can include the National Environmental Policy Act, the Clean Water Act, Clean Air Act, Endangered Species Act and Administrative Procedures Act, in addition to applicable state laws.

Environmentalists say this robust permitting regime forces mining projects in the U.S. to be subject to higher health and safety standards than seen in other countries.

“As with any other kind of industrial activity, we need to be cognizant of the environmental impacts,” said Lisa Belenky, a senior attorney at the Center for Biological Diversity. She agreed that the order won’t “override the existing legal protections” against mining that her group opposes, such as the proposed Rhyolite Ridge lithium project in Nevada.

Environmentalists have frequently highlighted that a 2016 Government Accountability Office report found that the average time for the Bureau of Land Management and Forest Service to permit a new hardrock mine was about two years. But industry experts complain that federal agencies often take much longer to review mines, noting the same report, which looked at projects approved between 2010 and 2014, shows that approval times ranged from about one month to more than 11 years.

“The new order may contribute to a new mining boom, but in my opinion that contribution probably will not be large,” wrote Isabel Barton, an assistant professor for mining and geological engineering at the University of Arizona, in an email. “[S]ocial, environmental, and political issues are the primary barriers to extraction — not economics.”

U.S. mining regulations aren’t just criticized by industry. Environmental groups for years have urged an overhaul of the regulations on hardrock mining operations, which currently operate under an 1872 statute enacted amid the Gold Rush. Under this law, mining companies do not pay federal royalties for the minerals they extract on public lands — one of many complaints that advocates have about the current legal mining framework.

But overhauling the mining law through Congress has proven difficult. During negotiations last year on Democrats’ now-defunct climate and social spending package, Sen. Catherine Cortez Masto (D-Nev.), who represents a state where mining is popular, removed language from the bill that would have imposed the first-ever royalty on hardrock mines (E&E Daily, Nov. 3, 2021).

In September, Earthworks and other environmental advocacy groups petitioned the Interior Department to implement a fee collection system for hardrock miners and set stricter definitions for environmental impacts under the 1872 law.

In addition, it is unclear whether the working group will produce proposals environmentalists will cheer, or if it could become a vehicle for regulatory changes that streamline the permitting process in ways mining companies appreciate.

When Interior announced its public comment period for the working group, the department said part of its rationale for the group’s formation was that the department was directed under the bipartisan infrastructure law to identify “additional measures, including regulatory and legislative proposals, if appropriate, that would increase the timeliness of permitting activities for the exploration and development of domestic critical minerals.”

At the same time as the working group effort, Biden has teed up a veritable smorgasbord of stimulus opportunities for the mining industry — and not just in the Defense Production Act order.

There also was language in the Covid-19 relief package and bipartisan infrastructure law that included funding for mining and minerals projects and research. The Energy Department, too, has maintained a Trump-era action allowing loans intended for clean energy companies to be given to certain mining projects (Greenwire, Dec. 20, 2021).

Some mining executives are lauding all this potential financial aid.

One of those exhilarated businessmen is Lithium Americas Corp. CEO Jon Evans, whose Thacker Pass mining project in Nevada is estimated to be the largest lithium mining asset in the country (Greenwire, Jan. 27).

In a statement sent to E&E News over text message, Evans said he is “looking forward to working with the Administration” to see how the order could be applied to his company and that Biden “should be commended for [his] efforts to secure the production of critical minerals like lithium here at home.”

Some experts, like Tyler Welti of the law firm Venable LLP, also acknowledge the Biden administration’s Defense Production Act order could inject enough capital into the industry on its own that it lays some groundwork for growth.

“It will subsidize and facilitate mining for at least these five metals that have been deemed essential to national security,” Welti said. “The funding reduces the financial risk of a project and enables projects to proceed.”

However, Welti also noted that Biden’s mining money will likely be limited by the regulatory state.

“The Defense Production Act facilitates the financial side,” he said. “It doesn’t necessarily facilitate the environmental review and permitting side of implementing a project.”

So far, the Biden administration is making clear it has no plans to create a fast lane for critical minerals projects.

EPA spokesperson Taylor Gillespie confirmed in an email that existing grant and loan funding for minerals projects would not result in permitting privileges, including under the DPA order.

Interior spokesperson Melissa Schwartz wrote E&E News that there “is currently no statutory or regulatory difference in the permitting of critical minerals.”

Critics of the Biden administration say this order shows him caught in a bind set by environmental groups, whereby he is declaring mineral shortages to be a national emergency — but not one urgent enough to waive environmental laws.

“The contradictions of White House energy policy keep piling up,” wrote The Wall Street Journal editorial board Sunday, declaring Biden “invoked the Defense Production Act to subsidize the mining of certain minerals in the U.S. that his own administration is using regulation to block.”

While those familiar with federal agency oversight agree the order doesn’t do away with major permitting requirements, some did note that agencies have discretion.

Take EPA, which oversees water permitting for projects that can affect wetlands, drinking water and other aquatic resources. EPA handles Section 404 Clean Water Act permits if mine developers discharge dredged or fill material into navigable waters of the U.S., while states can grant — and EPA oversees — permits that cover mine drainage, mineral processing operations and stormwater runoff.

EPA has some discretion in how fast it permits a mine, said Mark Ryan, who worked as counsel for EPA’s Regional 10 office, but “throwing money” at projects “doesn’t make their regulatory burdens go away.”

“As a reviewer, you can be super persnickety or you can say ‘this is enough,’” Ryan said. “If the Biden administration decides, ‘Hey, mining is important, we’re doing mining,’ EPA will definitely make it easier than harder. [But] it doesn’t mean that [NEPA] or the Clean Water Act go away.”

Some experts also say there is a way for Biden to keep all of these requirements in place and still clear a path to an American-made minerals future: Staff up permit offices.

A 2019 report from the Commerce Department found BLM and U.S. Forest Service have historically faced challenges recruiting and retaining a workforce well-versed in mining projects, including biologists, archaeologists, geologists and engineers.

Ted Boling, an environmental lawyer and partner at the law firm Perkins Coie LLP, said the time taken to permit a mine will ultimately be the result of staffing decisions in the federal government. If more people are allowed to work on permitting, the job will get done faster.

“It becomes a question of how the administration is going to prioritize resources. The people that work on environmental reviews for mining are in short supply, and the speed with which they work and the priorities set are important considerations,” Boling said.

Sam Ballingrud, an attorney with Squire Patton Boggs, agreed, saying the government essentially needs to create “a TSA Pre-Check for mining if we really want to secure domestic critical mineral supplies in even the medium term.”