Biden moves aggressively on solar. Will it work? 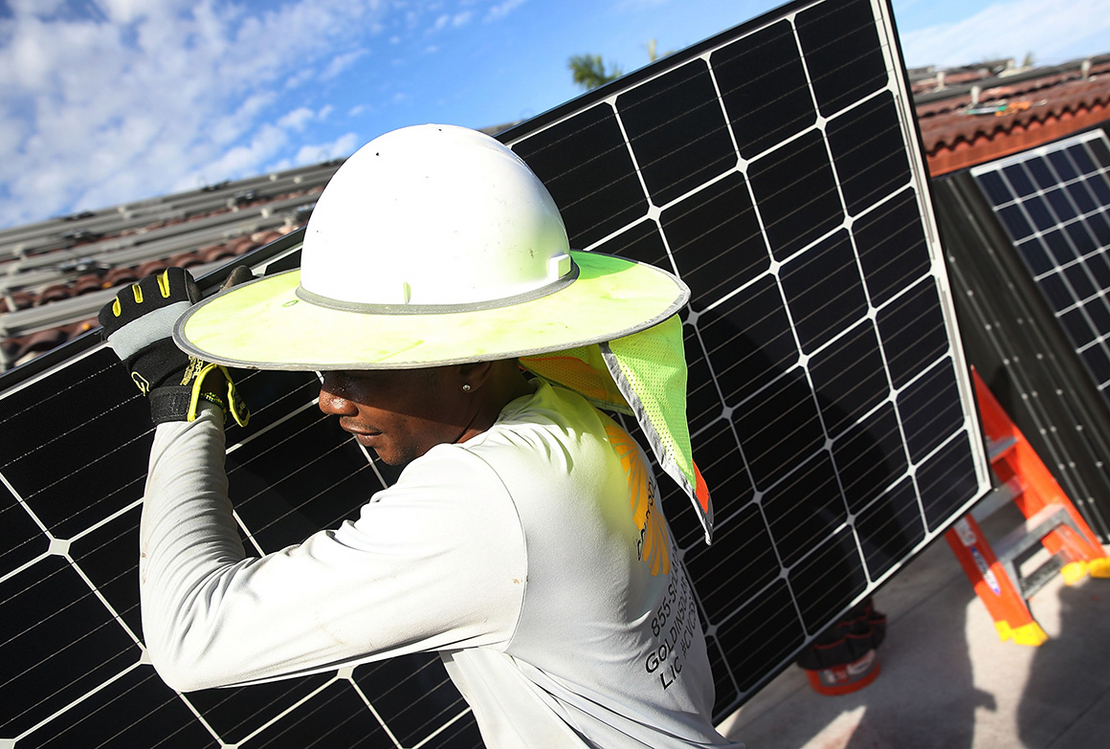 Roger Garbey, from the Goldin Solar company, installs a solar panel system on the roof of a home in Palmetto Bay, Fla. Joe Raedle/Getty Images

The White House is taking the type of aggressive climate action that advocates have long sought. Whether it can spur a boom in clean energy development is an open question.

President Joe Biden announced yesterday that he would use wartime powers granted under the Defense Production Act to ramp up solar equipment production and increase domestic clean energy manufacturing. The administration will also freeze tariffs on solar panels and components from four Southeast Asian countries.

The news was welcomed by climate activists and environmental groups that have pushed the White House to be more aggressive as its climate agenda struggles in Congress.

Jean Su, a senior attorney at the Center for Biological Diversity who has frequently criticized the administration for being too timid, called the announcement “a tremendous sea change in the Biden administration’s approach to climate action.”

“Previous to this, they were very much focused on legislation and now we’ve asked, and Biden has answered, the very dire call for the use of executive powers,” she said. “This is the strong signal that we’re seeing from him that he’s willing to use those executive powers now to get off fossil fuels.”

But analysts said it will likely take months for the U.S. solar industry to recover from a Commerce Department investigation, which sought to determine if Chinese companies were circumventing tariffs by selling modules and other equipment to the United States via Cambodia, Malaysia, Thailand and Vietnam. Yesterday’s announcement means potential tariffs will be suspended for two years as Commerce completes its investigation.

Factories in those Southeast Asia countries have ramped down production or diverted supplies as the investigation played out, analysts said. Wood Mackenzie, a consulting firm, said it anticipated U.S. solar installations will fall by roughly 30 percent this year as a result of the investigation.

Roughly 6 gigawatts of new solar projects were expected to face delays this year. Yesterday’s announcement means that 2 to 3 GW of those delayed projects may now get built, said Michelle Davis, a Wood Mackenzie solar analyst.

She said total U.S. solar installations are likely to fall from 24 GW last year to around 15.5 GW this year.

“It is going to take time to ramp back up,” she said.

The solar industry has become increasingly vocal about the damage caused by the Commerce Department investigation, creating a political headache for an administration that had once billed climate change as one of the four main crises facing the country.

“Altogether, these historic actions will cut costs for American families, strengthen our power grid and tackle the climate crisis,” she added. “And with a stronger clean energy arsenal, the United States can be an even stronger partner to our allies, especially in the face of Putin’s war in Ukraine.”

The announcement was greeted warmly by climate hawks in the Senate who have encouraged Biden to take more aggressive action, including by declaring a national climate emergency.

Environmental groups critical of what they see as a lack of progress from the administration on climate also praised the measure.

“This is a great start from @POTUS. We’re one step closer to a #GreenNewDeal, but we need more,” the Sunrise Movement tweeted. “Now Biden must follow through and use his executive power to secure funding and ensure every worker can unionize and be paid a living wage.”

The pressure was evident. In addition to pausing tariffs on solar, the White House said it would boost the federal government’s purchases of domestically manufactured clean energy equipment and invoke the Defense Production Act to bolster production of solar components and grid infrastructure like transformers.

The announcement marks the second time in recent months that Biden has looked to the Defense Production Act to help his energy agenda after he issued a similar order for critical minerals in March.

In so doing, he follows former President Donald Trump, who also used the Korean War-era law to advance political policy. Trump considered using the Defense Production Act to bail out failing coal and nuclear plants but ultimately opted against it. Trump did invoke the act dozens of times to increase medical supplies and testing in response to the Covid-19 pandemic.

Susan Tierney, a former Energy Department official who served in the Obama administration, said there were notable differences between the two administrations’ use of the law. Where Trump had sought to intervene directly in electricity markets, Biden is using it to address supply chain woes, she said. The U.S. is also facing economic challenges as a result of Russia’s war in Ukraine and the pandemic.

“This is really about correcting problems in the supply chains that are jeopardizing everyone’s goals here,” Tierney said. “That could harken back to things Trump was saying. But unlike coal — that was forestalling what the market was driving — this is helping to enable where the markets would be going in the absence of the war and its aftershocks.”

Republicans said the decision to invoke the Defense Production Act will likely serve as a precedent for future administrations.

“Now that everyone knows it makes a good press release, everyone’s going to do it,” said Michael McKenna, a GOP strategist who served on the Trump administration’s Energy Department transition team. “As a government guy, it makes me nervous because there might be a day when you really need to have it.”

The decision to pause the tariffs while Commerce completes its investigation could be challenged in court, said Todd Alexander, an attorney at Norton Rose Fulbright who represents solar developers opposed to the tariffs. Yet courts have traditionally shown deference to the executive branch on tariff matters, he said.

“The standard for overturning the Department of Commerce decision is difficult. It’s not likely that would happen, but it is possible,” he said.

Biden’s attempt to boost domestic clean energy manufacturing has been a hallmark of his climate pitch. The president has argued that making clean energy technologies at home can create jobs and cut emissions.

But the reality is more complicated. Almost 90 percent of solar modules used in the U.S. in 2020 were imported. Yet the Commerce Department investigation was prompted by a complaint from a tiny California manufacturer.

Yesterday’s move could help the clean energy industry move forward absent climate action in Congress, said Gernot Wagner, a climate economist at Columbia Business School. But he noted that it’s only a jump-start.

Wetstone applauded yesterday’s move but said it would take time for the industry to recover.

“I’m confident that we’re going to see a big rebound, but the timing is not yet clear,” he said. “I would be surprised if it were instantaneous.”

Not all solar interests were pleased with the outcome. First Solar Inc., an Arizona-based solar manufacturer with a large factory in Ohio, blasted the decision, saying it would allow Chinese-backed companies “unfettered access” to the U.S. market.

“This sends the message that companies can circumvent American laws and that the U.S. government will let them get away with it as long as they’re backed by deep-pocketed political pressure campaigns,” the company said in a statement.

The administration has sought to boost domestic clean energy manufacturing through the “Build Back Better Act,” which would have provided tax credits and economic incentives for factories that turn out products like wind, solar and battery components. But the bill was derailed by Sen. Joe Manchin, a West Virginia Democrat.

In a statement, the Energy Department said it would invoke the Defense Production Act to boost the domestic manufacturing capacity of solar components, grid components like transformers, heat pumps and insulation as well as electrolyzers, fuel cells and platinum group metals.

Administration officials did not outline how they plan to use the law, but experts said the White House has several options. It could offer price guarantees to domestic manufacturers or invest directly in new manufacturing facilities via the Department of Energy. DOE could also purchase domestically manufactured components and sell them into the market, but most experts said they considered that option less likely.

They said the Energy Department will now begin a process of outlining how it will use the act.

Many greens had felt the administration could do more to address the slowdown in solar installations created by the Commerce investigation, said Robbie Orvis, director of energy policy design at Energy Innovation. Yesterday’s announcement is evidence that critique was true, he said.

“But we’re going to need a lot more to get to the [climate] targets the administration has outlined,” Orvis said.