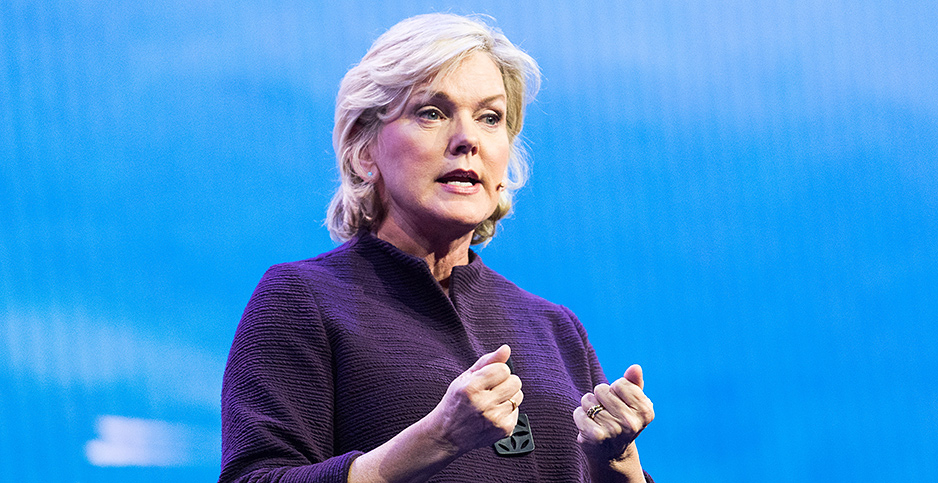 Former Michigan Gov. Jennifer Granholm (D) is in the running to be special assistant on climate for President-elect Joe Biden. Michael Brochstein/Sipa USA/Newscom

President-elect Joe Biden’s short list of candidates to serve as his domestic climate adviser is beginning to narrow, with three names coming up the most, according to multiple sources.

As Biden considers who will lead his sweeping climate programs in the U.S., he appears to be moving away from establishing a dedicated climate council within the White House, according to sources. That idea was floated by high-profile climate experts to punctuate the issue’s importance across the federal government.

"Creating a climate council just means a little bit more bureaucracy because we do have that already," a source close to the transition said. "Within the White House structure, you have a lot of different councils responsible for overlapping questions and issues, and that in itself can already be a problem, and climate really spans literally every issue."

Since the incoming administration is focusing on bringing climate into a number of topics, from the economy to national security, having a "National Climate Council" could result in redundancy, two sources said. The council could also inadvertently interfere with the work of the White House Office of Science and Technology Policy as well as the Council on Environmental Quality, they said.

The transition team is now discussing the shape of Biden’s domestic climate team. Ron Klain, Biden’s pick for White House chief of staff, indicated last week that the team would soon announce a domestic climate lead to complement Biden’s appointment of former Secretary of State John Kerry to a new senior climate diplomacy position. Kerry’s domestic counterpart could be announced as soon as next week, the sources said.

Zaidi is currently the top choice to take a role coordinating the White House climate team, according to sources who spoke on background because they were not authorized to comment publicly. That role might be the domestic counterpart to Kerry, or it might work in tandem with a senior official with a higher political profile — such as a former governor or Cabinet member.

Two sources close to McCarthy, the former EPA chief, said she is not interested in the job because she became president of the Natural Resources Defense Council in January. Another aspect is keeping her at the environmental group: It recently received a contribution of $100 million from Amazon.com Inc. CEO Jeff Bezos to be used for climate programs.

The sources cautioned that discussions around who might serve as domestic climate adviser are still active and that additional names could be floated.

Biden has already selected a number of climate-minded officials to serve in top roles. They include Janet Yellen as Treasury secretary; Brian Deese as director of the National Economic Council; Jared Bernstein as a member of the White House Council of Economic Advisers; Klain as chief of staff; and, most notably, Kerry.

The 2004 Democratic presidential nominee and Biden’s longtime colleague in the Senate will hold a seat on the National Security Council — an unprecedented status for a climate appointment.

Numerous think tanks and alumni of past Democratic administrations urged Biden to elevate climate change and ensure its integration into decisionmaking across the federal government by creating a policy council at the White House that would be on equal footing with the NEC.

That body, proposed as the National Climate Council, would have the power to convene officials from federal agencies and departments. Podesta proposed such a council at the start of the Obama administration, but it didn’t materialize.

Fresh recommendations for how to structure it were offered this year in memos by the Climate 21 Project, which has ties to the Biden transition team, and by a group of 60 experts on climate diplomacy. The council was conceived as a coordinating body for both domestic and international climate policy, and Kerry’s appointment last week was viewed by many as a rejection of the idea.

That didn’t stop proponents of the climate council from celebrating Kerry’s appointment.

"Whether or not the president-elect actually creates a climate council is not the important part," Christy Goldfuss, a former chair of the White House Council on Environmental Quality under President Obama and a lead author of the Climate 21 chapter that proposed the climate council, said in an interview after the Kerry appointment. "I think what you’re seeing already is a commitment to putting high-level senior staff in the position of executing this whole-of-government approach."

"Staffing is just part of the equation," said Jeremy Symons, a former climate policy adviser at EPA who helped write the memo. "The key lesson from past administrations is that there is no time to waste in giving the Cabinet its mandate to act and put the pieces in place early for the long grind that will be necessary to fulfill the president’s ambitions."

Kerry and his domestic counterpart will need staff, and probably a larger staff than was devoted to climate change under Obama.

Kerry could be based in the secretary’s office at the State Department, as other presidential envoys have been, or at the White House. But he’ll need support from staff at the National Security Council.

The White House-based domestic climate adviser, meanwhile, would need an expanded office to assist with coordinating Biden’s climate agenda. Those following the Biden team’s personnel announcements from the outside said the strategy seemed to be to appoint officials first and to decide how to staff them later.