Biden negotiates infrastructure behind the wheel of an EV 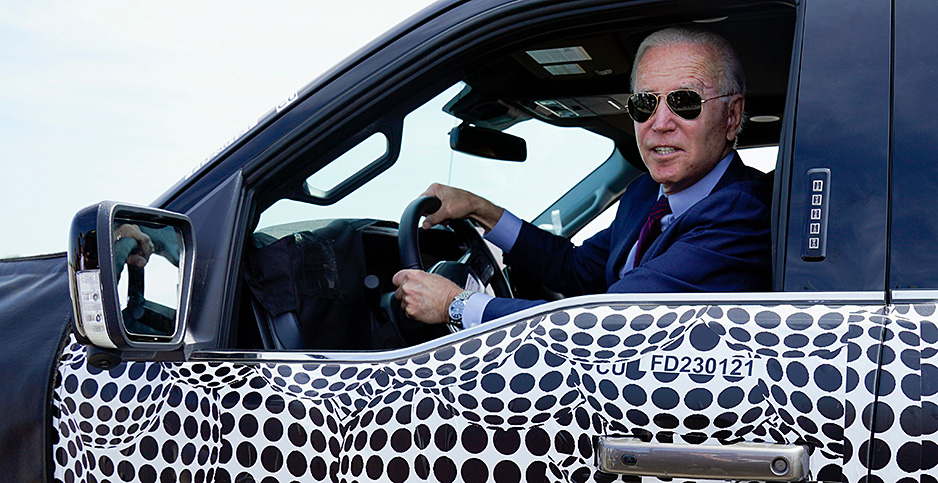 President Biden said yesterday he still wants a bipartisan infrastructure deal. Then he climbed behind the wheel of a potential deal breaker for Republicans: an electric vehicle.

Biden sped through Ford Motor Co.’s test site before rolling down his window and delivering his verdict on the new F-150 Lightning, the electric version of the country’s most popular vehicle: "This sucker’s quick."

Then he floored it.

The flourish offered a rare peek into political negotiations that have mostly remained behind closed doors.

Now, the White House seems to be leaning into that fight.

Biden spent the day touring Ford’s Dearborn, Mich., plant where union workers assemble the F-150 Lightning. Afterward, he said the future of U.S. workers — if not the climate — depends on aggressively ramping up EV production and ownership.

Biden focused most of his remarks on the economic potential of EVs before briefly mentioning climate at the end.

"If we act to save the planet, we can create millions of good-paying jobs, generate significant economic growth and opportunity to raise the standard of living for people not only here, but around the world," he said. "In the competition for the 21st century, the future will be built right here in America."

"Certainly the president’s trip to Michigan will of course be on the minds of our officials from our end," White House press secretary Jen Psaki said aboard Air Force One en route to Biden’s speech.

In the past, White House officials have said Biden has only two deal breakers on infrastructure: "doing nothing" and raising taxes on people who earn less than $400,000.

Now EVs seem to be rising in importance. Psaki yesterday called Biden’s proposal to electrify transportation "one of the key components" of his infrastructure plan. At $174 billion, it’s also one of the largest.

Those visits demonstrated how much climate politics have changed since the Obama administration, when Republicans portrayed climate policy as anti-business. Now, it’s Democrats who are touting the support of corporate America for their climate plans.

"Mr. President, as you work toward a future that’s more sustainable and made in America, Ford is right there with you," Bill Ford, the company’s executive chairman, said yesterday in his introduction to Biden’s speech. He even talked up Biden’s infrastructure plan’s specific components.

"We appreciate your commitment to rebuilding the nation’s roads and bridges, establishing a network of electric vehicle chargers, and investing in the kind of clean energy manufacturing that we’re pioneering right here at Ford."

Biden isn’t ready to tell Republicans to hit the road, though, even if the two sides remain far apart on EVs.

"We believe we can find a bipartisan deal on infrastructure. And we look forward to hearing more details of their proposal," Biden said, adding that he expects to see it by today.

But even as Biden seeks a middle ground with Republicans, some congressional Democrats are pushing the White House to expand its infrastructure spending. That could complicate any effort to shrink the package.

"This framework invests half the annual resources originally proposed by President Biden on climate action alone," according to a letter first obtained by ABC News.

"While bipartisan support is welcome," they wrote, "the pursuit of Republican votes cannot come at the expense of limiting the scope of popular investments."