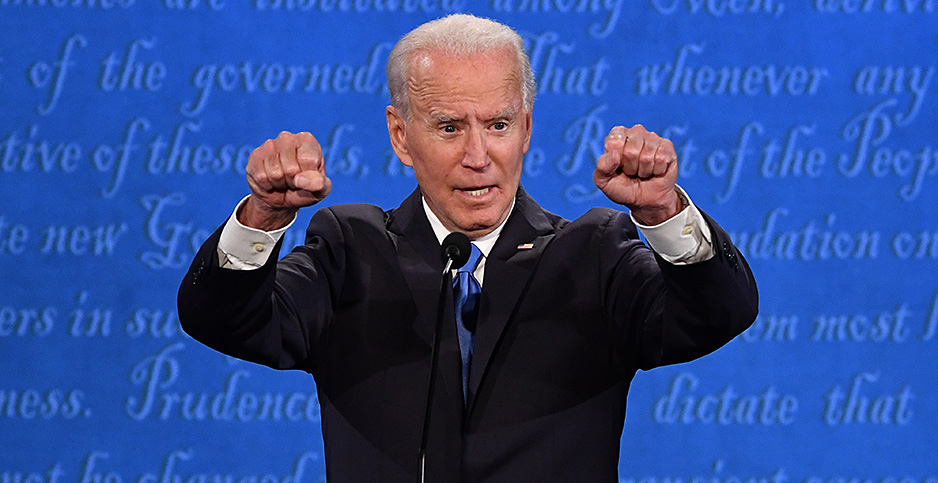 Congressional Democrats are seeking to downplay presidential candidate Joe Biden’s stated desire to "transition" away from oil, while the GOP looks to use it to President Trump’s and their own electoral advantages.

Since the remarks in Thursday night’s debate, Democrats have either tried to explain the statement away — often saying Biden merely wants to cut government subsidies for oil — or distance themselves from it.

"Joe’s position on this is clear, on fracking and on oil. He thinks we are in a long period of transition to a carbon neutral, cleaner economy," Sen. Chris Coons (D-Del.) told reporters yesterday. "And when he was speaking about oil he was talking about reducing current federal subsidies for the oil industry."

Sen. Sherrod Brown (D-Ohio), pressed by Chuck Todd on NBC News’ "Meet the Press" to address the impact to workers of abandoning oil, tried to turn attention to what he sees as Trump’s own anti-worker record.

Brown pointed to Trump and the GOP’s failure thus far to extend increased unemployment benefits enacted for the COVID-19 pandemic.

"That’s way more important than any one comment that Joe Biden or Donald Trump made," he said.

Even Rep. Alexandria Ocasio-Cortez (D-N.Y.), an outspoken proponent of banning fracking, defended Biden, while indicating she would try to get him to come to her side.

"I have a very strong position on fracking," she said on CNN’s "State of the Union." "However, that is my view. Vice President Biden has made very clear that he does not agree with a fracking ban, and I consider that a — it will be a privilege to lobby him, should we win the White House."

Some Democrats, particularly those in close elections themselves, sought distance from Biden on the issue, following the lead of Reps. Kendra Horn (D-Okla.) and Xochitl Torres Small (D-N.M.), who both denounced Biden shortly after the debate (E&E Daily, Oct. 23).

Montana Gov. Steve Bullock (D), who is challenging Sen. Steve Daines (R), said after Biden’s statement that he’ll "always stand up to my party when it’s out of touch with our Montana way of life."

Republican lawmakers are sticking to Trump’s playbook, trying to use Biden’s comments in their favor.

"Put together, Joe Biden’s proposals are dangerous and disconnected from reality. Thankfully, there was someone on the stage who understands American energy," Sen. Kevin Cramer (R-N.D.) wrote in a Fox Business opinion piece.

"As someone who values American energy, the jobs it creates and the security it provides," Cramer said, "I support this president, and I urge the American people to do the same."

"By radically suggesting that we should get rid of oil, the Democrat Party’s leader would destroy American jobs, increase energy costs on hard-working families, and make our country less secure by increasing our dependence on oil from Russia and Middle-Eastern countries," they wrote.

"Threatening to take away the livelihood of millions of hard-working families and increase household energy costs in the middle of a global pandemic is beyond irresponsible, and every Democrat in Congress ought to denounce these absurd and dangerous proclamations," they said.

Sen. Lindsey Graham (R-S.C.) said such a transition would help many foreign countries. He’s talked about it in numerous media appearances since the debate.

But the GOP didn’t just use the remarks to Trump’s electoral advantage. Some lawmakers see it as a win for their own races next month.

"Your embrace of Joe Biden’s policies to destroy the livelihoods of hundreds of thousands of Texans is offensive," his campaign said on Twitter.

"The [email protected] Energy Plan would DEFUND Texas schools and universities by BILLIONS of dollars — setting our education system back for generations," the campaign later tweeted.

The National Republican Senatorial Committee is putting out an ad to tie Sara Gideon, the Democrat taking on Sen. Susan Collins of Maine, to "liberal out-of-staters" who "want a Green New Deal, raising taxes on home heating oil."

It’s unclear whether Biden’s comments will change any minds in congressional races or at the national level (Greenwire, Oct. 23).

Still, Biden and his campaign continued over the weekend to try to walk back the remarks and play them down. In two Pennsylvania campaign appearances, Biden said he "will not ban fracking" and told the same statement to Wilkes-Barre’s WBRE-TV.

Fossil fuel industries, he said, are "already in transition. What I’m saying is we will not continue to subsidize, give tax breaks to the oil companies, which amount to $40 billion," and he repeated his pledge to stop new drilling permits on federal land.

Kate Bedingfield, Biden’s deputy campaign manager, said on "Meet the Press" that he "is not going to end the fossil fuel industry. He is going to end subsidies for the oil industry."

The president is making the issue central to his numerous campaign rallies, while his campaign staff and surrogates are hammering the issue with reporters. The campaign tapped former Energy Secretary Rick Perry to criticize Biden.

"That’s the biggest fraud that maybe we’ve ever seen running for the presidency of the United States, when it comes to the energy industry. And people of Pennsylvania are smarter than that. They know that this guy is an abject liar," Perry told reporters yesterday.

"Joe Biden will say whatever he has to say to get to be the president of the United States."