Biden on energy: Climate change is an ‘enormous opportunity’ 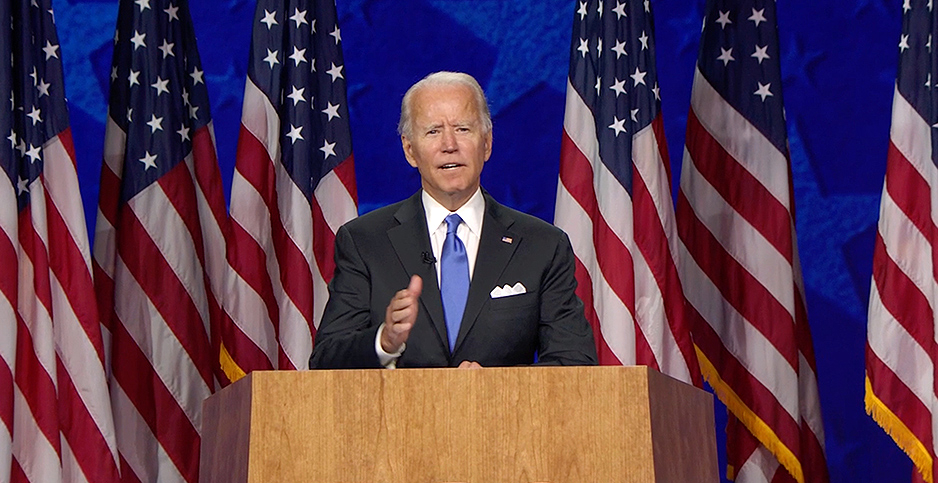 Joe Biden cited climate change as one of four crises facing the country and declared that it represents an opportunity for U.S. leadership on clean energy during his acceptance speech last night for the Democratic presidential nomination.

"We can, and we will, deal with climate change," Biden said. "It’s not only a crisis; it’s an enormous opportunity, an opportunity for America to lead the world in clean energy and create millions of good-paying jobs in the process."

Biden’s remarks on energy came as he excoriated President Trump for mishandling the coronavirus pandemic. The former vice president noted that the country faces "one of the most difficult moments" it has ever seen between calls for racial justice, a still-spreading pandemic, a flattened economy and the "accelerating threat" of climate change.

"The question for us is simple: Are we ready?" he said. "I believe we are. We must be."

Biden has centered his climate action plan as a way to create green-energy, union jobs, arguing that by tackling climate, the United States can rebound from the economic collapse created by the coronavirus pandemic and create 10 million jobs in the solar, wind and other alternative fuel sectors.

He said he’d pay for it by ending loopholes and Trump’s $1.3 trillion tax break for the richest Americans and corporations.

Other convention speakers championed the proposal, as well.

In one of the evening’s videos, Biden brought up the $2 trillion plan in a talk with union members, citing a solar facility outside Harrisburg, Pa., as an example of the green infrastructure and energy projects his proposal champions.

"The future really rests on investment," Biden said, "making sure we have access to do things that really make a difference, like what you’re doing with that solar facility outside Harrisburg."

"We realize how important it is to have you in the White House," the journeyman wireman from Harrisburg said. "We need a comprehensive energy policy for renewable resources, which I know you have one. If we’re going to build the middle class, it’s about the jobs."

California Gov. Gavin Newsom (D) called for climate change action in a speech from a forest in California, which has seen record temperatures in the past week and more than 11,000 lightning strikes that have sparked wildfires.

"The hots are getting hotter; the drys are getting drier," Newsom said. "Climate change is real. If you are in denial, come to California."

He called it an "extraordinary moment in our history."

"Mother Nature has now joined this conversation around climate change," he said. "And so we, too, need to advance that conversation anew."

Newsom said the election represents an "extraordinary moment," adding that "just today," Trump threatened to cut funding to the state "because he said we hadn’t raked enough leaves. You can’t make that up."

Earlier in the day, Trump had suggested Washington would withhold federal aid because California hasn’t heeded his warning to remove "many years of leaves and broken trees."

The president spent much of the week hammering Biden on energy, and he ramped up the attack yesterday, campaigning in swing state Pennsylvania just hours before Biden took to the stage to accept the nomination.

Trump accused Biden — a Pennsylvania native who left the state as a child — of abandoning the state and seeking to shut down its energy fields by embracing green energy.

"You’re not going to be allowed to frack anymore," Trump said, referring to hydraulic fracturing, the oil and gas drilling technique that has boosted the economy in parts of the state but faces considerable opposition. "No oil, no gas, no nothing. Just think of that."

Biden’s position on fracking would not bar the practice in the state. He has said he would end new fracking on public land but has stopped short of calling for a ban on fracking. Most fracking has taken place largely on private land.

Trump’s attack came as a Muhlenberg College/Morning Call poll released yesterday showed Biden with a narrow, 4-percentage-point lead over Trump in the state. Trump narrowly won the state in 2016.

"This is a defining moment for how our nation addresses the climate crisis, and Biden’s bold plan to build an equitable, clean energy economy sets up a stark contrast for voters between Trump and [Vice President Mike] Pence’s years of climate denial, rejection of science, and advancement of an anti-environment agenda," said Climate Power 2020 Executive Director Lori Lodes.