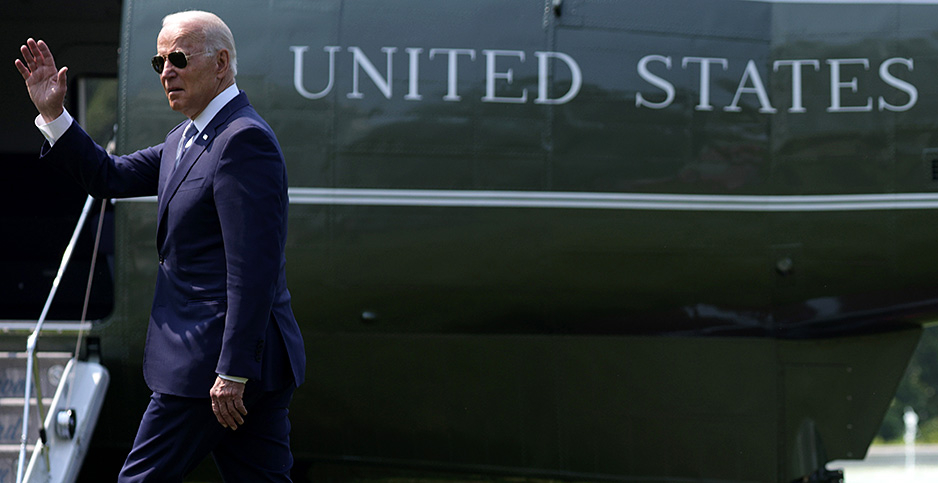 Oil production is rising on federal lands in states like New Mexico and Wyoming, countering claims that President Biden’s climate agenda has effectively throttled the oil and gas industry with a ban on new leasing and other policies.

For now, prices support more drilling, and the administration doesn’t appear to be standing in the way. The oil spike has repercussions not only for emissions, but Biden’s clean energy agenda — and the level of political pushback he receives for it, according to observers.

New Mexico, where one of every two oil and gas wells is federal, soared past North Dakota this spring to become the second largest U.S. oil producer after Texas, surpassing state production records, for example.

The price rebound has driven a return of 10 rigs to Wyoming, a significant producer of federal oil and natural gas, where last June there were zero.

Offshore, better prices have also supported a recovery for federal production. Crude oil production in the Gulf of Mexico climbed back from a low of 33 million barrels in October to nearly 52 million barrels in April, the most recent monthly data available from the Bureau of Safety and Environmental Enforcement. Natural gas production offshore jumped by 71% over the same time frame.

“We don’t think any of the [Biden] policies today have had a material impact on production,” said Pablo Prudencio, senior research analyst at Wood Mackenzie covering oil and gas supply in the Lower 48.

Crude prices have rallied over the last few months, buoyed by an increasingly vaccinated population returning to work and travel. Two weeks ago, the price of West Texas Intermediate hit the highest position since 2018, at $75 a barrel.

U.S. tight shale operators are showing far more discipline than historic norms with such a steep price increase. Publicly traded companies are returning cash to shareholders and paying down debts rather than engaging in a drilling spree, analysts say (Climatewire, June 4).

Federal land drillers are taking the price cue and putting bits in the ground at a substantial rate.

“Most of our members are cautiously optimistic about global markets and where we see that heading,” said Ryan McConnaughey, spokesman for the Petroleum Association of Wyoming.

While the Biden administration froze the sale of new leases, it has continued to approve permits to drill, the primary gatekeeping mechanism for federal development.

The Bureau of Land Management approved 616 permits in May. Since the Biden administration took office, the government has approved 2,141 drilling permits, according to federal records.

“The pace of approvals has been pretty quick,” said Prudencio. According to his analysis, the Biden administration’s approval rate outpaces fiscal 2020, when companies were gathering up drilling rights on fears that a Democratic White House would freeze access.

Many experts say they aren’t surprised by the increased production, even in the face of federal uncertainty.

In a recent report, New Mexico’s state legislative staff noted that 90% of the state’s existing federal leases could continue operations regardless of whether the Biden administration implemented a long-term leasing freeze.

That’s partly because drillers anticipated the Biden administration, with many securing drilling rights ahead of the inauguration. They’ve also been staking out the best land positions in southeast New Mexico for years as horizontal drilling in the prolific basin drove excellent returns, leaving few areas untouched or unclaimed today.

“Only about 7% of Delaware inventory is at risk from any federal leasing ban,” said Bernadette Johnson, a senior vice president at energy data company Enverus, referring to the prolific oil basin that straddles New Mexico and Texas, where most of New Mexico’s drilling is taking place. “If we cut this further by excluding areas where drilling is happening right now … it’s only 5% of Delaware inventory at risk.”

So far in 2021, permitting approvals onshore in the oil patch are on par with previous years and may be headed for a record.

Between Jan. 20 and July 15 last year, BLM approved 2,189 drilling permits — only slightly more than this year under Biden, according to federal records. This year is on track to surpass 2019, when the Trump administration was robustly supportive of the oil and gas sector. That year BLM approved 1,696 onshore permits.

The uptick undermines complaints by GOP lawmakers, and drillers, that federal oil development is logjammed by politics. But it’s also stoking fear from environmentalists that the Biden administration won’t take the kind of actions needed to make big strides on climate.

Drillers fear, and conservationists hope, that the administration will make bold moves to change the landscape of oil and gas on public lands and waters. Administration officials have signaled their support for higher royalties on oil and gas production and stricter controls over where oil and gas operators are allowed to drill. But it’s unclear, seven months into the Biden administration, how ambitious its reform of the federal oil program will be.

The Biden administration’s actions on oil and gas include the freeze on new leasing and a temporary halt on local BLM offices making permitting decisions. A federal judge has temporarily barred the administration from continuing with its leasing ban, though when auctions may resume is unclear. The administration has mostly lifted its direction that headquarters officials should sign off on permitting, but it is keeping a close eye on extensions for federal permits or leases, according to E&E News’ reporting.

An interim report on possible changes to the oil and gas program — ordered up by Biden just after taking office as one of many initial steps in the administration’s plan to address the climate crisis — is expected soon from the White House. But until then the shape of any revamp by the Interior Department will remain speculation.

Nonetheless, pro-oil lawmakers have responded to the administration with hostility.

“We have witnessed an all-out assault on American energy,” House Minority Whip Steve Scalise (R-La.) said in a statement earlier this month, introducing legislation that would give states more authority over federal oil and gas permitting.

Wyoming Rep. Liz Cheney (R), who represents the largest gas-producing state from federal minerals, introduced legislation on June 30 to protect current royalty rates on federal lands, reacting to signals from the White House that it is likely to raise that rate to account for climate costs of drilling federal minerals.

For their part, climate champions say the drilling uptick in the oil patch is proof that the oil and gas industry exaggerated impacts of Biden’s policies.

“Fundamentally it underscores that to the extent the oil and gas industry needs to drill public lands, it’s certainly not feeling any pain under the Biden administration,” said Jeremy Nichols, climate director for WildEarth Guardians.

But Nichols added that his group is wary of where this administration will land on climate reform, if so far it’s done little to quell drilling.

“It’s concerning to us about where the leasing pause may go,” he said. “The pace of [drilling permit] approvals definitely raises concerns that the interest of the oil and gas industry is taking precedent over the interest of confronting the climate crisis, and that is unacceptable.”

For others, the uptick underscores the need for immediate reforms not tied to the broader leasing pause or the Interior study of the oil program.

Several conservation groups penned a letter last month asking Interior Secretary Deb Haaland to immediately limit oil and gas development. They argued that nearly every barrel of crude produced on federal lands is sent downstream to be processed into gasoline, diesel or other fuels that drive greenhouse gas emissions.

Erik Schlenker-Goodrich, executive director of the Western Environmental Law Center, said the Biden administration is under lots of political pressure but ultimately must get in the way of the oil and gas industry.

“I’m sympathetic to the political gantlet that the Biden administration must run to follow through on its climate commitments,” said Schlenker-Goodrich, who signed the letter. “We intend to support the administration as it runs that gantlet but to also hold them accountable to their commitments.”

Still, oil and gas champions argue that the Biden administration’s stance on oil is increasing regulatory uncertainty. And that could unfairly depress companies’ confidence in drilling on their federal oil and gas leases, some say.

Oil and gas reserves in Western states are “inextricably linked” with federal lands and so too with federal energy policies, said Kathleen Sgamma, president of the Western Energy Alliance in Denver.

Prudencio, of Wood Mackenzie, said his team couldn’t predict the long-term outlook from Biden’s oil policies before the administration says what they are.

But if prices hold, current estimates are that next year oil and gas production will only grow across the country, he said.