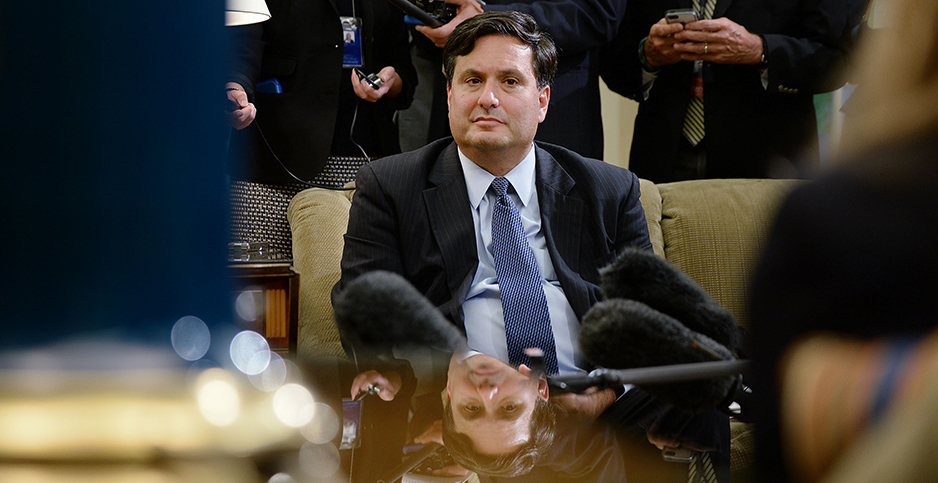 Klain served as Biden’s chief of staff early in his tenure as vice president and coordinated the Obama administration response to the 2014 Ebola outbreak.

His key role in administering the 2009 stimulus package and its $90 billion for clean energy projects opened him up to criticism when one failed spectacularly. Klain was accused of dismissing auditors’ concerns about Solyndra, a clean energy firm held up as an example of the administration’s clean energy agenda before it laid off employees and filed for bankruptcy.

Klain was cited 60 times in a report by Republicans on the House Energy and Commerce Committee detailing the awarding of the Department of Energy loan and the subsequent bankruptcy.

Biden has shied away from branding his climate plan as a Green New Deal. That’s how Klain described it, however, shortly before Biden claimed the Democratic nomination. Biden has since proposed an even more ambitious plan to spend $2 trillion across four years (Climatewire, Nov. 11).

The White House chief of staff coordinates high-level policy across the federal government. Klain will oversee matters as varied as political messaging, hiring key staff and Biden’s briefings. Biden pointed to Klain’s work on the Ebola crisis as he announced the move last night.

"His deep, varied experience and capacity to work with people all across the political spectrum is precisely what I need in a White House chief of staff as we confront this moment of crisis and bring our country together again," Biden said in a statement.

During the campaign, Klain touted the boldness of Biden’s climate plan.

"He was never going to be ‘middle ground’ on climate change," he said in a tweet in 2019. "But now that his green energy revolution and environmental justice plan is public, you don’t have to take my word for it — you can judge for yourself."

Despite the criticism on Solyndra, Klain was willing to engage in political combat after leaving the White House. In 2017, he needled Trump’s Energy Department secretary, Rick Perry, when DOE bragged that Perry was "winning" his "fight with climate scientists."

Our last Energy Sec was a nuclear physicist; his predecessor won the Nobel Prize. Our current Energy Sec brags about fighting scientists. pic.twitter.com/GvubdeFZoX

Klain had been working as a venture capitalist before joining Biden’s campaign as an adviser. Years ago, Klain began his legal career as a law clerk to Supreme Court Justice Byron White in 1987. He later served as general counsel for the Gore Recount Committee in 2000.

Progressives noted his ties to Al Gore, who championed restrictions to fight climate change, in cheering his appointment. They’re also hoping he can bring more progressives on board at the White House.

"Personnel is policy," said Jamal Raad, co-founder of the climate group Evergreen Action. "This first appointment gives us confidence President-Elect Biden will continue to shape his government to fulfill the mission of his bold, ambitious climate plan."

Klain, a veteran of Capitol Hill, also worked for Biden on the Judiciary Committee from 1989 to 1992, a time that included the confirmation hearings for now-Justice Clarence Thomas.

He was chief of staff to then-Vice President Gore, and he worked in the 1980s for then-Rep. Ed Markey (D-Mass.), now one of the leading proponents of the Green New Deal in the Senate.

Klain is married to Monica Medina, an environmental activist who publishes the newsletter Our Daily Planet. Medina also held senior environmental roles in the Obama administration, including at NOAA.

Solyndra was a black eye for Obama’s clean energy initiatives. The company filed for bankruptcy in 2011 after receiving a more than $500 million loan. Critics said the failure showed that the Democratic administration was seeking to pick winners and losers. Supporters said backing risky ideas and companies was part of the point.