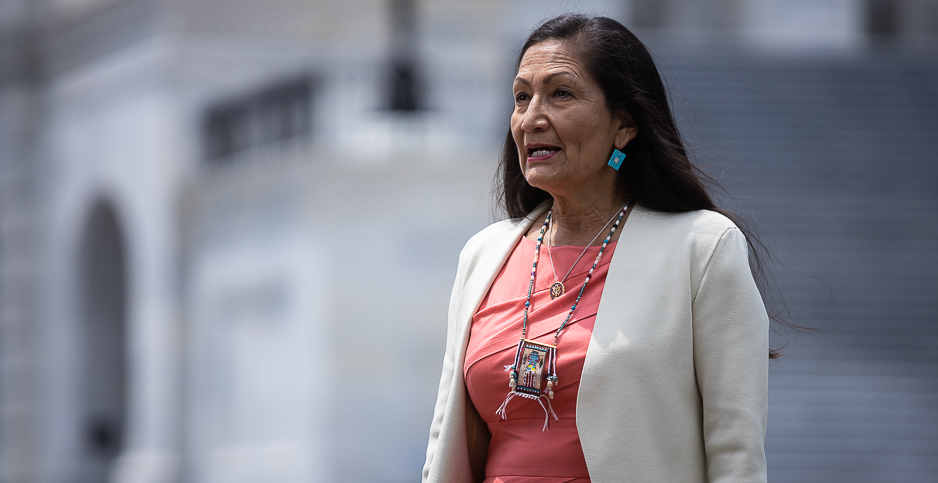 Off Capitol Hill, news of Rep. Deb Haaland’s selection to lead the Interior Department has energized the progressive base, mobilized tribal communities and thrilled politicos who want to see President-elect Joe Biden make history with his first round of Cabinet picks.

In Congress, however, the New Mexico Democrat is about to run the gantlet of a confirmation process in a Republican-led Senate that has only just begun to publicly acknowledge the reality of President Trump’s defeat (E&E News PM, Dec. 17).

"The fact that she’s not coming in with Zinke’s or Bernhardt’s agendas, that she brings a whole different and more inclusive perspective into how that agency functions, I think that’s going to be one area of opposition," quipped Rep. Raúl Grijalva (D-Ariz.).

The chairman of the House Natural Resources Committee and one of Haaland’s most fervent backers for the Interior job, Grijalva was referring to Trump’s former and current Interior secretaries, Ryan Zinke and David Bernhardt, respectively.

In the House, Haaland could become the subject of intense anxiety as the third member to decamp for the new administration, which at the time of her departure following confirmation would shrink the Democratic majority to a point where the Republican minority could actually find itself with some leverage to force a more moderate legislative agenda (E&E Daily, Dec. 11).

"Sure, I am," said House Majority Leader Steny Hoyer (D-Md.), when asked yesterday if he’s worried about losing another Democrat to the Biden administration.

He and others had been urging the president-elect to stand down in order to protect the party’s slimmest hold on the House since World War II (E&E News PM, Dec. 16).

More than 50 House Democrats signed letters to the Biden transition team on Haaland’s behalf over the last few weeks.

For no other potential Cabinet nominee so far has there been a coalescing of colleagues like there was around Haaland, despite the fact that there were other members of Congress actively competing for the job — specifically Sen. Tom Udall (D-N.M.), a retiring veteran lawmaker who is beloved by members of both parties and chambers.

"I’m over the moon right now," said Rep. Alexandria Ocasio-Cortez (D-N.Y.). "Congresswoman Haaland would not just represent the first Native woman in charge of federal lands, but she brings a philosophy of both a commitment on climate and justice and the historic weight of having a Native woman, no less a progressive one, in charge of federal lands."

Haaland, the chairwoman of the House Natural Resources Subcommittee on National Parks, Forests and Public Lands, also managed to spend her first term in the House without alienating Republicans.

Rep. Bruce Westerman (R-Ark.), the incoming ranking member of the full Natural Resources Committee, told E&E News that he has observed Haaland as someone who has "been good in the committee, and fair in her comments, and I appreciate a lot of the work she’s trying to do for abused women on tribal lands. I think there are definitely areas where we can work together on that."

Haaland has championed legislative efforts over the last two years to shine a spotlight on the plight of Indigenous women vulnerable to violence.

A bill she co-sponsored to create a federal advisory committee to establish best practices for preventing the alarming rates of murder and trafficking of Native Americans and Alaska Natives was signed into law in October.

"I don’t know in the role of secretary of the Interior what kind of job she would do," Westerman continued, "but she certainly seems like someone you could sit down and visit with."

In the Senate, Haaland’s work on combating violence against Indigenous communities could make her an attractive nominee to Sen. Lisa Murkowski (R-Alaska), who co-sponsored the Senate companion to Haaland’s "Not Invisible Act of 2019."

Though Murkowski is being termed out of her chairwomanship of the Energy and Natural Resources Committee, which will preside over Haaland’s confirmation proceedings, she is likely to emerge as a key vote on Haaland’s nomination as a senior member of the panel and a more moderate lawmaker inclined to support some of Biden’s nominees. Murkowski’s office did not respond to requests for comment.

Elsewhere in the Senate Republican Conference, however, support for Haaland is not guaranteed, though GOP senators were more circumspect in their reactions to her nomination than they have been on some of Biden’s other picks so far, for instance, Neera Tanden for Office of Management and Budget director.

Sen. John Barrasso (R-Wyo.), the current chairman of the Environment and Public Works Committee, who will likely be succeeding Murkowski at the helm of Energy and Natural Resources in January if the GOP holds the Senate after the Georgia runoff, was noncommittal in a statement to E&E News yesterday.

"The Department of the Interior impacts the lives and livelihoods of millions of Americans. America’s public lands and natural resources are critical to the economy in Wyoming and across the West," Barrasso said.

"While I have not had the opportunity to work with Representative Haaland on these issues, I will keep an open mind during the vetting process," he said.

Haaland’s track record before and since she arrived on Capitol Hill will be closely scrutinized.

In 2016, she visited the Standing Rock Sioux Tribe’s reservation in solidarity with protesters against the Dakota Access pipeline — a fight for tribal sovereignty against the construction of a new pipeline that also became a political lightning rod in the debate over the future of domestic energy independence.

As a member of Congress, she has championed environmental justice legislation Republicans think would lead to overly burdensome government regulations and co-sponsored the Green New Deal.

Haaland has also been deeply critical of the Trump administration’s aggressive pursuit of fracking on public lands.

How Senate Republicans approach Haaland’s nomination also could depend on pressures from outside interests and industries.

The New Mexico Oil and Gas Association said in a statement yesterday that it hopes "Rep. Haaland will employ a balanced approach [to oil and gas drilling policies] that considers the needs of all who depend on public lands, including the thousands of men and women and families whose livelihoods depend on access to public lands for resource development."

The group underscored that "[m]ore than 134,000 New Mexicans depend on the oil and gas industry as the foundation of our economy, creators of jobs, and the largest source of funding for our state budget and public schools," while "responsible energy development on federal lands is a vital part of our state’s economy."

While most Senate Democrats who praised Haaland yesterday did so without equivocation, Sen. Joe Manchin (D-W.Va.), a moderate on energy issues and ranking member on Energy and Natural Resources, was even-keeled in his response to the nomination.

"Senator Manchin looks forward to meeting with Congresswoman Haaland and having her appear before the Senate Energy and Natural Resources Committee as the first Native American nominee to be Secretary of the Interior," said Sam Runyon, Manchin’s spokesperson. "He will carefully examine her record and qualifications to serve our country."

Haaland’s strong backing from left-leaning groups could ultimately become a liability among the Republicans who are trying to paint Biden’s nominees as fringe outliers catering to radicals.

"She’s been the No. 1 choice of the Sunrise Movement and the progressive movement from day one," said one longtime energy industry lobbyist of Haaland. "At some point, Republicans may want to take a stand against a pick that’s overly progressive or out of the mainstream. Do they draw a line somewhere, and who would it be? The one with a big circle around her is Haaland right now."

"Joe Biden’s Interior Secretary nominee, Deb Haaland, supports the Green New Deal and would end America’s energy dominance," she said. "Her appointment would be a disaster for our country and economy."

However, the historic nature of Haaland’s selection may place conservative critics in a quandary.

"It’s not without peril: She is the first Native American woman to be nominated to be head of Interior," said the energy lobbyist. "The question is, does that type of symbolism outweigh her policy positions, and I think with Republicans, that may be a key factor."

Grijalva said conservatives have no compelling reason to oppose Haaland and predicted they will come on board with her nomination.

"I think she’s going to have a great support from the public in general, and if senators would have any doubt of that support, they’ll sense it," Grijalva told reporters yesterday evening. "But more importantly, you’re talking about a nominee that brings a life experience that the Senate has to not only appreciate but respect."

Haaland, who turned 60 earlier this month, was a military daughter, a single mother and a onetime addict who went on to become a political organizer, state party chairwoman and now a member of Congress and nominee to lead a major federal agency.

"The fact that her political stance, or progressive policies on some issues — that’s part of the reality that’s out there in the public, as well, the urgency to do something about climate change, the urgency to protect and conserve some of our more landmark places … all of those supported by the public, and once, I think, the senators have a glimpse into the person that Deb is, she’ll be fine," Grijalva continued. "She’ll be fine."