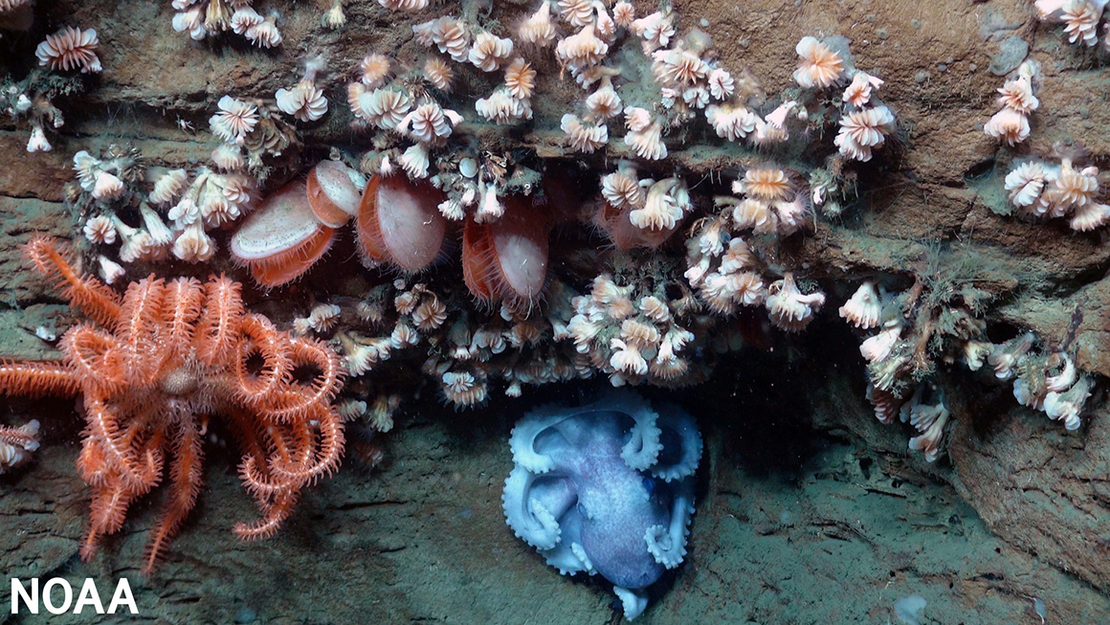 An octopus, a sea star, bivalves and dozens of cup corals are pictured on an overhang in an area adjacent to the Hudson Canyon off the coast of New York and New Jersey. NOAA/BOEM/USGS

The White House today endorsed designating the Atlantic coast’s largest undersea canyon as one of the nation’s next underwater parks, but stopped short of enacting immediate protections that could guard the “ecological hotspot” from commercial fishing, energy development or other threats.

The Biden administration announced it will begin the process for safeguarding the Hudson Canyon — which sits 100 miles off the coasts of New York and New Jersey and rivals the Grand Canyon in scale — in a series of actions to mark today’s World Oceans Day.

In addition to kicking off the designation of a new national marine sanctuary, the White House vowed to develop a “whole-of-government Ocean Climate Action Plan” on ocean-based climate mitigation and adaptation strategies.

NOAA will oversee the designation process for the Hudson Canyon, which would become part of an existing group of 15 underwater parks that includes both freshwater and ocean sites.

But that process, which includes public comment, the drafting of environmental impact statements and management plans, and potential rulemaking, is not a swift one, with a final decision taking two to three years.

“A sanctuary near one of the most densely populated areas of the Northeast U.S. would connect diverse communities across the region to the ocean and the canyon in new and different ways,” NOAA Administrator Rick Spinrad said in a statement. “It would also help advance the Administration’s commitment to conserve and restore special marine places, leaving a lasting legacy for future generations.”

The Biden administration touted the move — the second marine sanctuary it has sought to advance, along with the proposed 7,000-square-mile Chumash Heritage National Marine Sanctuary off the central California coast — as a step to fulfilling its “America the Beautiful” conservation pledge (Greenwire, Nov. 9, 2021).

That program aims to protect 30 percent of the nation’s lands and waters in a natural state by 2030 in an attempt to safeguard biodiversity and address climate change as well as achieve equitable access to the outdoors.

“As someone who grew up in New York City and went on to a career in ocean science, I am excited about how this amazing underwater environment can inspire shared interest in conserving our ocean,” Spinrad said.

The administration touted the canyon, which spans 7.5 miles wide and reaches depths of up to 2.5 miles, as an “ecological hotspot,” providing habitat for endangered, protected and sensitive species including sperm whales, sea turtles and unique and diverse seep communities” as well as cold-water coral.

The site is also home to multiple shipwrecks, including U.S. military radar platforms, and communications cables.

According to a 2016 nomination to protect the Hudson Canyon submitted by the Wildlife Conservation Society’s New York Aquarium, protections for the site should “preclude such inconsistent uses as oil, gas, and mineral extraction in the Hudson Canyon, helping to maintain fish and wildlife populations, protect our coastline, and ensure a future for the economically important fisheries and tourism industries that depend on healthy ocean ecosystems.”

But the proposal also notes that a sanctuary designation — which could cover 2,900 square miles — could fend off future commercial wind energy leasing.

“Although the site of the proposed sanctuary is much farther offshore than current wind-harnessing technology or economics can support, wind energy development in the proposed and future lease sites off New York and New Jersey will likely impact migratory species of fish, marine mammals, turtles, and especially sea birds,” the proposal states.

The National Marine Sanctuary Foundation praised the proposed Atlantic coast sanctuary, asserting that the underwater park system would be key to safeguarding “unique ecosystems, extraordinary seascapes, and treasured places for people to enjoy.”

“Hudson Canyon in an incredible underwater seascape that holds untold treasures yet to be discovered,” said NMSF President and CEO Kris Sarri, who added that the designation is a key step to achieving the administration’s conservation goals.

But some environmentalists and progressive activists have questioned the effectiveness of the marine sanctuary system, arguing both that it is underfunded and that it can fail to sufficiently protect marine life.

Environmentalists have also argued that while sanctuaries are often used to ban oil and gas drilling, some sites allow commercial bottom trawling or other commercial activities that can endanger sea life (Greenwire, Oct. 5, 2021).

“Any movement in this direction by the Biden administration is encouraging,” Rick Steiner, a retired marine conservation professor at the University of Alaska, said in an interview. “The conservation outcome of these proposed designations will depend on just what activities are permitted and what are prohibited in these waters. The marine science community would argue that the stronger the protections, the better.”

But Steiner warned that the sanctuary designation process can be slow, and urged President Joe Biden to instead use the Antiquities Act of 1906 to establish new national marine monuments.

That law allows presidents to set aside existing public lands and waters as monuments to protect areas of cultural, scientific or historic interest.

“We are still awaiting any progress on marine monument designations by the Biden administration,” Steiner noted.

He also warned that any new sanctuaries must be large enough to avoid a “postage stamp” strategy that “will look good on paper, but fall far short of effective ecosystem protection.”

The Northeast Canyons and Seamounts Marine National Monument, established off the coast of Massachusetts by former President Barack Obama in 2016, is the only such site in the Atlantic Ocean. It spans more than 4,900 square miles.

But Bob Vanasse, executive director of industry group Saving Seafood, praised the decision to utilize the sanctuaries act rather than take executive action.

“I appreciate that they are using the Marine Sanctuaries Act to do this, which allows input from affected ocean users and will allow for actual science to be considered, which is exactly why we objected to and continue to object to the marine monument designation,” Vanasse said, referring to the ongoing legal battle over the Northeast Canyons and Seamounts site (E&E News PM, Oct. 8, 2021).