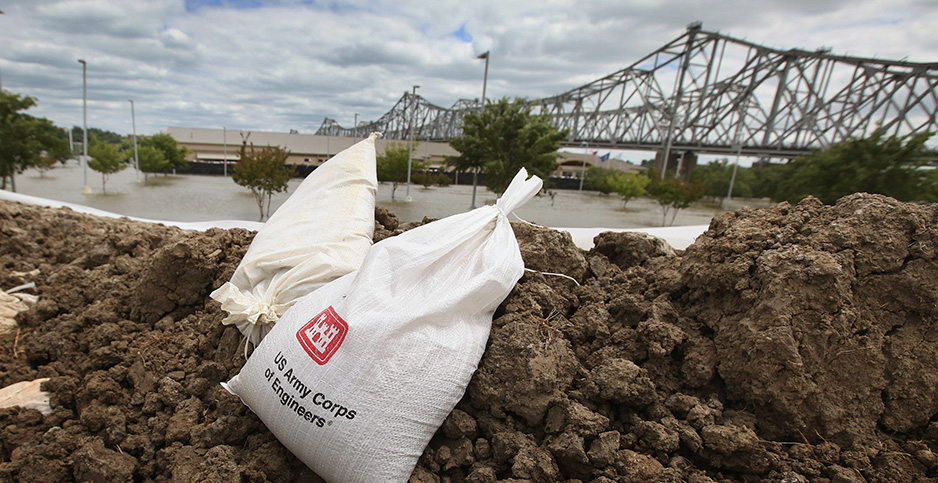 An Army Corps of Engineers sandbag rests on a levee constructed around a medical center to hold back floodwater from the Mississippi River. Scott Olson/Getty Images

Experts say it would be an important shift for a top-down agency that handles everything from issuing water permits to managing flood protection and the world’s largest ecosystem restoration efforts.

While the Army Corps has included climate change in its past work, Crook said that work is clearly labeled in the White House fiscal 2022 budget. "They’re connecting the dots, and it’s impressive," he said.

The Biden administration’s fiscal 2022 budget proposal released last week said three "key objectives" for the Army Corps were considered when crafting the document, including promoting environmental justice in disadvantaged communities in line with the administration’s Justice40 plan, which calls for 40% of all climate investments to go to disadvantaged communities. The proposal also makes clear the corps will not fund work that subsidizes fossil fuels — including work that lowers the cost of production or consumption of fossil fuels, or raises the revenue retained by fossil fuel producers.

Overall, the Biden administration requested $6.8 billion for the agency, an amount that Jaime Pinkham, the top political official at the agency, hailed at a news conference Friday as the "highest annual budget ever proposed." While it may be the highest amount an administration has ever sought for the Army Corps, the funding level is lower than currently enacted levels — the fiscal 2021 spending bill included $8 billion for the Army Corps, $145 million above the fiscal 2020 enacted spending level (E&E News PM, April 9).

Another big change: The Biden administration is proposing four construction project "new starts" and seven investigations for the coming fiscal year. Prior administrations have at times proposed zero or perhaps one "new start" project, Crook said.

The shift in focus on environmental justice could have far-reaching effects at the Army Corps, said Crook.

Pinkham on Friday said the Army is "committed to securing environmental justice and spurring economic opportunity for disadvantaged communities that have been historically marginalized and overburdened by pollution and experienced underinvestment in essential services."

The Army will also ensure 40% of the benefits of climate and clean energy investments are directed toward disadvantaged communities, and is examining key programs, expenditures and metrics to see how they affect those communities, he said.

That could affect where and how the government builds flood control or ecosystem restoration projects or dams, said Crook, and have "significant on-the-ground impacts" for disadvantaged communities.

One thing that stands out in the Army Corps’ budget proposal, sources say, is the Biden administration’s change to the corps’ "benefit-cost ratio," which is used to compare the cost of a project to benefits, or damage prevented, in selecting which projects are funded.

Historically, the Office of Management and Budget has required that new projects have a benefit-cost ratio of 2.5 with a discount rate of 7%, said Mike Strachn, a senior adviser at the consulting firm Dawson & Associates, which specializes in permitting.

When the Army Corps does a feasibility project for a flood control project, for example, the agency assesses the cost of the project, estimates annual benefits in terms of prevented damage and then compares the two, he said. That process allows the government to screen and prioritize projects, Strachn said.

But Biden’s budget lowers the threshold for projects in the budget to 2.0, meaning a project must provide $2 in benefits for every dollar it costs to construct. That’s a move, he said, that recognizes some communities don’t have the economic wherewithal that others do to pass that financial "litmus test."

For example, a project that costs the same to build in two communities could lend more financial benefits in a more affluent community where property values are higher, he noted.

"It’s a direct move to address environmental justice objectives through the corps’ economic justification process," said Strachn, who added that the Army Corps may also consider other creative ways to justify projects in economically depressed areas.

Strachn said it’s a "relatively modest but important step toward" environmental justice for the corps, an agency where change occurs slowly.

Crook said the change made in the budget essentially lowers the hurdle for making investments in navigation and flood protection projects, and signals the Biden administration will fund new construction.

Army Corps officials on Friday made clear the process for tackling environmental justice and climate change at the agency isn’t exactly hammered out.

When asked at a news conference Friday whether that new focus would change the Army Corps’ prioritization of projects or cost-benefit analysis, corps officials said they’re still hashing out the parameters of that work and definitions around Biden’s executive orders through an interagency process.

"Along with the rest of the federal government, we’re all continuing to determine all of the intricacies within these executive orders and start to build standardized definitions of what’s meant by disadvantaged communities, rural communities and the like," said Vance Stewart III, deputy assistant secretary of the Army for management and budget.

As the Army Corps gets "clarity and consistency," the agency will then begin to determine how to apply those definitions and metrics to expand their benefit-cost ratio, he said.

"I don’t think we’re going to walk away from that — it’s a great metric and a great tool — and I think all of these new provisions that the president wants to develop, we can insert into the existing ratio and give it more depth," Stewart said. "I think we can only make [it] better by developing new definitions and metrics."

Pinkham on Friday highlighted parts of the fiscal 2022 budget proposal that directly address projects and studies to boost the nation’s resilience to rising seas and inland flooding, as well as efforts to ensure tribes can access their legally recognized waters and lands.

He also said cross-agency reviews are underway to ensure vulnerable communities aren’t being left behind.

Under the budget, the Army Corps would launch seven new studies to determine flood vulnerabilities and resilience in places like central and southern Florida, the Great Lakes, New York, South Carolina and Wyoming.

Seventy-five million dollars would be set aside to make existing Army Corps projects more resilient to the effects of climate change, with an additional $8 million for zero-emission vehicles.

The administration would tap $6 million from the Harbor Maintenance Trust Fund, including $787 million for top coastal ports across the nation — which handle about 90% of waterborne cargo. More than $250 million would be set aside for Great Lakes projects, including $58 million for Native tribes to access legally recognized historic fishing areas, said Pinkham.

While the Biden administration’s language regarding fossil fuels was included in the overall budget proposal, it was left out of the Army Corps’ individual budget plan.

Crook said that language is more focused on issues at other agencies such as royalties and tax advantages, and the focus on climate-resilient infrastructure and environmental justice is far more relevant for the Army Corps’ mission and budget.