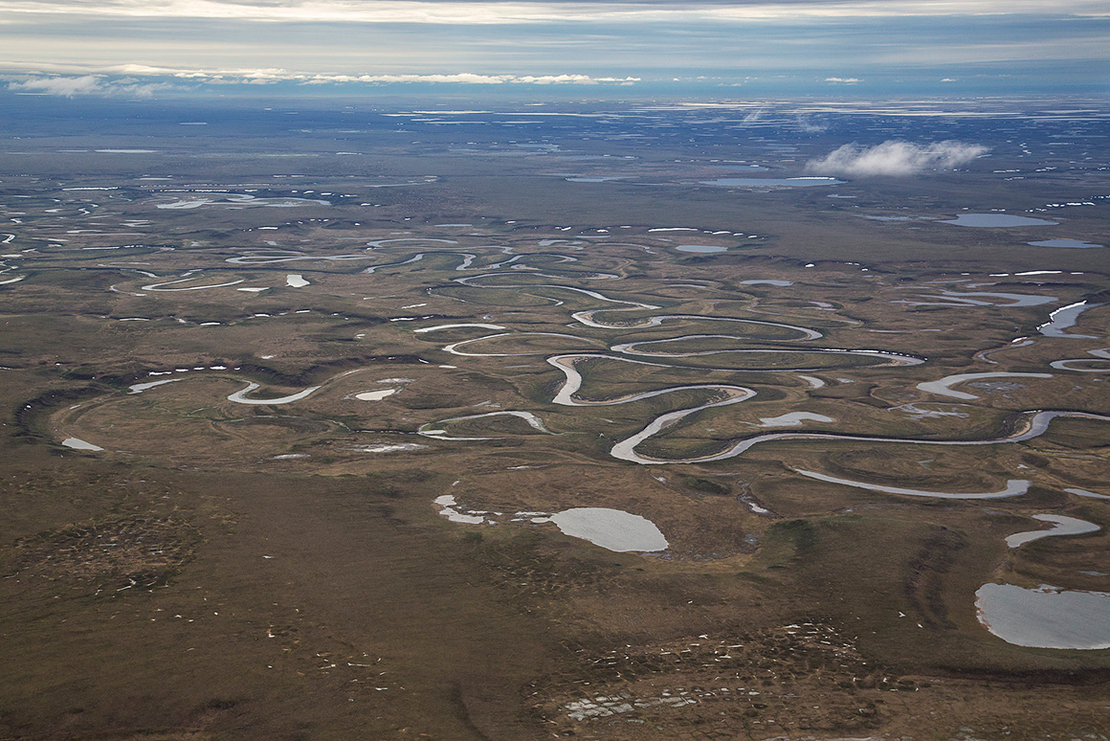 The Biden administration released an updated analysis of a major Arctic oil and gas project last week that opened the door to approving a scaled-back version of the controversial proposal — a prospect environmentalists slammed as betraying the president’s climate agenda.

The new alternative outlined in the draft supplemental EIS proposes to eliminate the “northernmost proposed drill site and associated infrastructure” in the lake area, and to defer a decision on a second drill site pending further analysis. Doing so could provide a compromise that authorizes the project to produce roughly 630 million barrels of oil over its 30-year life while reducing the overall footprint and emissions.

The project is supported by many in Alaska, including the state’s political leadership, who see it as vital to bolstering the flagging oil and gas industry on the state’s North Slope and, therefore, local economies (Energywire, Jan. 7).

Critics opposed to the Willow project in any form said they are concerned that the Bureau of Land Management, which oversees the 23-million-acre National Petroleum Reserve of Alaska where the project would be sited, appears to be preparing to move forward with the project outlined in the new alternative.

BLM says the draft supplemental EIS is not a final decision and that it will not make one until it first analyzes public input following a 45-day public comment period that will kick off when the document is published on Friday in the Federal Register.

But opponents’ concerns were heightened by the chaotic release of the draft document, which was abruptly yanked from BLM’s Willow project webpage for several hours shortly after it was posted last Friday. A different version of the document was eventually reposted.

The original draft supplemental EIS included a section indicating the bureau would not reject the Willow project, in part because Congress has authorized oil production in the NPR-A — established in the 1920s by President Warren Harding as a future petroleum resource for the Navy.

The “No Action” alternative in the original version of the draft document — which would block construction of the project — stated that “BLM does not have the authority to select this alternative because [ConocoPhillips Alaska’s] leases are valid and provide the right to develop the oil and gas resources therein.”

This sparked immediate outrage from some advocates, who blasted the document as little more than an attempt by BLM to lay the groundwork for project approval.

“It’s absolutely legal for BLM to select the No Action alternative, and indeed it’s the agency’s obligation to choose that alternative when essential to protecting water, land and wildlife. ConocoPhillips’ rights as a lessee cannot and do not limit BLM’s own statutory and regulatory obligation to protect the reserve’s surface resources,” said Bridget Psarianos, a staff attorney with Trustees for Alaska, which is representing Indigenous and environmental groups in litigation challenging the project.

The Center for American Progress also released a statement accusing BLM of telegraphing its intentions of “moving towards formal approval of the project.”

“When approved, it will define the country’s energy future for the next 30-plus years while having no impact on the pain that Americans are currently feeling at the pump,” Christy Goldfuss, CAP’s senior vice president of energy and environment who previously led the Obama administration’s Council on Environmental Quality, said in a statement.

In addition to the No Action language, the original version of the draft supplemental EIS, made up of multiple volumes and thousands of pages, listed the new alternative with fewer drill sites as BLM’s “preferred alternative” for the project in at least two sections.

BLM stated in the original version of the draft document that naming a preferred alternative “does not constitute a commitment or a decision” on the project.

The draft supplemental EIS was removed from the webpage shortly after E&E News emailed questions to the Interior Department about whether the No Action language indicated BLM believed it could not reject the project.

In its place the bureau posted a message in bold and highlighted in yellow: “Due to an error, we have temporarily removed the Draft SEIS from this site. We will post it again as soon as possible. Thank you for your patience.”

When BLM reposted the draft supplemental EIS on the project website, which appeared to be shortly after midnight Eastern time on Saturday, the sentence stating “BLM does not have the authority to select” the No Action alternative was gone.

The revised version of the draft also removed references to the new alternative as BLM’s “preferred” choice.

BLM, in an email to reporters Saturday morning, explained that the original draft supplemental EIS released the day before was an “incorrect version” of the document.

“We are happy the giant mistake in the first version — a large one, with the agency claiming they had no choice but to allow large, impactful development — was corrected and that a No Action option is rightfully being considered,” said Andy Moderow, state director for Alaska Wilderness League.

Moderow said each one of the project alternatives would have “massive impacts” to the climate and wildlife in the region.

“Given this, we’ll be strong advocates for the No Action alternative and think the impacts of the project make No Action the clear choice for an administration committed to solving the climate crisis,” Moderow said.

The Willow project has been kicked around for years, and ConocoPhillips purchased the leases at issue in the 1990s. The company initially discovered oil in the project area in 2017, with an environmental review starting the next year.

But U.S. District Judge Sharon Gleason, an Obama appointee, in August 2021 nixed the project approvals over climate and wildlife concerns raised by environmental groups in a federal lawsuit.

The Biden administration, which has defended the project in court, did not appeal Gleason’s decision. Instead, it agreed to conduct a supplemental EIS to address the issues raised by the judge.

The new alternative would reduce the number of drill sites from five to three, although leaving open the possibility of a fourth site that would need to undergo additional analysis and “a separate future decision,” the document says.

The goal of the new alternative, which was “developed by BLM and cooperating agencies” in response to Gleason’s ruling, is to “reduce the amount of surface infrastructure” within the boundaries of the Teshekpuk Lake Special Area, the draft says.

“This alternative would reduce the amount of overall infrastructure (e.g., gravel footprint, miles of gravel road, miles of pipeline) that may impede caribou movement and impact subsistence users,” it says. “Reduced gravel infrastructure would also lessen impacts to wetlands and vegetation, hydrology, gravel resources, and wildlife.”

ConocoPhillips Alaska issued a statement late Friday that does not directly address the draft supplemental EIS or the proposed new alternative, but instead extols the virtues of the Willow project.

“ConocoPhillips and many stakeholders, including residents of the North Slope and across Alaska are committed to the Willow project as it will supply much needed energy for the United States, while serving as a strong example of environmentally and socially responsible development that offers extensive public benefits,” the company’s statement said.

“The Willow project has undergone an extensive and rigorous multi-year environmental analysis, including extensive baseline scientific studies,” it added. “The project will also create employment opportunities for union labor and contribute local tax revenue that benefit communities on the North Slope, as well as significant state and federal tax revenue for many years.”

The Willow project underscores how difficult it has been for the White House to redirect the course of oil and gas development on public lands and off the nation’s coasts in a way that supports President Joe Biden’s broader climate agenda.

Initially gung-ho on a reform agenda that froze new oil leasing on federal lands, the Biden administration has backpedaled since its leasing moratorium last year was thrown out by a federal judge and rising oil prices have driven up energy costs.

Political leaders like Sen. Lisa Murkowski (R-Alaska) in the oil-rich state, where residents receive annual payments from state oil revenues, have thrown their support behind Willow. Its production could help replenish the flow of oil from Alaska’s once mammoth oil and gas fields on the North Slope.

Murkowski said in a statement that the Willow project is her “top priority” and that she would continue to hold the Biden administration “accountable to their commitment to see this additional environmental review through so that construction can begin this winter.”

Willow’s importance for the future of oil and gas in the Arctic can’t be overstated. The $6 billion project is one of several discoveries in recent years that spurred hope of an Alaskan oil and gas renaissance. Recently, an Australian company announced the discovery of a potential 1-billion-barrel oil and gas reserve south of Willow.

“Willow represents a near-term opportunity to help return the United States to energy independence at a time when our country desperately needs more domestic sources of oil and gas,” said Kara Moriarty, president and CEO of the Alaska Oil and Gas Association.

Moriarty added that the Willow project would “also boost Alaska’s economy,” and she urged Alaskans that “have long supported development of our oil and gas resources” to register their support for it with the Biden administration.

“Now is the time to speak up and let the federal government know how those of us who call Alaska home feel about projects like Willow: No one cares more about protecting our environment or safely developing Alaska’s resources than Alaskans,” she said.

But Willow has become a rallying point also for some Indigenous, climate and public land organizations opposed to the expansion of oil and gas in the western Arctic, a region warming at roughly three times the rate of the rest of the globe due to climate change.

A recent CAP report argued that the lifetime emissions from oil and gas produced at Willow would “dwarf” the climate benefits from wind, solar and offshore wind projects being rapidly deployed on public land and waters as part of the administration’s attempt to decarbonize the U.S. grid by 2035.

“If approved the Willow project would be bigger than any other proposed oil and gas project on our nation’s public lands, and it poses an unparalleled climate and biodiversity threat that puts President Biden’s climate legacy at risk,” said Kristen Miller, conservation director of the Alaska Wilderness League.

“No other oil and gas project has greater potential to undermine the Biden administration’s climate goals,” Itchoak said in a statement. “If this project were to move forward, it would result in the production and burning of at least 30 years of oil at a time when the world needs climate solutions and a transition to clean energy.”

That’s what makes Willow “a legacy setting project that will test whether the Biden administration is righting America’s course from a dangerous climate path,” Miller said.