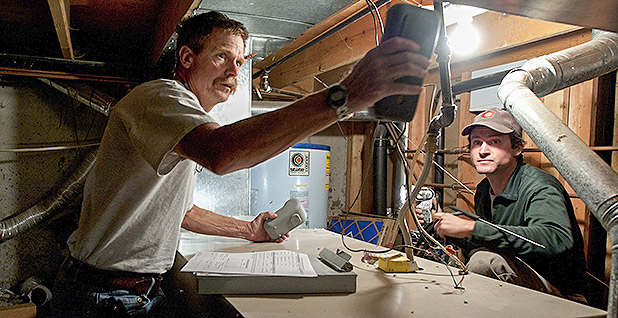 But it will be critical that the push avoids the missteps of past federal and state programs on energy efficiency, which haven’t always maximized energy savings or emissions reductions, according to analysts. Some environmental groups also said the administration could go further to promote energy-efficient buildings.

Biden’s American Jobs Plan, which would be funded by corporate tax increases and faces an uphill battle in Congress, would allocate $213 billion to develop, preserve and retrofit more than 2 million "affordable and sustainable places to live." It calls on Congress to support electrified new homes and projects, rehabilitate over 500,000 homes for low- and middle-income people, and extend tax credits to spur efficiency improvements in buildings.

Home efficiency upgrades would take place through block grant programs, the Department of Energy’s Weatherization Assistance Program and expanded tax credits, according to the plan. The proposal would also establish a $27 billion Clean Energy and Sustainability Accelerator — a financing tool, or "green bank," in some states — aimed at mobilizing private investment.

Although many states have passed energy efficiency standards for new buildings, about 130 million of the 137 million homes in the United States were built before 2000, prior to most modern energy codes, said Jim Tobin, chief lobbyist at the National Association of Home Builders.

The administration also wants Congress to pass the "Neighborhood Homes Investment Act," which would establish a tax credit to finance homebuilding and retrofits in eligible low-income neighborhoods. The bill has been introduced in the House and Senate by Rep. Brian Higgins (D-N.Y.) and Sens. Ben Cardin (D-Md.) and Rob Portman (R-Ohio).

"Just the sheer scale of the dollars involved, and the breadth of it as well, really stands out," said Ethan Elkind, director of the climate program at the University of California, Berkeley, School of Law’s Center for Law, Energy and the Environment. "Generally speaking, in theory, energy efficiency retrofits should be among the most cost-effective ways the federal government can spend money."

Still, "in theory" isn’t the same as in practice, Elkind said. Some energy efficiency programs have not yielded cost or energy savings as quickly as predicted, and the benefits have been difficult to assess in certain cases, according to Elkind.

"I wouldn’t say any of that to cast doubt on whether it’s good to invest in these upgrades," he said. "That’s just to say that the benefits are not completely quantifiable at this point. The data is still out there to some extent on some of these specific retrofit programs."

Efficiency measures faced scrutiny during the Trump administration, when it proposed eliminating the Weatherization Assistance Program in 2017. Critics of that program had charged that the benefits weren’t worth the upfront costs, that funds for weatherization had been mismanaged and that it overlapped with state programs (Greenwire, March 29, 2017).

Ideally, efficiency strategies should seek to identify "waste, fraud and abuse" and avoid duplicating state programs, said Nick Loris, deputy director of the Thomas A. Roe Institute for Economic Policy Studies at the Heritage Foundation, a conservative think tank. The omnibus spending measure signed into law late last year also included new efficiency measures, and it would be wise to see how those programs work before "doubling down," Loris said.

"If new investments in efficiency save money, they shouldn’t need help from the federal government. The exception is low-income families who may not be able to afford the upfront cost," Loris said in an email.

But Dan Reicher, a senior scholar at Stanford University’s Woods Institute for the Environment, said the administration is taking the right approach to efficiency by expanding existing programs.

"We should take advantage of what’s been learned over multiple decades in how to implement efficiency upgrades of people’s homes and commercial and industrial facilities," said Reicher, who was assistant secretary of Energy for energy efficiency and renewable energy under President Clinton.

The Biden administration could look to programs implemented by President Obama and in some states to maximize the impacts of its energy efficiency push, analysts said.

The American Recovery and Reinvestment Act, enacted in 2009, funded DOE’s Energy Efficiency and Block Grant Program for the first time and expanded the Weatherization Assistance Program, according to the Alliance to Save Energy. Through the Recovery Act, $3.2 billion in grant money went to local governments, states and tribes to develop energy efficiency and conservation projects, according to DOE.

States and cities used money from the Recovery Act to create incentive programs, some of which still exist today, said Lowell Ungar, director of federal policy at the American Council for an Energy-Efficient Economy.

An experiment and data

Although the Recovery Act was the most substantial federal investment in energy efficiency at the time, some of the programs generated "mixed results," Elkind said.

A 2017 study from the University of Chicago and New York University found that the costs of residential audit programs in Wisconsin, which were backed by the block grant program, exceeded energy savings and environmental goals (Greenwire, April 6, 2017).

Another study from researchers at UC Berkeley’s Haas School of Business in 2015 found that upgrading one’s home through a weatherization program in Michigan might not be worth the upfront costs. The energy savings from the program over 16 years covered less than half of the costs of weatherization, the study said (Climatewire, June 24, 2015).

Weatherization can be cost-effective and beneficial for homeowners, Elkind said, but some approaches work better than others.

"We hadn’t really tried that kind of a national energy retrofit program until Obama and the ’09 stimulus bill," he said. "To a certain extent, it was a bit of an experiment. We have more data now, and I think that puts the Biden administration in a better position."

California’s energy efficiency programs could also offer some lessons for the Biden administration, said Stephanie Pincetl, director of the California Center for Sustainable Communities at UCLA.

But there is little tracking of the state’s energy efficiency programs for utilities, which are funded by a small portion of electricity and gas rates, Pincetl said. Programs also are typically modeled in research settings, she said.

Ideally, the Biden administration should test programs in a real-world setting before they are implemented on a wide scale to ensure that it is accomplishing what it set out to do, Pincetl said.

"We’re throwing a lot of resources, at least in California, to this effort, which I think is very, very good, but we’re not really looking at it sufficiently and carefully to know what works and where," Pincetl said.

There could also be unintended consequences of efficiency programs if not done right, according to some researchers. One study in 2017 found that weatherization programs in multifamily homes in Boston that did not include other building improvements exacerbated indoor air pollution.

If low-income homes have gas stoves and lack exhaust fans in kitchens, for example, harmful pollutants could get trapped in the housing unit, said Jonathan Levy, a co-author on the 2017 study and professor and chair of the department of environmental health at Boston University. Electrifying home appliances in tandem with weatherization, which appears to be part of the administration’s plan, could be one solution to that problem, Levy said.

"If you do them all together, you can have cleaner indoor air, you can get energy savings, and you can get your reduction in greenhouse gas emissions," Levy said.

Jacob Corvidae, acting director of the U.S. program at the sustainable energy nonprofit RMI, said the American Jobs Plan’s call for "electrified" new housing units in addition to energy-efficient ones could be significant for reducing emissions from buildings. However, any kind of mandate for all-electric buildings could face resistance from utilities, the natural gas industry and homebuilders.

"[We] need to make sure [electrification] is a major focus so that we’re not creating new housing with the health risks related to burning fossil fuels in our homes, as well as avoiding the pollution that leads to climate change," Corvidae said.

While efficiency advocates praised the Biden administration’s attention to building new energy-efficient homes as well as retrofitting existing ones, some said they hoped the measures were just the beginning.

Building and retrofitting 2 million homes would be a "good down payment" to curb emissions from commercial and residential buildings, said Wes Gobar, deputy press secretary for Evergreen Action. But a stronger push is needed to help jump-start the economy; advance racial justice; and reduce the carbon footprint of buildings, which account for 12% of greenhouse gas emissions, he said.

"[We] have a national shortage of more than 7 million affordable homes for our nation’s 11 million-plus extremely low-income families," Gobar said. "Fighting the climate crisis will also require a retrofit mobilization over the next decade to reach most of the 140 million homes across the U.S. Congress should up the ambition on these numbers to match the scale of these needs."