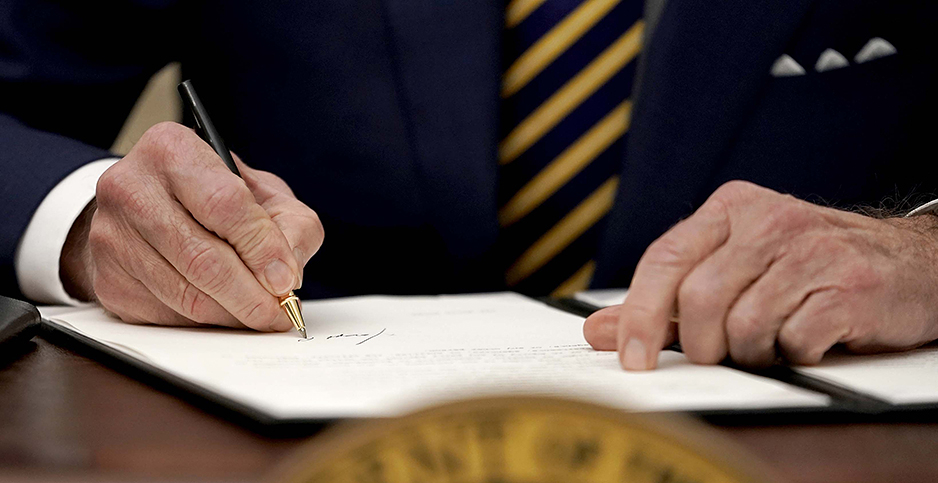 President Biden this afternoon will sign an executive order that aims to boost support for American industry, including by advocating for the Jones Act, an old shipping law that has divided lawmakers.

The action is part of a week of executive orders from the president on issues including the environment and climate change.

Gina McCarthy, Biden’s domestic climate czar, said over the weekend that the administration wants to address climate change in "every single piece of the federal budget" (see related story).

"We’ve already sent signals on the things that we don’t like that we’re going to roll back, but this week, you’re going to see us moving forward with what’s the vision of the future," McCarthy said during an event at the U.S. Conference of Mayors’ virtual Winter Meeting.

Today’s order reads, "The President is taking action to reset the U.S. government’s longstanding approach to domestic preferences to create an approach that will remain durable for years to come and grow quality, union jobs."

The order says the administration will ensure "that when the federal government spends taxpayer dollars they are spent on American-made goods by American workers and with American-made component parts."

Biden is expected to deliver remarks "on strengthening American manufacturing" later this afternoon at the White House, according to his schedule. Vice President Kamala Harris will also attend.

Today’s order also articulates support for the Jones Act, a 100-year-old law that requires vessels traveling between U.S. ports — including those transporting natural gas, wind turbines or other products — to be crewed and owned by American companies.

Since none of the ships are made in the United States, the law essentially bans shipments of natural gas from the south to Massachusetts, prompting free-market critics to complain about increased energy costs in the Northeast.

In recent years, former President Trump toyed with the idea of repealing the act but abandoned the idea after a small group of Senate Republicans objected.

The Biden order also aims to leverage federal purchasing power to "proactively invest in American industry." Specifically, it directs federal agencies to close loopholes surrounding "buy American" laws, which determine which products were sufficiently made in the United States.

The order calls for an Office of Management and Budget post to oversee the government’s made-in-America policy approach. It also mandates stricter enforcement.