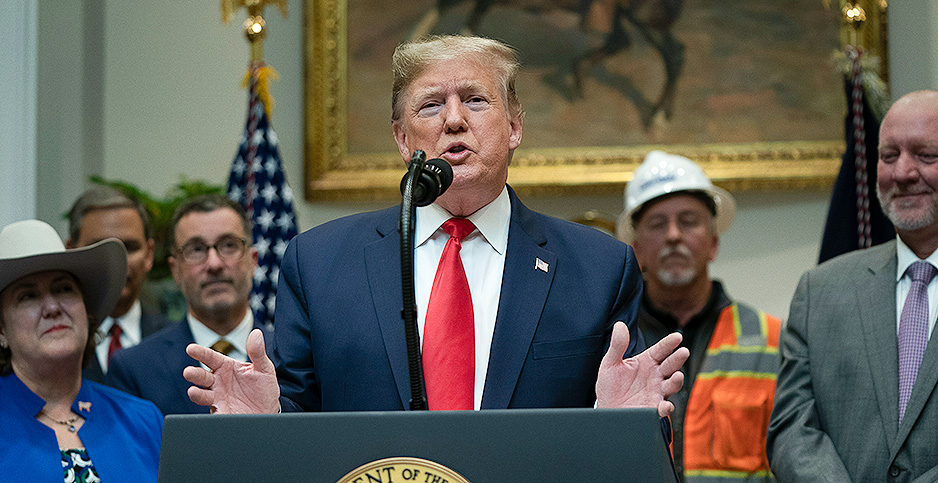 Battles over President Trump’s climate and energy actions could be stuck in legal limbo once President-elect Joe Biden steps into the Oval Office and begins paving the way for new standards on public land use and greenhouse gas emissions.

During his four years in office, Trump weakened more than 125 environmental policies and regulations, using his executive power to scale back major safeguards against pollution, vehicle emissions, and oil and gas development — all of which were challenged at every turn by blue states and environmentalists.

Biden has promised to take bold steps to undo the Trump administration’s backtracking on climate and energy policy, and experts say his first moves will likely look a lot like Trump’s when he took office in 2016.

"There is a playbook, and it’s the Trump administration playbook," said Richard Revesz, director of New York University’s Institute for Policy Integrity.

Beginning early next year, the White House will likely ask the courts to freeze lawsuits over Trump actions while the new administration crafts replacement rules and policies more in line with the Biden campaign’s climate goals, Revesz said.

The strategy would be similar to the one the Trump administration employed when it asked the courts to stop litigation over the Obama-era Clean Power Plan as it worked to repeal and replace the rule.

Jean Su, staff attorney at the Center for Biological Diversity, said speedy reversals and new Biden rules will be key strategies in scrapping the Trump policies that her group has fought in court. But any sweeping orders from Biden will also face lawsuits, she added.

"There will be a lot of, hopefully, really good pushes from the Biden administration to take pretty serious progressive action on energy," Su said. "We can certainly expect that those will be challenged by conservatives as well, and … the progressive side will definitely be on defense."

Legal experts at Harvard Law School’s Environmental and Energy Law Program have cautioned the incoming Biden administration to take a more methodical approach than its predecessors. The Trump administration had some early stumbles in court when it tried to press pause on Obama-era rules before beginning work to replace them.

"It’s not as simple as just saying, ‘We think we are going to do something with this, so we want to stay this litigation,’" said Hana Vizcarra, a staff attorney with the Harvard program. "You can’t just eliminate regulations or litigation in that manner.

"When the court decides the case is moot, that’s because the agency has moved forward with changing the regulation, and it’s no longer in force," she said.

The Biden administration will need to decide which legal battles it will focus on first, said Caitlin McCoy, another staff attorney at Harvard. It may choose to emphasize litigation that has been going on for longer.

Even under a federal court system filled with more than 200 Trump-appointed judges, requests to halt pending litigation against old rules will likely be honored, leaving breathing room for new decisionmaking, said NYU’s Revesz.

Biden will "have to craft regulations carefully, keeping in mind the composition of the courts, which I’m sure is a challenge that EPA under the Biden administration will understand and carry forward," Revesz said.

Some legal experts say the Biden administration should prioritize a proposal to replace EPA’s Affordable Clean Energy rule, since litigation over the regulation is one of the most advanced Trump-era legal challenges.

The U.S. Court of Appeals for the District of Columbia Circuit held marathon oral arguments last month on both the repeal of the 2015 Clean Power Plan and the replacement ACE rule, putting the court on track to issue a ruling next year (Energywire, Oct. 9).

Opponents of the ACE rule asked the D.C. Circuit to send the regulation governing carbon dioxide emissions from coal-fired power plants back to the agency for a redo.

So far, it’s unclear what approach the Biden administration would take to control power plant emissions.

Green groups and blue states are hoping the Biden administration will soon reverse course on the White House Council on Environmental Quality’s implementing rules for the National Environmental Policy Act.

The new regulations, which are now in effect after an unsuccessful attempt in federal court to block them, govern agencies’ consideration of the environmental impacts of major projects. The reforms were meant to streamline and speed up the permitting process for federal projects.

The rules spurred a number of lawsuits over CEQ’s decision to eliminate language on cumulative and indirect effects of projects, among other changes (Climatewire, Sept. 14).

Biden is expected to start from scratch with fresh regulations, and experts suggested new regulations could be an avenue to also help advance his administration’s energy and infrastructure priorities.

Even if the Biden administration moves quickly to implement new policies, lawsuits over Trump actions could linger dormant in the background, with the potential to eventually spring back to life.

If a court decides to freeze Trump-era litigation as the Biden administration drafts new regulations, that bench could later revive the earlier lawsuit if the Biden rule hits a legal roadblock.

Such a scenario occurred this year in lawsuits over methane regulations for oil and gas development on public and tribal lands.

Climate advocates are eager to see Biden reverse Trump’s rollback of greenhouse gas regulations for cars, which Democratic state attorneys general and green groups argue was hastily conceived and based on faulty mathematics.

The rule prompted a cascade of federal lawsuits.

Legal experts have noted that Trump’s SAFE Rule could face hurdles in court due to its cost-benefit analysis, which challengers argue does not support the administration’s decision to scrap the Obama standards.

The Biden administration could move quickly to reverse course on a Trump administration order intended to prod fast action on the Keystone XL crude oil pipeline.

Environmental groups and tribes recently failed in their bid to get the U.S. District Court for the District of Montana to toss out Trump’s presidential permit for the pipeline’s U.S.-Canada border crossing, after a judge expressed "serious questions" about the challengers’ legal claims (Energywire, Oct. 20).

The permit, which came in the form of an executive order and not a regulation, followed a decision by the same Montana court to nix the State Department’s cross-border permit for the pipeline on the grounds that the underlying environmental analysis did not properly account for climate impacts, among other issues.

Biden could unilaterally revoke Trump’s permit for the 1,200-mile project that would connect Canadian oil sands to the U.S. Gulf Coast. He could then order his Interior Department to revoke a right of way for the pipeline to cross federal land, said McCoy of Harvard.

The president-elect could also use an executive order to walk back a Trump directive on transboundary facilities and return authority over those sites to the State Department, ensuring projects are once again subject to NEPA and Endangered Species Act review.

Biden could also put to rest the Trump administration’s tussles over California’s authority to regulate carbon emissions though international pacts and vehicle standards.

The Golden State has played both offense and defense against the Trump administration’s decisions to weaken climate action.

The 9th U.S. Circuit Court of Appeals is currently reviewing a lower court’s decision to strike down an effort by Trump’s Justice Department to halt a carbon-trading agreement between California and the Canadian province of Quebec (Climatewire, Sept. 16).

Litigation is also pending at the D.C. Circuit over the first part of the SAFE Rule, which eliminated California’s ability to set its own stricter greenhouse gas emission standards for cars (Greenwire, Sept. 10).

California Attorney General Xavier Becerra (D) has also launched more than 100 lawsuits over the Trump administration. The office is expected to shift its legal posture to become a key ally of Biden’s environmental actions.

***Read more about power players and policy changes after the elections in the E&E News special report POWER SHIFT***.